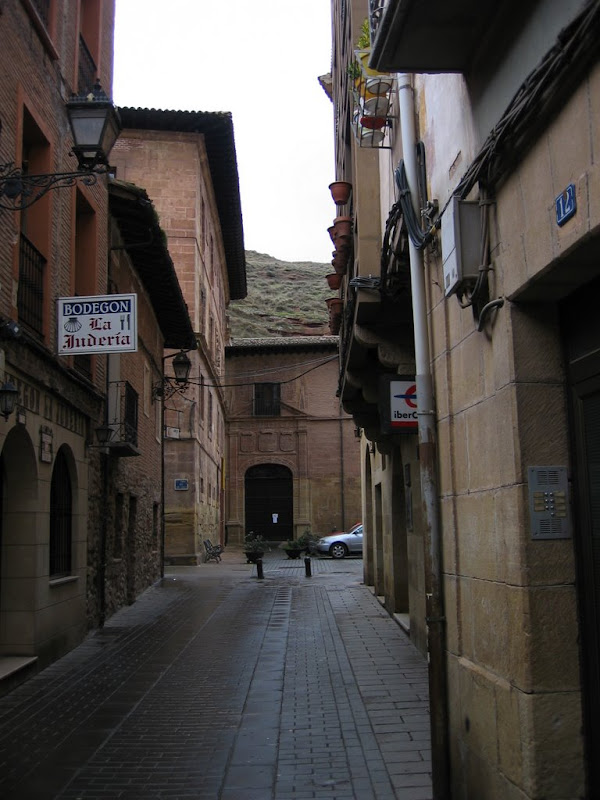 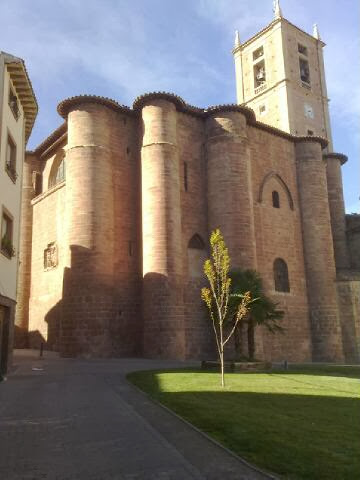 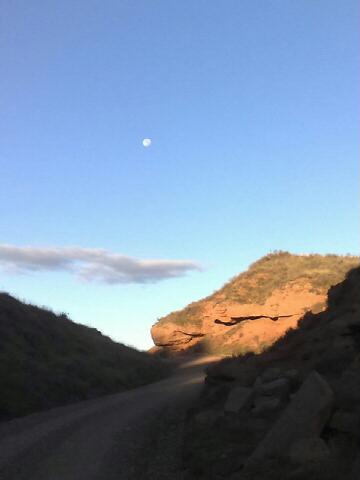 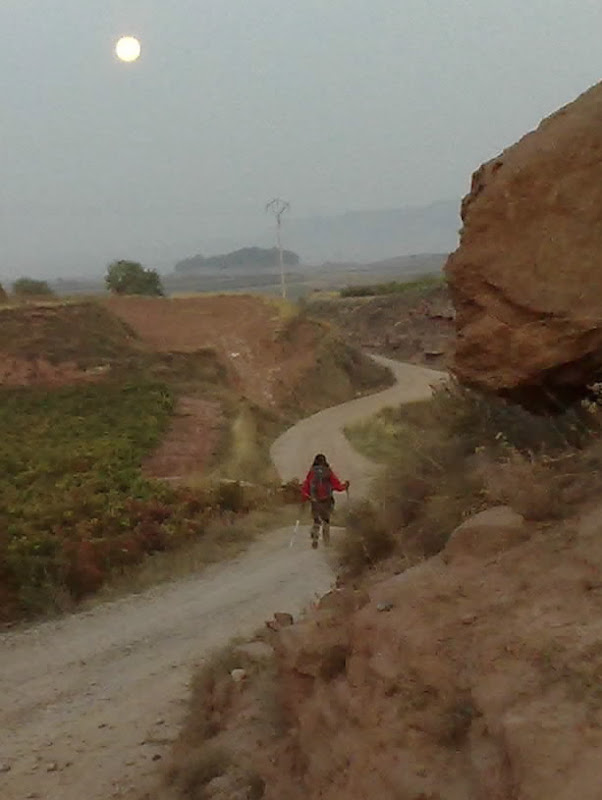 
Just west of Navarette stood the Romanesque doorway of the old pilgrims’ hostel, now the cemetery entrance. Nearby a plaque commemorates a Belgian pilgrim recently killed here en route to Santiago. The rain had stopped so the 16 k hike was pleasant, but muddy, crossing through vineyards beneath a deep blue sky. Nájera had a remarkable site along the river Najerilla at the base of high red sandstone cliffs. The Arabic name means place between the rocks. The town’s major monument is the medieval monastery of Santa Maria where the French women and I had planned to meet and stay. Unfortunately it was closed for renovation.

While wondering where my friends might have gone a kind Spanish workman led me by the hand to the new municipal albergue a few blocks away. Made from prefabricated, one story units it held 98 pilgrims. Outside on a bench sat my friends. We celebrated our brief reunion with dinner; they would return to France the next day planning to continue at some future time.


The 14 k hike to Nájera was windy and wet; light rain turned into a hint of snow. While trudging in poncho, woolly hat and gloves yesterday’s intimations of spring seemed fantastic. It was great to get out of the weather into the large municipal hostel. Assembled from prefabricated one-story units it could hold 100 pilgrims; there were about 10. The kind hospitalero turned on powerful ceiling blowers for heat and helped everyone dry out his boots. Hot water for showers was plentiful.


After Ventosa I plodded through cold rain and thick mud to Nájera. My legs were better, but I had tummy problems. Twas ever thus! This is a large municipal albergue made from prefabricated units to hold 100 pilgrims; tonight there are only an older Spanish man and the hospitalero plus myself. After closing two years for restoration the impressive riverside monastery, Santa Maria la Real, now is reopened as a museum. It war begun in the 11th century and built from local red stone. Filled with dimly lit sculpture and tombs to me it seemed almost frightening to visit alone. What a relief to exit into daylight despite the rain!


On Monday Polo and I walked across the red earth and vineyards of Rioja to Ventosa where I stayed last year in a great private albergue. Passing by Navarette I passed the ruins of the medieval pilgims hostel and on the far side of the hilltop town the doorway from the hostel is now the entrance to the cemetery. Nearby is a recent memorial to a Belgian pilgrim killed on the road.

Unfortunately the Ventosa albergue was closed so we continued on to Nájera. At the municipal albergue which holds 100 we three were the only pilgrims. Polo cooked a good hot dinner for us.


Today the sky was cloudy and the wind cold hiking to Nájera. Innumerable vineyards were planted in heavy, deep red soil. Truly terra cotta. It can be exhausting to walk through this stuff which really sticks to your boots! My legs ache.

Tonight there several 'new' pilgrims with the Canadians and me; 3 Spanish guys and 2 Spanish women. The historic albergue used to be in the famous monastery, Santa Maria la Real, built against the imposing red sandstone cliff. Now handsomely restored the monastery has become a museum. The present albergue located on the riverbank seems to have been recently assembled from prefabricated units, but tonight there is neither much heat nor any blankets. I'll wear my wool hat to bed and try to keep warm!


Today was tiring walking 17km out of the vineyards towards the magnificent red cliffs here at Nájera. On the way nestled in the woods was a strange cluster of stones purposely grouped and resembling surreal gourds.

First to arrive at the municipal hostel I quickly took a hot shower and now anticipate a very long siesta, perhaps until tomorrow morning, while I ponder those stones.