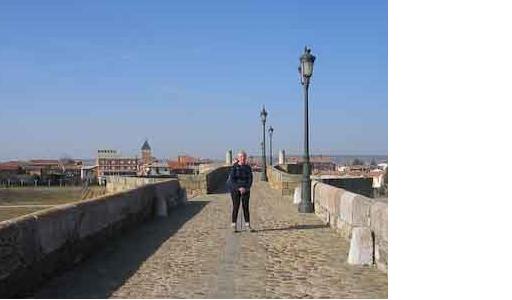 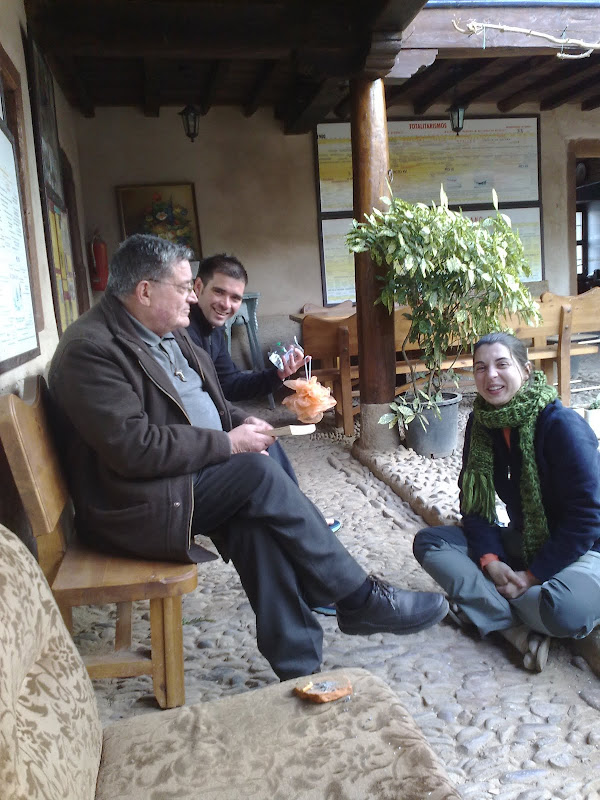 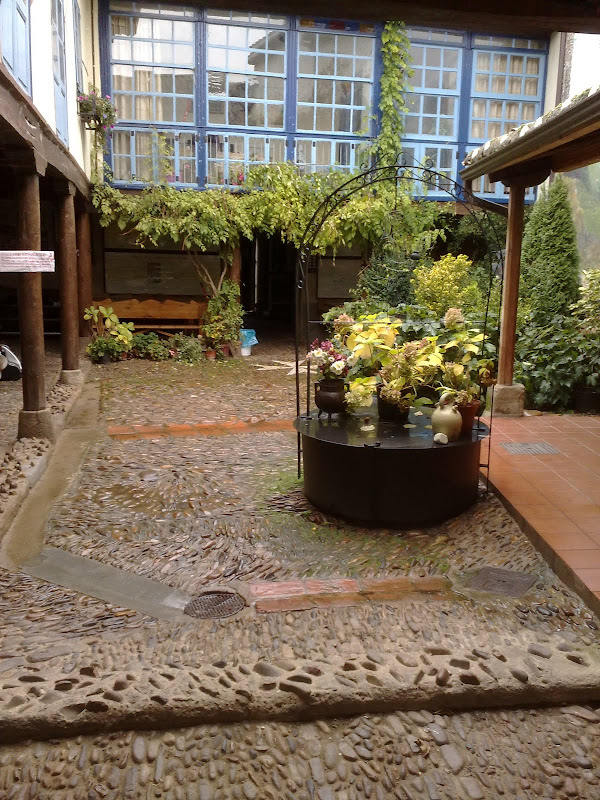 
In the mirror the next morning my face appeared tanned and slimmer; I briefly thought ‘not too bad, considering’. Unfortunately pride goeth before a fall…

After 10 k on the Camino and crossing the long medieval bridge over the river Orbigo we entered the town of Hospital de Órbigo. Attempting to photograph the parish church I lost my footing and fell head first onto the irregular pavement! My pack crashed into my right shoulder. I was flat on the ground; my forehead and shoulder hurt like hell! Gently Mirta and a Mexican pilgrim helped me up. An egg was quickly swelling on my forehead (by day’s end I resembled Cyclopes). Out of nowhere a kind Spanish couple appeared and the man said “Don’t worry, madam, I am a Chevalier de Santiago and will help”. Examined at the regional hospital, I was told to rest, and see a doctor again the following day.

The Spanish couple graciously invited the Mexican, Mirta and me to lunch at their house. We met their grown sons and had a trilingual conversation. Our host explained that the Chevaliers de Santiago are a group of Catholic men, who have been nominated to become members and who pledge to foster the Camino and help all pilgrims. In the Spanish custom lunch lasted at least four hours! With my left hand I alternated holding ice to my head and trying to eat since my right shoulder and arm were extremely painful. Nevertheless, how, lucky I was to be able to move and to have found another ‘guardian angel’. That night Mirta and I spent in a pleasant new private albergue.

Next morning while I was still on my bunk the Chevalier and the local priest walked into the dorm to see how I was doing! Next the Chevalier and his wife took me to the local doctor whose office was adjacent to the church. When all three of us entered the examination room, the Chevalier said to the doctor “Another one has fallen!” It seems that in recent months others had also fallen on the same new paving where I stumbled. The doctor checked my eyes, gave me simple pain killers and wished me good luck. Later Mirta and I ate again with the Chevalier and his family. Never will I forget their kindnesses and spontaneous gracious hospitality. It was heartfelt caritas.


Walking was easy on the flat Camino in warm sunshine. We stopped after 10 k at Hospital de Órbigo where I had fallen in 2004. The parish priest kindly unlocked the albergue for us. Six men and I were the only pilgrims. By night the place, which was built around an open patio, resembled a setting from Tennessee Williams; all their stuff was spread across the patio! One Dutch guy who had just begun his journey argued that my second pilgrimage was mere tourism! I strongly disagreed and tried to defend my own motivations explaining that I walked the Camino in respect and awe.


This morning we four ate a quick early breakfast together in the still frigid albergue. Then the two French guys left going east towards Leon while the Spanish girl, named Mayte, and I continued west. The way was easy and the path wide, but the weather has changed to cloudy and grey with a hint of rain.

At San Martino del Camino Mayte and I stopped at a private albergue for a delicious and copious second breakfast. It was also a bargain! Huge cups of tea, lots of hot toast, muffins and special homemade jam for 3 euros each. Our hostess remembered me from stops during earlier Caminos.

Around lunchtime we arrived at Hospital de Órbigo where I fell in 2004. The parish albergue which is in part of the manse has been handsomely refurbished with new bedding, kitchen and showers. The townspeople are very welcoming and the priest most gracious and VERY talkative. Two other pilgrims arrived later; a German boy and a Spanish man. We are all sleeping in the same small dorm which is HEATED. It is very cozy!


After the rain Wednesday dawned clear, but cold. Late en route I met again a Mexican mother and daughter who now live in Paris and have been walking since Le Puy in France. We three had a welcome hot coffee in Hospital de Órbigo where I planned to stay.

Newly redone the parish albergue is very pleasant and the priest always most pleased to greet pilgrims. One other pilgrim was an Australian woman who had also walked from Le Puy to Roncevalles and due to time constraints taken the bus to Leon where she continued trekking. On the Camino everyone moves as he wishes; only the last 100km MUST be walked in order to receive the treasured Compostela or pilgrim certificate in Santiago.

Yesterday's path gradually started to climb crossing the red earth towards the mountains on the western horizon. Snow covered and beautiful to see from afar I wonder how difficult they will be to cross THIS time. During my 5th Camino a few pilgrims and I were snowed-in at Foncebadon for 2 memorable days of pure white-out when the drifts reached over a meter!


Today our alternative steps continued but, now to the north across flat fens and through heavy downpours of rain to Hospital de Orbigo. Each time I arrive in this historic town I cringe remembering my most unfortunate 2004 arrival when after falling in front of the church I received a giant Cyclopean "shiner"! Fall free we all stayed at the pleasant parish albergue. The night was COLD so wearing a wooly hat, thermal top and polar pants to bed was necessary for the first time this camino; how cozy it was to have such "luxuries"!


I walked west out of Leon visiting the extraordinary contemporary church at Virgin del Camino on route. The town is named for a small 15th century statue of the Virgin holding the dead body of Christ in her arms. Today this is in a handsome church designed in the 1960s by Francisco Coello, a Dominican monk and follower of the Brutalist architectural style of Le Corbusier. It is basically a simple box with giant sculptures of the Apostles crossing the west facade. Recessed windows of glorious crome yellow glass warm the restrained interior. Impeccably maintained the church is an architectural gem as well as a haven of peace within a chaotic suburb.

Opposite the church I joined the alternative camino route to Villar de Mezarife. It was very pleasant to escape the N120 highway noise and suburban sprawl while crossing peaceful moors. Unfortunately the albergue I chose was not the greatest, but that's the luck of the draw!

Today dawned cold and crisp, but clear. However the forecast for the coming night is 3 below freezing! Walking beside endless fields of corn and sugar beet I was, unfortunately, victim of the 'trots'. Chaos!! Thus at Hospital d'Orbigo I opted for a new HEATED private place called Albergue Verde which is another gem. Reassembled two years ago from old adobe barns it is hyper clean and VERY comfortable. Vegetables from their surrounding organic garden were prepared by the charming hospitalera for our most delicious dinner. What a happy find!