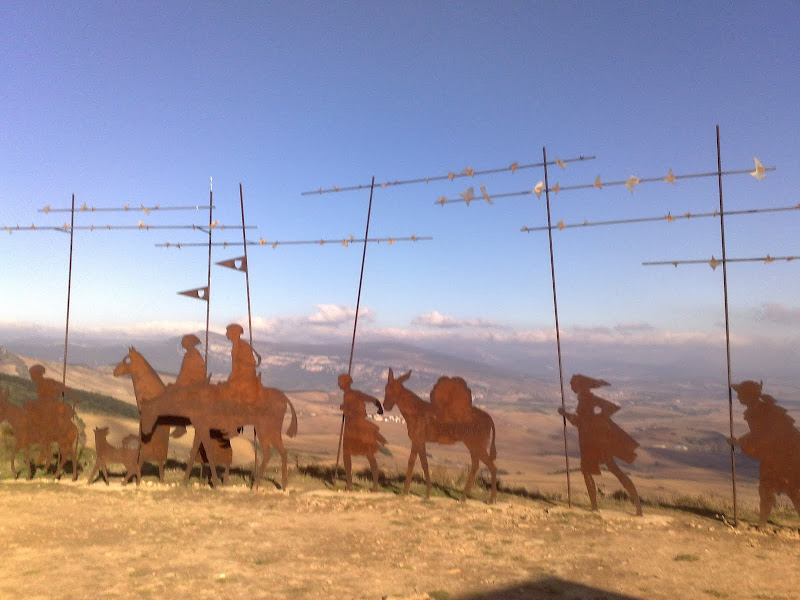 
Up well before dawn I was nervous walking in the dark. Today’s trail would climb up the Sierra del Perdon, which in 2004 had been an ordeal. Eventually a glorious sunrise exploded on the eastern horizon; a coral orb began to light the now pale blue sky while I ate a breakfast cereal bar, drank a bit of water and hoped for the best. Then the trail began to really rise. Mid morning at last the mountaintop was reached with its wonderful line of sculpted metal pilgrims in silhouette. Continuing down to Obanos was not too difficult. Much of the sunny afternoon was spend sitting in the park waiting for the pleasant albergue to open. An Argentine couple and I were the only pilgrims.


Nikola and I walked off the Camino Frances on back roads and lanes to Obanos. We're staying in a b&b or Casa Rurale since the albergue is closed until spring. The weather was glorious with sun and clear blue sky. Unfortunately I had the "trots" in the middle of nowhere; what a mess! After a late lunch in a timeless, atmospheric cafe, Meson del Camino, in Eneriz we continued on the Camino Aragones towards the wonderful church at Eunate. Lost in the countryside this small, octagonal and Romanesque structure is a mythic place. The destinctive design may be based on the Church of the Holy Sepulchre in Jerusalem. Some year on a future Camino I must sleep at Eunate.


Today beneath clear windy skies I crossed the Alto del Perdon. This stage on the Camino truly shakes out the hardy. Climbing up is no worse than the Ibaneta into Roncevalles, but descending is pure hell across scree for a couple of unforgiving km!

Gone are all the holiday walkers; the rest are out for the long slog west. Tonight I am in a pleasant private albergue near Obanos. My dorm-mate is a Quebecoise who has been walking since mid August. Eight weeks ago she started from Puy in France and will stop tomorrow but plans to continue again next year. Thus we who love the Camino forever dream of another stage.


This route was really TOUGH. Although it began with a deceptive pastoral path it soon became pathless churning mud on the infamous Alto de Perdon. Cold white fog hid any view as alone and thoroughly frightened I plodded on balancing with my invaluable walking stick. Almost by instinct precariously and repeatedly I slowly lifted each heavy mud-covered boot. At last on the windy summit I ate a chunk of chocolate and gulped some water. Rain poured down.

Next began the even more hellish descent. Scree and multitudes of tennis ball size rocks covered the treacherous downward muddy path for the next few kilometers. Once again the walking stick was invaluable for balance and for probing to find solid footing. Finally the path became easier although the rain never ceased. When eventually I staggered into the welcoming private albergue near Obanos what a true pleasure it was to be out of the weather and to simply sit !