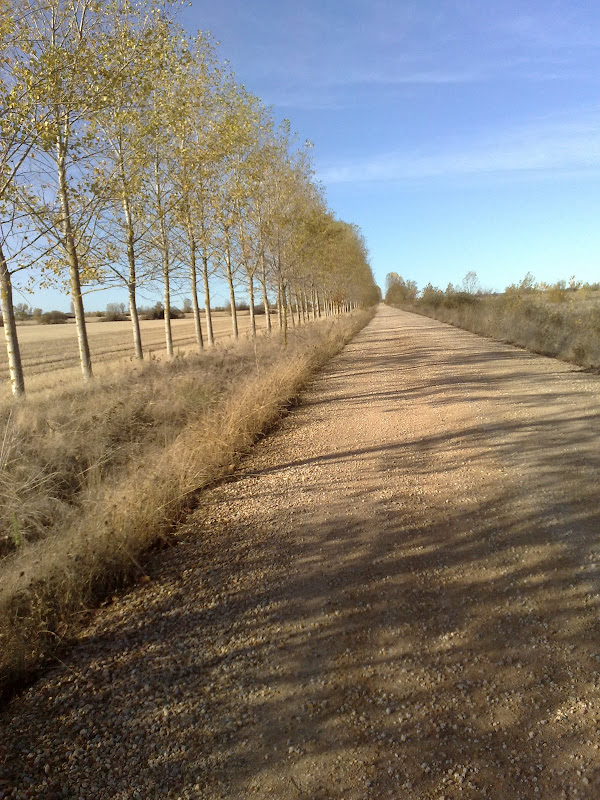 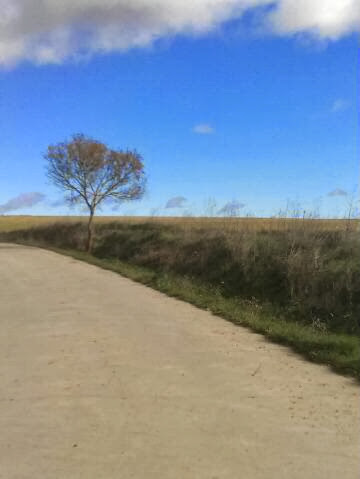 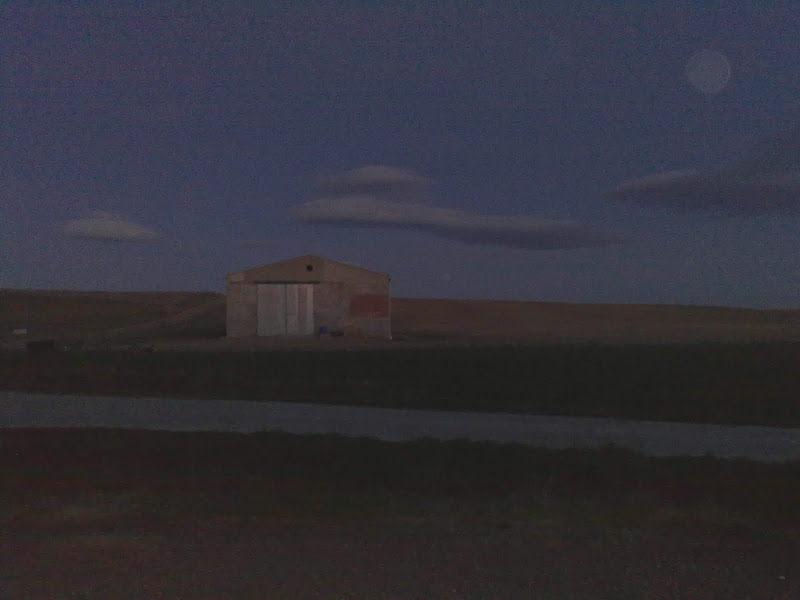 
Next morning we visited the handsome Monastery of San Zoilo on the western edge of town across the river Carrion. This monumental complex today is in part a luxury hotel, where we treated ourselves to an elegant coffee; another part houses the Centro de Etudios del Camino de Santiago, a research center and library. The monastery chapel and splendid 16th century cloister have been preserved. The Quebecoise said a hasty “au revoir” and caught a bus to Leon. She would cover in an hour and half bus ride what would take me a week to walk! I continued alone along the trail.

Following an old Roman road, the Via Trajana, this perfectly straight section of Camino was paved. There was nothing but fields of grain and me. Lonesome I waved to a tractor across the distant fields. After 16 k which seemed endless I reached the tiny hamlet of Calzadilla de la Cueza. I stopped at the pleasant, private albergue. Nearby was the only restaurant. A man eating at the table next to mine smiled. “Oh it’s you!” he said. He then explained to his wife that he had seen me earlier while riding his tractor. Small world, indeed!


We had breakfast coffee in the old Monastery of San Zollo. During the Middle Ages this had been a pilgrim refuge; today it combines a luxury hotel and Camino research center. Walking 16 k to Calzadilla de la Cueza in milky sunshine was a pleasure; the straight, flat path followed an antique Roman route. The hospitalero was most welcoming and the municipal albergue warm and comfortable. The one other pilgrim was a doctor from Indiana; unfortunately he had bad blisters. The four of us happily consumed a copious meal together in the only bar/restaurant.


The 18 k to Calzadilla de la Cueza was bleak, flat and very windy. Much of the straight path follows an old Roman road which once linked Bordeaux and Astorga. After lunch in the local bar-restaurant, I relaxed alone in the municipal albergue. Niki sent an email; she has made it to Leon! At least thirty years younger than I, she can walk much faster than I. Ah, youth. ...A new group of Spanish pilgrims has just arrived in the dark. Hopefully some heat will also arrive soon. It is cold in here!


After a day of walking along an old Roman route Polo and I have arrived in Calzadilla de la Cueza. The hospitalero is a nice Italian guy who speaks English and will make us dinner since the on restaurant in town is closed until the season.

A new pilgrim has joined the troop. Named Tom he is from Cologne and speaks English. He only began 4 days ago in Burgos and has huge blisters. Like most first timers he thought that the daily distances cited in the guidebooks were sacred and tried to do 40 km his first day. Now he can hardly move.

I must be one of the very few pilgrims who starts slow and very easy for the first week.

ps...Apparently someone has posted a reference to this blog, appropriately called "Winter Pilgrim" on another site. When we checked the SiteMeter at the bottom of my blog it appears that nearly half the viewers were referred from the site called "All about the Pilgrimage to Santiago". It is run by the British Confraternity of St James. In the several weeks my blog has been running it is already getting half as many hits as our own B&B web site gets after 8 years! That shows how much interest there is about the Pilgrimage.

Please do leave comments when you pass by here. The exchange of views is in the spirit of the Camino, and I appreciate it.


Yesterday's Camino basically followed an old Roman route to Calzadilla de la Cueza. It was an exhausting 20k. I walked with Stine a Danish pilgrim who resembled the aviatrix Amelia Earheart wearing a chic black walking suit and tìght cap. Gerry could not walk; he was too sick.

There was one Spanish pilgrim in the albergue and the same hospitalero as two years ago who cooked dinner for us. He certainly kept the place warm; in fact it was tropical!... In the evening across the hills there was a surreal moonrise which resembled painted theatrical scenery. Magic.