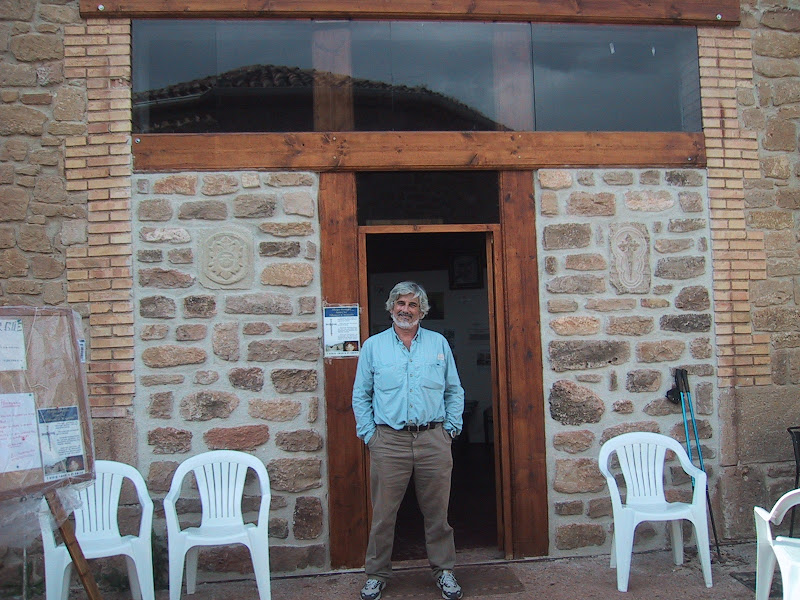 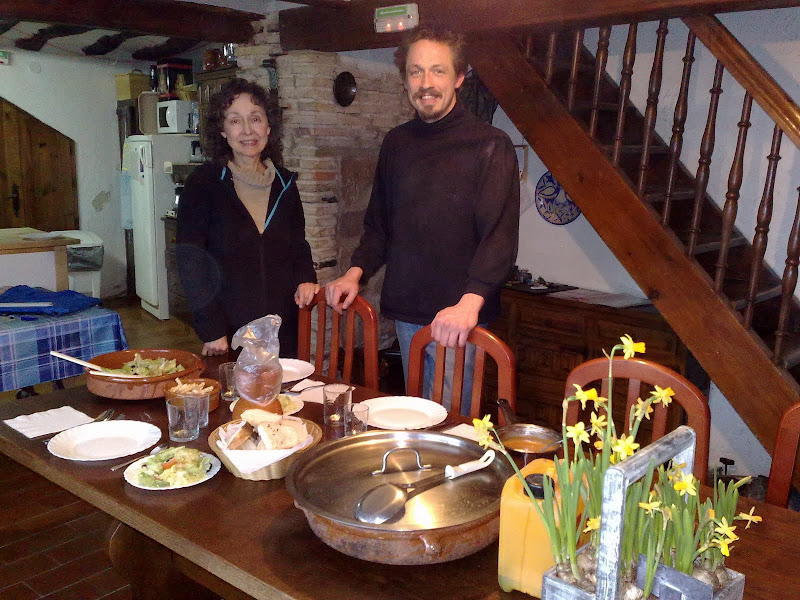 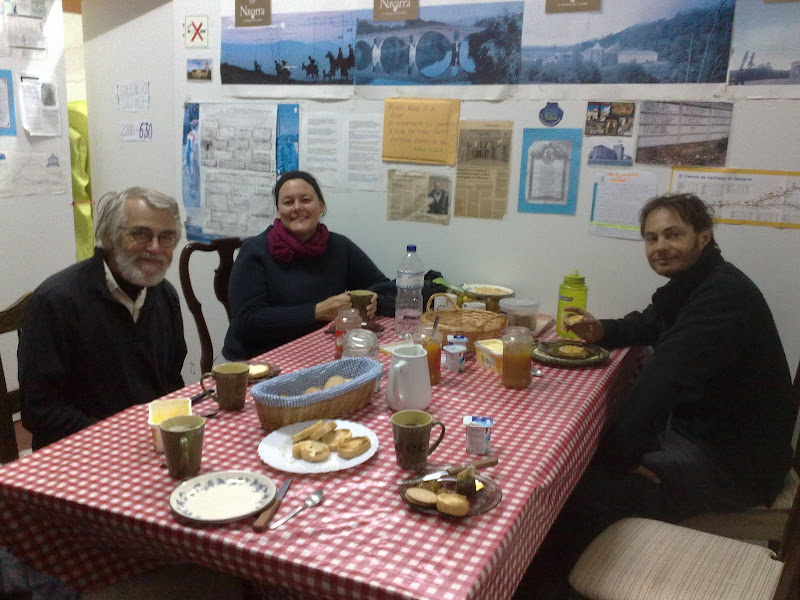 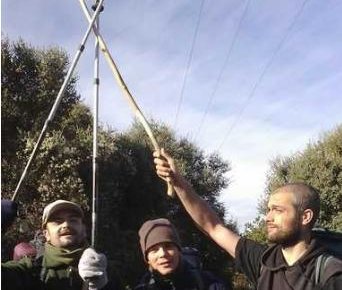 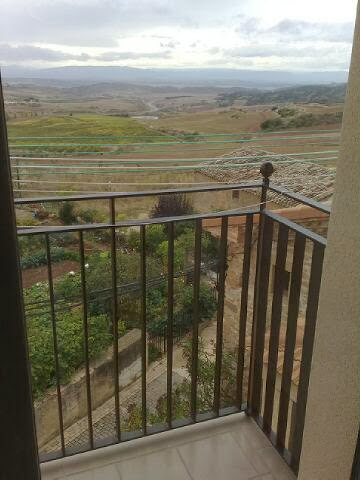 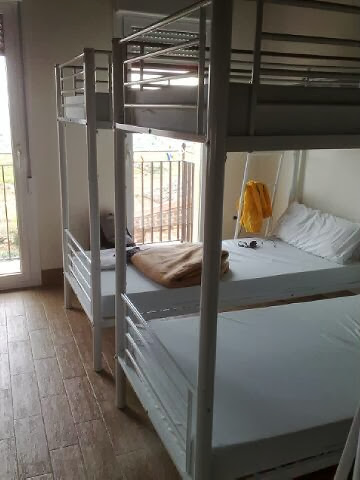 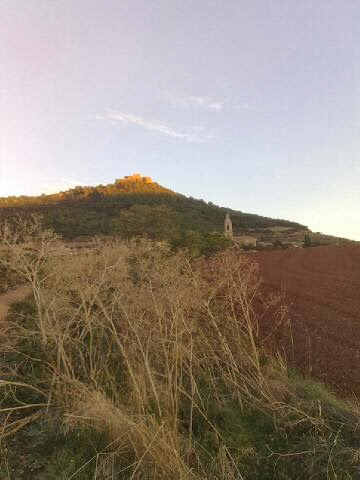 
This day would prove to be both aesthetically and socially perfect. 5 k west of Estella I watched as dawn lit the isolated monumental abbey of Irache. After circumscribing the exterior 12th century buildings I entered the Romanesque church. It was superb; Cistercian and unadorned, the stone walls and imposing pillars were illuminated by a few slender alabaster windows. Peace reigned. It was a privilege to experience such a special place.

Continuing on the next 7 k of route climbed through vineyards to Villamayor de Monjardin. Tired I stopped at a storefront shelter for a welcome drink. Upon discovering that this was an albergue run by the parish church I stayed. It was so tiny that the roadside was the dining ‘room’. The vivacious Spanish housefather hung his wash in the churchyard. As the afternoon passed other pilgrims staggered in. The housefather cooked a simple meal for all; we shared it outside sitting together in the dark. There were a few Spanish boys, a young couple from Venezuela, one Spanish woman and a Norwegian. This darling blond Norwegian woman turned out to be a Lutheran priest! Great human mix and vibes !


At the abundant wine fountain in Irache other tippling pilgrims and I shared an early morning drink. Refreshed I visited the massive Romanesque monastery complex begun in the 11th century. Now partly used as a cultural center, the interior of the church is simple and pure, the later fan vaulted cloister more elaborate. I stopped in the early afternoon in Villamayor de Monjardin at the parish albergue. This simple place offered welcome trail-side seats and hospitality to every passing pilgrim. The hospitalero was from Switzerland. She and I talked for a long time about life and the Camino.


I left Estella just after sunrise. At long last the weather was wonderful with a clear azure sky and no wind. Perfect for walking! The landscape has changed with many more vineyards and on the far horizon snow-topped mountains. When passing the impressive monastery at Irache which I had visited on earlier Caminos, I didn't wait in the cold for the necessary hour when it would be open. Soon the three Spanish guys passed saying "adios". I'll miss their hearty presence.

Since the parish albergue in Villamayor de Monjardin is closed now I am staying in another pleasant albergue run by a Dutch group. The two hospitaleros are very gracious and friendly. They cooked a delicious 'ristafel' which we shared with much talk about our personal beliefs. The only problem is the heating system has just been installed and is not yet working correctly. This dorm is FREEZING!


Sunday after walking through Estella I stopped at the recently restored Irache monastery. The white interior is now splendidly pristine. Then through vineyards planted in red earth under cold autumn sunshine I trudged up to Villamajor de Monjardin.

Staying at the parish albergue; small and cosy it is in an old storefront. We are six pilgrims; two Germans, one French, one English, and one other woman, also American. Over welcome cups of hot tea all shared multilingual travel tips as well as many philosophical musings.


Yesterday after an early morning walk through Estella and revisiting the nearby Irache monastery I stopped at Villamayor de Monjardin, another hilltop village. In the past I have enjoyed staying in the extremely basic but humanly warm parish albergue. Unfortunately, since the roof recently collapsed, it was closed. Thus I stayed with a Dutch fundamentalist group who offered hyper clean facilities plus delicious food and a completely different atmosphere. Nevertheless I missed the more relaxed yet authentic parish caritas.


West from Estella this morning grew several lush beds of giant salsify and ripe tomatoes. How tasty they looked in the late autumn golden sunlight. Imagine my delight when I asked about lunch possibilities the friendly hospitalero in the new Villamayor de Monjardin private albergue offered me a splendid tomato still warm with sun from his father's nearby fields. This simple kindness meant a lot to me and that tomato when cut and drizzled with fresh olive oil was MOST delicious.


Europe will go on winter time early Sunday morning, gaining an extra hour of sleep as dawn arrives at 8 am. From now until late December however it will be dark earlier every evening. I stopped once again at the new private albergue in Villamayor de Monjardin which is VERY comfy as well as a great bargain at 15 euros for bunk and breakfast. Several small dorms hold a maximum of 20 but we are only 6.

Thus I have the luxury of a 3 bunk/6 place dorm and adjacent loo/shower for myself !! Nestled in my sleeping bag plus a toasty albergue blanket I'll sleep like a clean pampered baby. In the dawn after a self-service breakfast which includes hot drinks, toasts, juice, jam and fresh fruit refreshed and refilled I plan to set off.