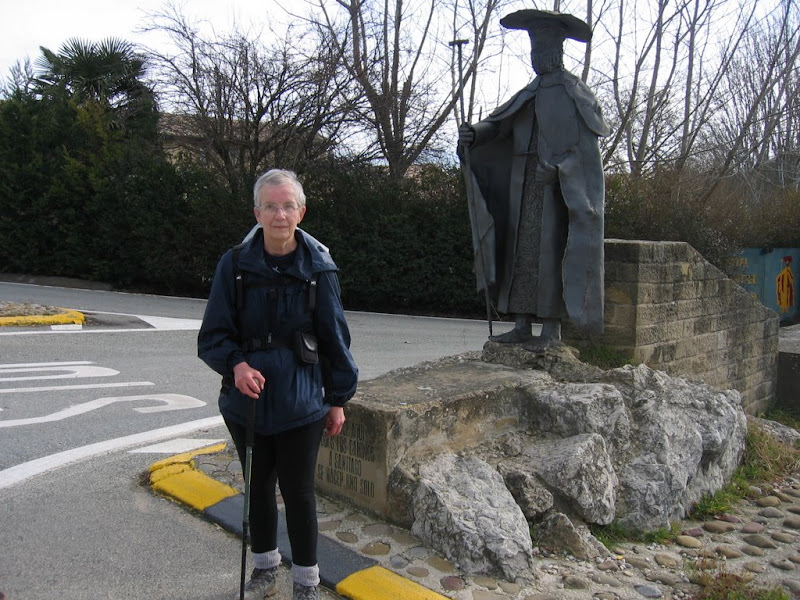 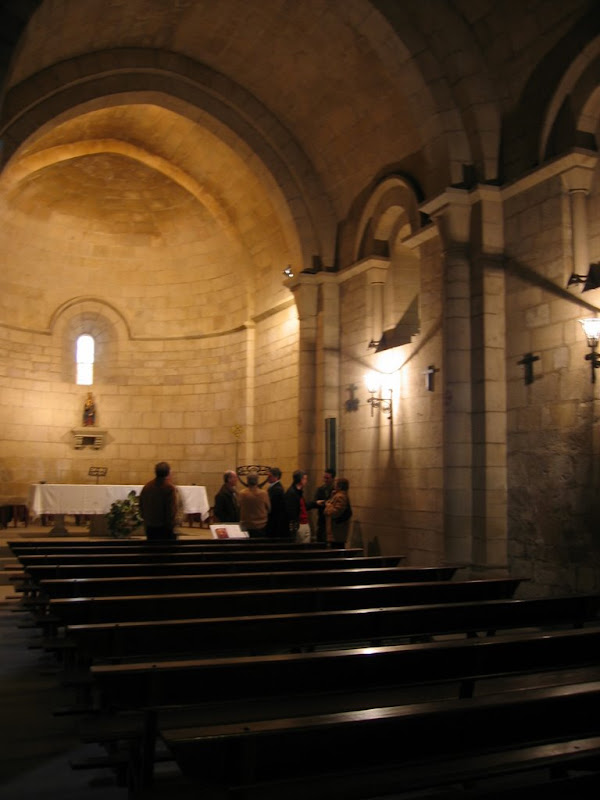 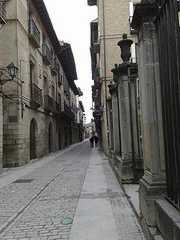 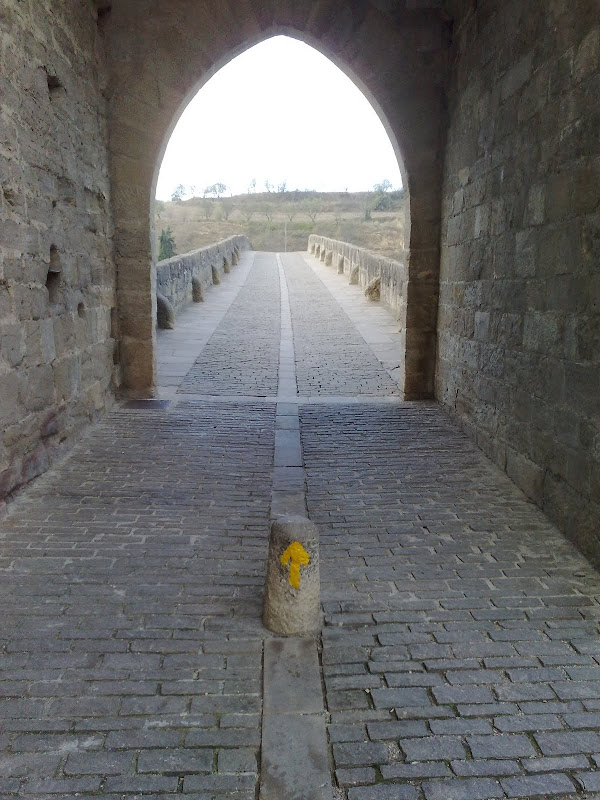 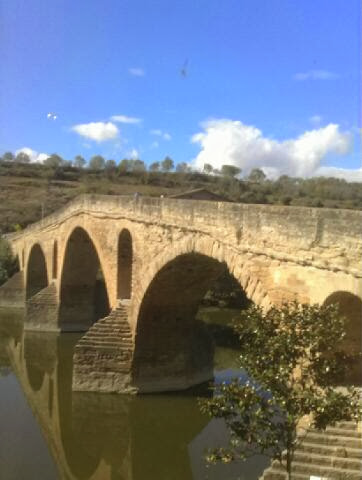 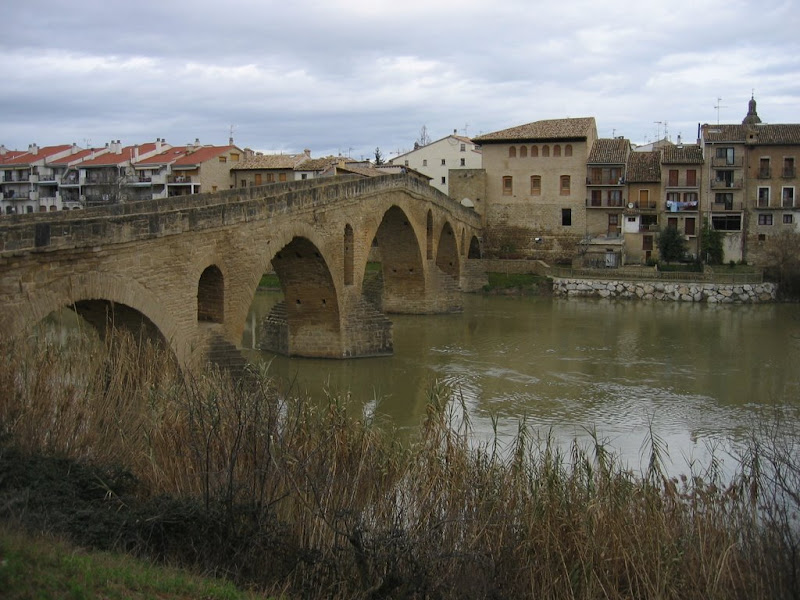 
This day almost did me in. It was a hard steep 20 k to Puente la Reina, crossing the Sierra del Perdon. However those hills pardon no one. The landscape was beige beneath gray clouds; the air turned chilly. Near the top of the pass my knees throbbed dreadfully and my nose bled. Using lots of tissues I rested on the side of the trail with my eyes closed. Perhaps I fell asleep. Suddenly I felt a tap on my shoulder; “Are you all right?” asked a very British voice. I opened my eyes and saw a young man with long hair, wearing a gray kimono, black obi sash and wooden clogs leaning over me! Was this a vision? Was I hallucinating? I answered that I was ok. He went on and soon I did also.

At the top were many giant windmills whirling to produce electricity. Nearby was a huge, handsome contemporary sculpture in rusted steel silhouetting the cut out shapes of pilgrims and their packs. Unfortunately I was too exhausted to appreciate the view. Going down was pure hell across steep slopes of tiny stones.

Close to town I met an extremely energetic American woman out for Sunday walk, but by the time I hobbled into Puente la Reina I could barely move.

At the entrance to the town is a life size statue of a pilgrim with wide hat, cape, staff and shell. He marks the junction of the Somport and St Jean Pied de Port routes. From hereon west there is only one Camino. I stopped for the night at the refuge of the Padres Reparadores. Here I met again and queried the kimono-clad hiker. He wears it because he “likes it” and walks the trail continually because he “can’t go home”. To each his own.

During the night my knees ached so much that I decided to spend an extra day in Puente la Reina. Since pilgrims can only spend one night at each albergue, come morning I dragged myself across the famous Romanesque bridge after which the town is named, checked into a new private refuge and was back asleep by 9 am! Bliss. In the afternoon I laughed reading actress Shirley MacClaine’s account of her trek found in the common room and practiced walking while leaning heavily on my stick. Unwilling to be grounded at the end of only the first week and unable to imagine mounting up into a train to return to Paris, I gritted my teeth determined to persevere.


Starting early I walked slightly south to watch dawn break at the magnificent church of Eunate. This early Romanesque octagonal space surrounded by an arcaded cloister is truly timeless. Standing in solitary splendor in the midst of fields its shape links it to medieval buildings of the Knights Templer whose prototype was the Holy Sepulcher in Jerusalem. An eight-part roof covers the mystical interior lit by a few small windows; I sat inside for a long time in awe and thanksgiving.

Pensively I walked back through Obanos and on to Puente la Reina. Passing the contemporary pilgrim sculpture where all the routes join into one Camino I crossed the famous medieval bridge and stopped at a private albergue on the west of town.


This has been a nice easy day of repose. Nikola and "strolled" to Puente la Reina in the Sunday morning sunshine. We attended mass at the historic Church of the Crucifix and wandered about town. It is good to relax in the pleasant albergue run by the Padres Reparadores. There are a few other pilgrims, all guys. Together we shared the warmth from the open fireplace and conversation.


I am now in Puente La Reina, weather is sunny but cold; there are a few more male pilgrims. Have had one ghastly bout of tourista but took some pills and now feel better. There is nothing worse that diarrhea on the trail first thing in the cold morning air.

By the way, Polo, my walking companion might be described as a contemporary Jean Valjean from Les Miserables. He has done it all including sleeping in his car for 6 months. However, he could not be here without a shepherd . So I am busily teaching him the ropes, and history.


I quickly walked the few kilometers to Puente la Reina and settled into the albergue run by the Padres Reparadores. It is next to the Romanesque Church of the Crucifix. Pilgrims have been welcomed here for centuries. Four Spanish guys arrived. One had been walking since November. He had followed the Via del Plata from Seville to Santiago and now was walking the Camino in reverse. The others were going my way towards the west.