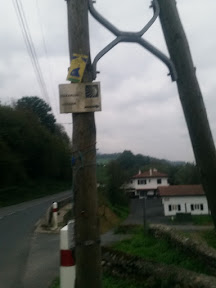 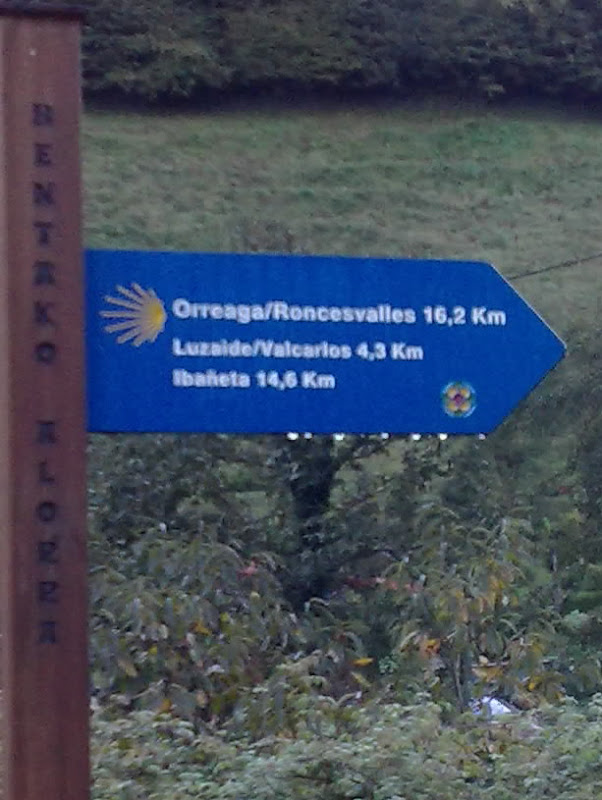 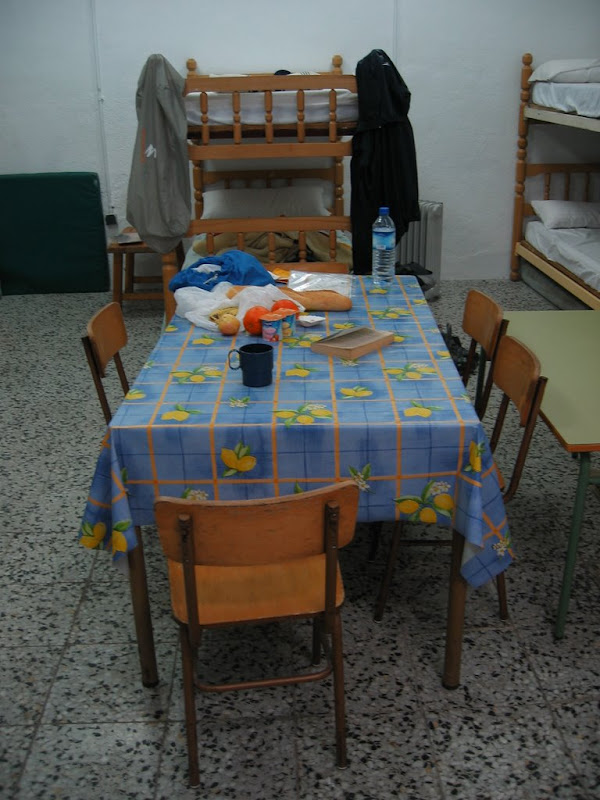 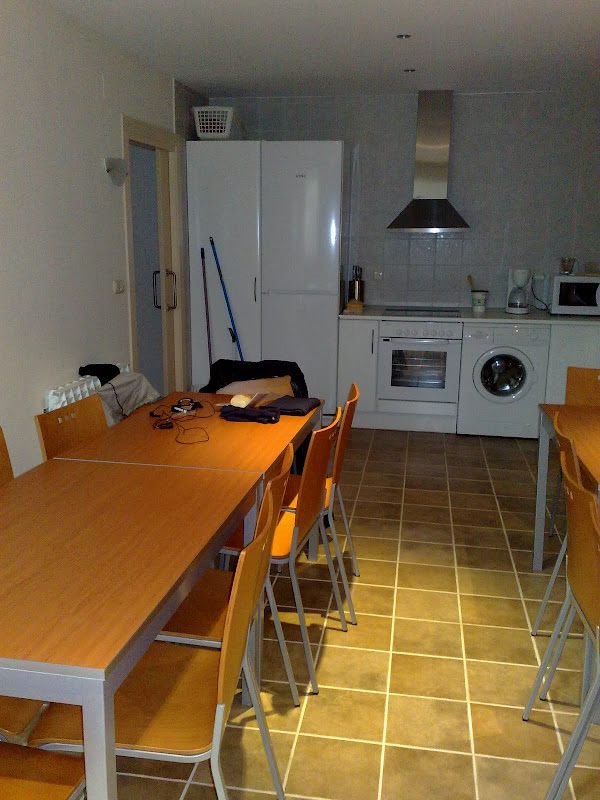 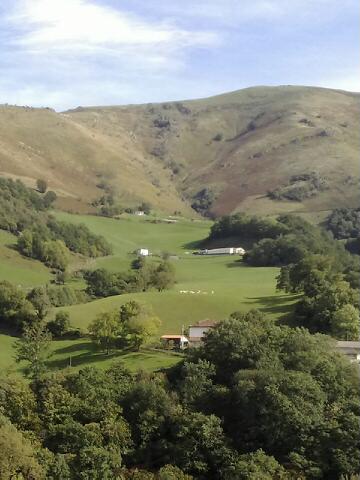 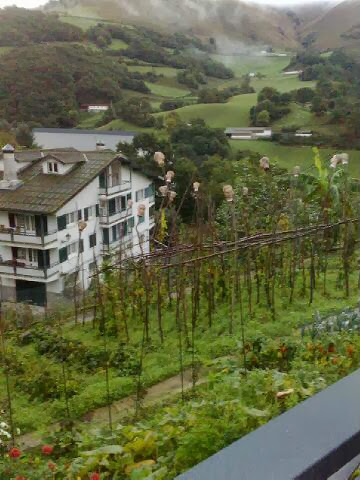 
The Camino is well marked with yellow arrows and stylized shells. Spotting the first shell marker my excitement was intense as I began to walk westward into the woods towards Valcarlos, Spain, through morning fog.

Several tiring hours, one false turn and 10 k later I arrived at Valcarlos. The town’s name means Charles’ valley after Charlemagne. It is said to be the place where during the 8th century he and his army rested following their nearby defeat. Although the Amis had mentioned that Valcarlos had an albergue I saw no sign! I asked in French at the drugstore. The druggist took me to the mayor’s office where they handed me a key. Unmarked and between two public lavatories at the back of the municipal playground, the space was small and clean. Mo and I were alone. Next morning when I tried to pay the mayor’s secretary said it was a ‘donativo’; one donated what one wished. Many other places along the Camino would use the same system.


The Italians and I set off together in a chilly dawn. Our trail to the Spanish border crossed farmland. At Valcarlos where the albergue is run by the town I stopped while the Italians continued on. I got the key, paid my donativo or contribution and took a welcome hot shower. After a hearty late Spanish lunch in a near-by restaurant I called Bill to wish him well on his journey to the states and spent the afternoon reading alone. Late in the day an older French bicyclist arrived. A retired farmer, he was so surprised to find an American woman who lived in France walking on the Camino that he cell-phoned his wife with the news! Discussing our philosophies and dreams he and I talked for a long time during the evening over several hot cups of tea.


During an early breakfast with Mme Jeanine and two young Spanish men who had arrived in the night, Gendarmes came to warn us not to cross the mountain by path. Conditions were too dangerous. Instead we should follow the lanes. Just after dawn I set off alone walking in a heavy mist. After crossing the old French/Spanish border by noon I reached Valcarlos. Here I stopped at the tiny municipal albergue. Unadvertised and without any sign you must ask for the key in the Mayor's office next to the drugstore. There was only a tiny space heater but plenty of hot water for a welcome shower. Drinking many cups of tea I spent hours reading the same study of English landscape history that I had begun during an earlier Camino! The book was in the same spot as before. Again I was the only pilgrim. Snuggling in my sleeping bag I went to sleep early in order to keep warm.


These guys with whom I am walking are not very trail wise so I have become "mom" showing the ropes and how to find places on the trail. Last night we stayed in the little albergue in Valcarlos situated between the public lavatories. All was fine but no hot plate so I made tomato soup for us all with my heating coil.


After an early breakfast this morning with Mme Jeanine I set off in the rain. It felt great to be walking again!

Although it had been cold last night I felt snug by folding a blanket in half and placing my sleeping bag on top of one half and the other half on top of it. It made cozy 'sandwich' for sleeping.

Today I walked about 14k to Valcarlos. This is a good stopping place before tomorrow's climb to Roncevalles. It rained all day and I was soaked! However efficient electric heating and a great hot shower made all the differance. Now it's toasty. This is a brand new municipal albergue and guite differant from the old one where I stayed on earlier Caminos. It is a bargain at 10 euros. However you still access it via the town hall so that you must arrive during business hours.


Last night I stayed at the very comfortable municipal albergue in Valcarlos. New and well designed it is great. I was the only pilgrim and slept for 12 hours!

Valcarlos, a Spanish village close to the border and within the Pyrenees, is named after a legendary battle. When Charlemagne (Carlos) fought the Moors and lost he retreated to a valley near here. Hopefully I will NOT need to retreat! On to Roncevalles.


Now I am back once again amidst the Pyrenees mountains! Sunday night's train from Paris to Bayonne took 12 hours. Since I had booked online 2 months in advance and am well over 60 the cost was only 50 euros to travel 1000 k while asleep in a first class couchette. Luxury was none existent, but the price was a great bargain! From Bayonne a small local train took me down to Saint-Jean-Pied-de-Port. Last night the bustling coed dorm in the municipal albergue housed French, Flemish, German and Italians plus me.

One Italian woman and I shared our thoughts on kit, backpacks, strength, and, of course, pasta. We decided to start off walking through the mountains together; thus today we crossed the old border and arrived in a gentle rain at Valcarlos, Spain.