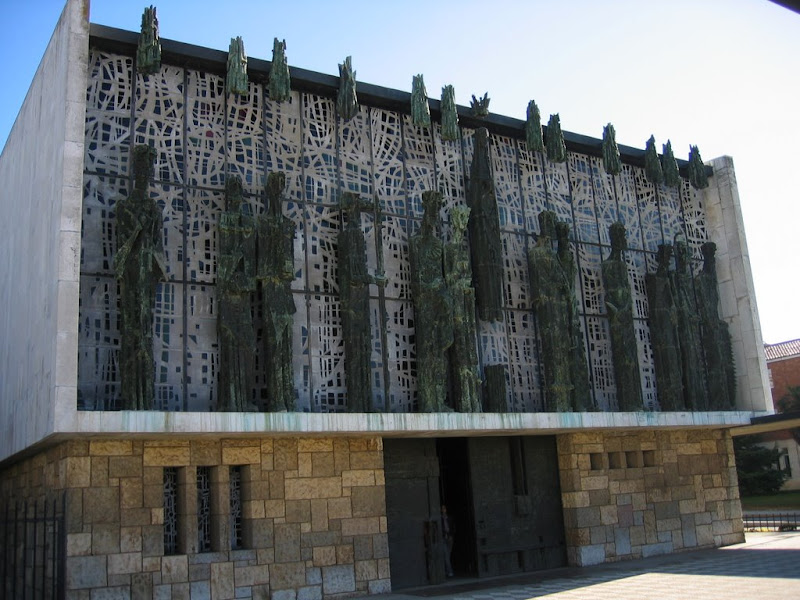 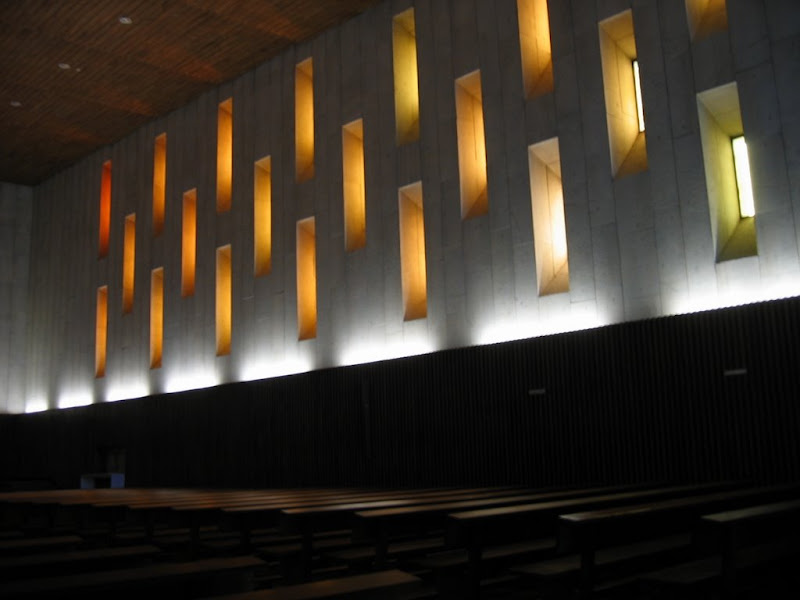 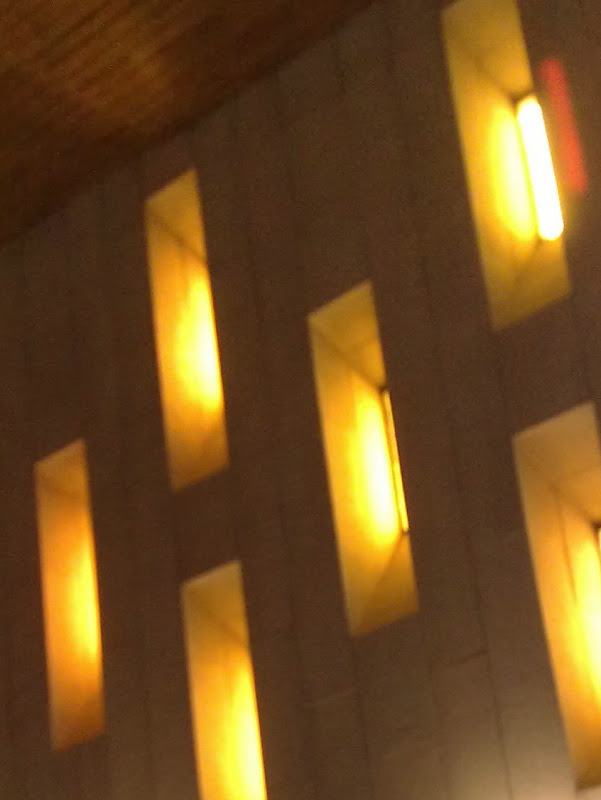 
Early next morning Mirta and I crossed Leon by following the bronze shells set in the sidewalk to mark the Camino. They were not so easy to find since they lay beneath our feet. On the western side of the city is the magnificent Monastery of San Marcos. Dating from the 16th century it is sumptuous with Santiago Matamoros over the doorway and a multitude of shells carved on the façade. Originally a pilgrims’ hospice today it is a luxury national hotel or parador. Sitting on a bench facing it is a wonderful contemporary sculpture representing St James as a tired pilgrim!

Seven k out of the city is the village La Virgen del Camino. The town is named for a famous 15th century figure of the Virgin holding the dead body of Christ. Today the figure is in a splendid contemporary church designed in the 1960s by a Dominican monk. Basically a glass box, giant stylized metal sculptures of the Apostles cover the west façade. It, too, is a gem. After a further 14 k over a barren plain, but under glorious sunshine and a deep blue sky, Mirta and I arrived at the municipal albergue in Villadangos del Páramo. It had been a tiring day.


Breakfast before leaving Leon was delicious thick hot chocolate and thin strips of crullers, local specialties. At the handsome new church in Virgen del Camino the contemporary stained glass was splendid. Afterwards it was a long slog of 21 k in sunshine to the municipal albergue at Villadangos del Páramo. L and A were the only other pilgrims. After showers and a siesta we four had a jolly dinner within the caves of a nearby wine bodega.


Today I felt fine. After quickly revisiting the Leon cathedral this morning Polo and I walked about 21 km to Villadangos del Páramo. The albergue was locked but I went to the local restaurant and got someone to get the key for me. We are alone here without heat but with a free internet. It is fine but freezing. Each of us made a private tent to sleep using using all the blankets available. Later dinner will be in the local restaurant. Since it is cold I am debating about the shower. Tomorrow it is on through Hospital d'Orbigo and eventually the real mountains.


I left Leon in milky sunshine and started toward the distant snow-capped mountains wondering as I walked where exactly the Camino would cross and my route would lie for the next few days.

At the town of Virgen del Camino I revisted the splendid contemporary church built for the Dominicans late last century by Francisco Coello a follower of the Brutalist style of Le Corbusier. Located in the midst of chaotic suburb it is a superbly maintained architectural gem as well as a haven of peace. Perfection.

As I continued it actually got hot! Cold Coke instead of my usual hot tea tasted great. By Spanish lunchtime I had covered 22k and was dripping with sweat. At Villadangos del Páramo I staggered into a truck stop near the albergue. What a way to make an impact! The place was packed; about 80 very macho men and I enjoyed the daily special. They all seemed curious about what I chose for dessert!

Now at the albergue which is as FRIGID as last year there are three other pilgrims; a Spanish girl who has only just begun and a French man with a teenage boy. The man has volunteered to walk with delinquent youth to try and redirect them towards a better life style. He and the boy have been walking for 2 months. Starting in Seville they followed the Via de Plata north to Santiago and now are returning to St Jean Pied de Port by walking the Camino 'in reverse'. Their journey of potential rehabilitation will end in another month. ...May it be a success!


Dawn broke as I left Leon; then the sky was clear and the wind only brisk. However, by day's end the wind was brutal and rain teemed. Thus, it was a long slog to the municipal albergue at Villadangos del Páramo.

Eventually four other pilgrims arrived to share the unheated space.One was a young Quebeçois man who had many foot problems. The others were a French couple traveling on bikes plus their two year old son who clad in a snowsuit rode in a enclosed little wagon pulled by his biking Daddy! Having been issued his own Credential, just like a grown-up, the little boy, too, was a bona fide pilgrim. His family had been traveling by bike throughout northern Europe including the wilds of Iceland for over one year and were vaguely headed towards north Africa after Santiago. It was fun to hear of their adventures and share their dreams.

Nevertheless we all went to our bunks quite early in order to get warm or at least warmer! Luckily there were plenty of blankets available. By folding one in half and inserting my sleeping bag between the halves all was quite toasty. Wearing my 'evening dress' of socks, fleece pants, technical undershirt, and long-sleeved winter undershirt plus my woolly hat I was snug enough. However, I did dream enviously about that little boy's cozy snowsuit!