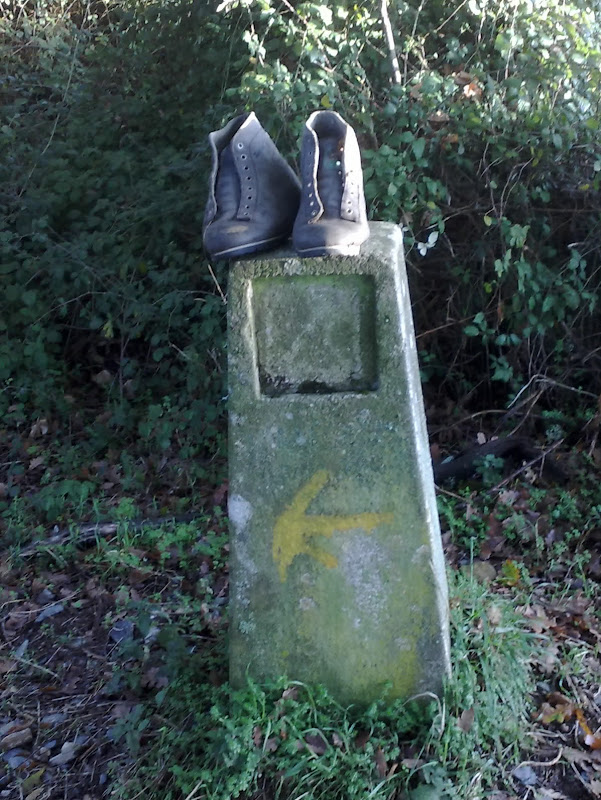 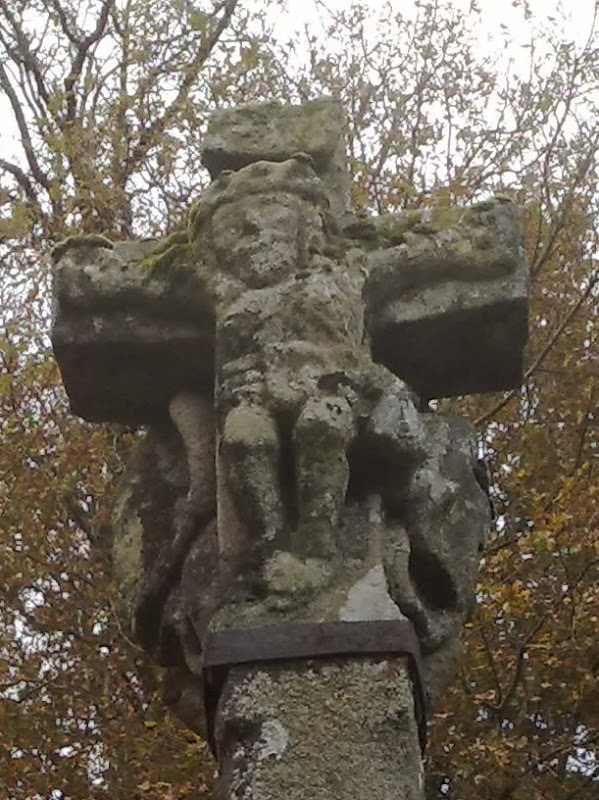 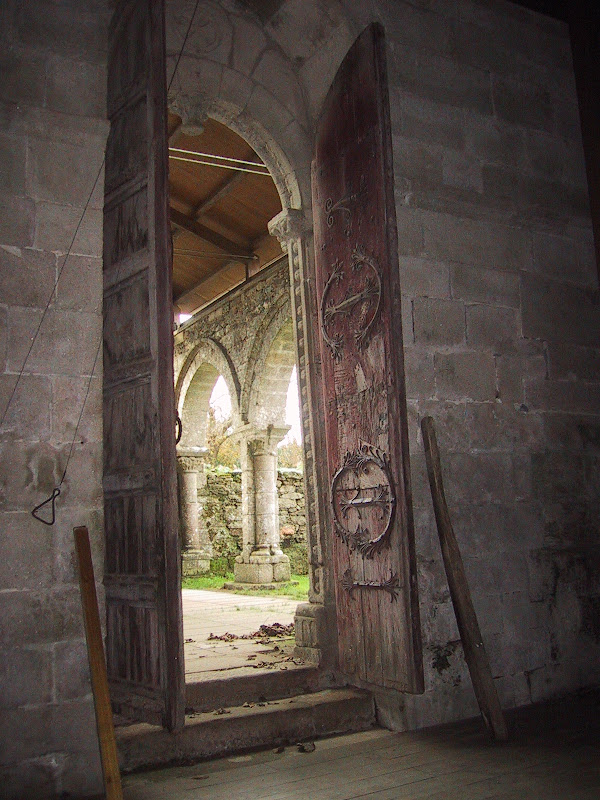 
Suddenly in a hurry I began to aim further and walk faster beneath a cobalt blue sky across the attractive undulating countryside thick with low walls, oak, pine and gorse. From time to time horreos were visible; these stone corn-cribs were raised off the ground on high plinths in the farmyards.

Meeting again by chance two Czech young women who had been in the Sahagun albergue was a happy coincidence. Together we visited the 12th century church of El Salvador in Vilar de Donas, tucked away off the Camino. Presently undergoing restoration, it had been the official burial place of the Chevaliers de Santiago. The handsome main doorway had a splayed arch with geometric and vegetative carvings. On the interior were delicate 15th century frescos and several tombs topped with recumbent effigies of the knights. It was, indeed, a very special place. By late afternoon the weather turned cold and gray. We continued to Palas de Rei. My friends stopped at the albergue and I in a small hotel; by the end of the day another 24 k. had been covered.


A Spanish woman and I walked 24 k through heavy rain and very strong winds. Hiking was frightening as the branches snapped and the rain teemed; during one blast the rain cover on my knapsack blew away! We never did find it. Luckily my poncho could cover both the knapsack and me. In Palas de Rei the municipal albergue was crowded with soaking wet pilgrims and some very wet clothing as well as sleeping bags. Glad that heavy-duty plastic bags protected everything within my knapsack, I hated to imagine the discomfort of a wet sleeping bag! Several pilgrims ate together in a tiny restaurant nearby. Simple hot food tasted wonderful after the storm.


Did 24k down to Palas de Rei. Much of the path paralleled the highway. The vegetation has changed; now there is Spanish broom and heather. Also passed many 'horreos' or raised corn-cribs typical of Galicia. Went to the municipal albergue in the center of town, but I didn't stay. It was just too crowded with burping men! Now I am next door in the luxury of a tiny private room over a bar. Starting to plan the rest of my journey.


Peter, Polo and I are in a very nice new albergue recently opened on the edge of sports ground entering Palas del Rei. There was also a good restaurant nearby for our pilgrim dinner.


After another beautiful hot walk through pine forests and tiny villages tonight I am outside Palas de Rei in a sports complex. The is a new albergue where I also stayed last year. It is quite crowded with Spanish pilgrims dashing to Santiago. Here one gets a thin paper cover for the mattress, but it doesn't really fit and slides about. However, the nearby restaurant, La Cabana, has excellent food. Now to sleep.


Going to Palas de Rei today was happier since the sun finally shone again. More little lanes, many puddles, much mud, and several new "pilgrims" who while only walking the final 100km, send their packs by taxi and, hence, bounce quickly past the rest of us trudging along.

My fellow long haulers are now collectively rather shabby. We all need haircuts, the guys need to shave and everyone's clothes need to be boiled clean! Several are nervous about reaching Santiago within the next few days and wonder how will it be to be off the Camino and back in ordinary life. Personally I always have found re-entry difficult; it is depressing to stop following the yellow arrows.