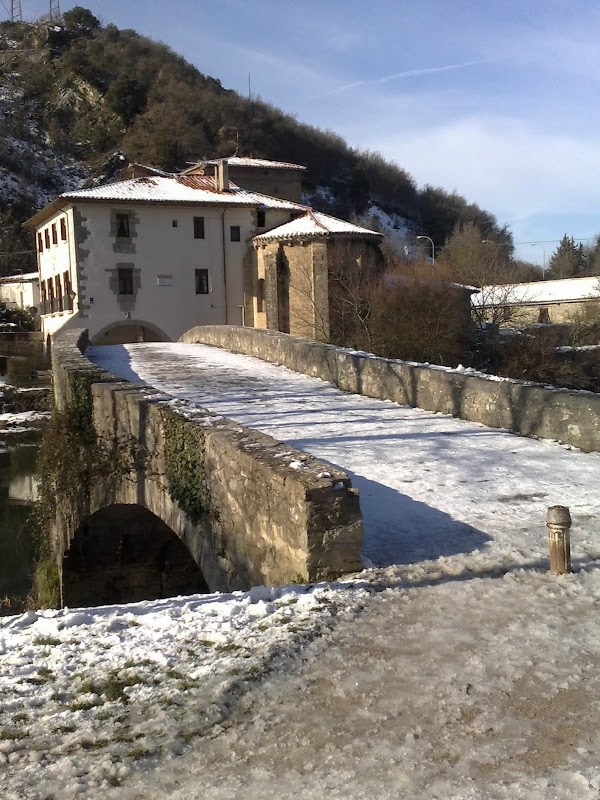 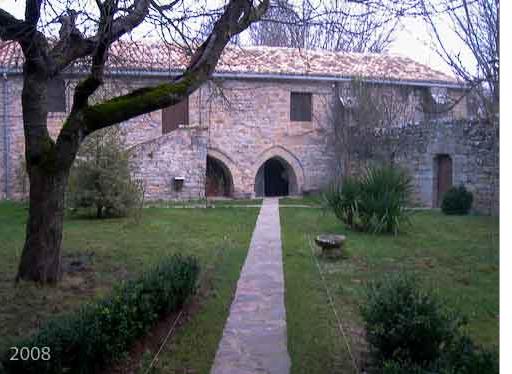 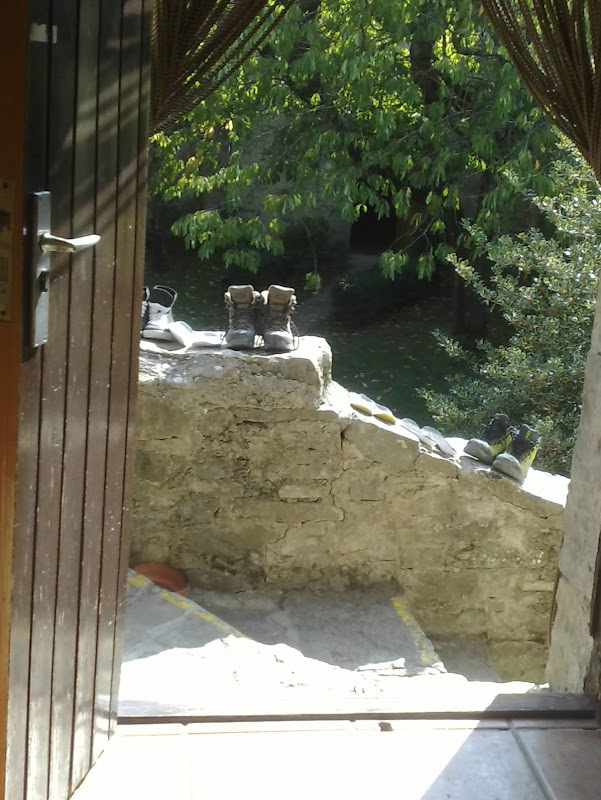 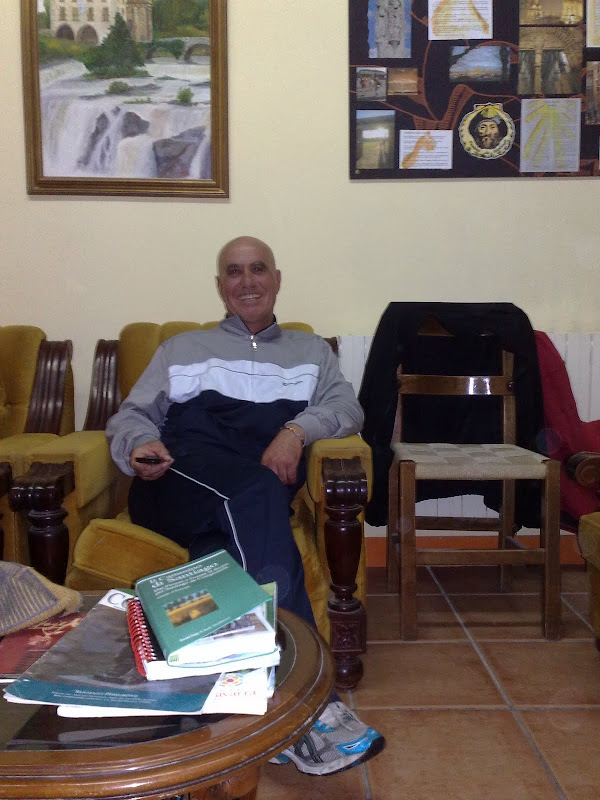 
It was a hot day, but walking was easier. Crisscrossing the river Arga on medieval bridges it was surprising to see Coke machines often installed by the bridges to service contemporary pilgrims! After 13 k came Arre and the small monastery La Trinidad. Scenically located on riverbank, it also had been an important pilgrim refuge throughout the ages. Accommodations were in a refitted barn within a tiny simple monastery garden. Sitting outside writing my diary all seemed timeless. Happily, I was starting to feel at ease and at one with the trail. Fellow pilgrims included a group of very athletic Spanish men; suffering from huge blisters on their feet, they were in agony. For dinner nearby I joined two Frenchmen taking time out to walk.


Yesterday, Sunday, Mario went on while Polo and I continued slowly to the most pleasant monastery at Trinidad de Arre where I had stayed on my first Camino in 2004. We were the only pilgrims.


After spending a second full day in Zubiri I decided to leave this morning no matter what the weather. In fog and light rain I walked mainly on the road due to all the water and mud accumulated along the Camino. Other than one mad dash into the very wet grass for a 'loo' all was fine. The famous Arga River where Hemingway liked to fish was churning with high water.
Earlier I had worried about one area on today's route remembered from past Caminos. It mounts steeply up and then clings to a cliff for a stretch before leveling out. It could be dangerous in the rain! Even a search on the Net for alternative hiking routes into Trinidad was unsuccessful. Nervous I walked closer. Suddenly in the distance approaching me appeared a guy holding an umbrella.

At first I was leery since it was hardly weather for strolling! We greeted each other and chatted mixing Spanish, French and English. Best of all he knew another level path which would join that to Trinidad! We walked safely on together....Such chance encounters make up the Camino's serendipity.

At the very moment that I wrote the word 'serendipity' in my blog and sent it off another pilgrim entered the albergue. Happily speaking Italian he was welcomed at the door by the two Spanish pilgrims. I was writing in the common room. The Italian entered, started to say 'buona sera' and then enthusiastically shouted 'Margaret'! Imagine my delight upon realizing that he was Mario whom I had last seen at Burguete in 2008 during Camino 4!! Another fortuitous chance encounter indeed.

We and a French pilgrim, Polo, had met on the little train going to St Jean Pied de Port. As Mario and I recollected those 'old times' we tentatively promised to meet again next year in 2010 on the Camino. May our lives be such that we míght.


Tonight the monastery at Trinidad de Arre is quite a story. It is freezing! The monk hospitalero who met me a the door was wearing a quilted ski parka and knitted cap with ear flaps. He resembled a wintery Michelin man. I have a tiny cell behind the altar with blankets but NO heat. Arriving here was difficult for the path was slick with ice. Hopefully I will be able to sleep since the monks have just brought me a tiny heater. .....However now five minutes after the monk plugged in the heater all the electricity has blown! It is FRIGID and BLACK tonight!!


Today the French planned to walk on to Pamplona while I stopped once again at Trinidad de Arre, another monastery which has received pilgrims for centuries. The present small albergue is set within an overgrown walled garden on the riverbank. Tonight the twelve other pilgrims form two groups; six South Koreans with piles of equipment and six Irish some of whom have special needs. At the moment all are trying to simultaneously use the kitchen. Bedlam!


Yesterday tramping through the forest down to Zubiri was dark, sodden and rather eerie due to continual heavy rain. I stayed once again in the pleasant and quite up-market private albergue, El Palo de Avellano, located next to the church. Several farm buildings have been refashioned into slick multilevel dorms and common spaces including a lounge with billiard table as well as a dining room with murals. Much is automatically lit by motion sensitive lights. Most fellow guests were of the 'been there, done that' ilk. Hence the night's ambiance was sleekly correct, but highly impersonal.

Tonight is vastly different. More rain made today's camino west towards Pamplona into a muddy mess; the Arga river was churning whirlpools. Drenched and cold I stopped as usual at the monastery in Trinidad de Arre. Their main albergue is under renovation but three tiny cell-like spaces above the church are presently available for off-season pilgrims. Luckily I got one; four Spanish men occupy the others. We all share the single loo and shower. The men keep asking if I am comfy. Two kind monks brought all of us hangers for out dripping ponchos and extra blankets "just in case". True the electricity is not state of the art, but we pilgrims all have tiny headlights. ... Thus for me tonight's shared human warmth is the true camino ambiance!


With exhausted pleasure I crossed the ancient stone foot bridge and FINALLY reach the albergue at Trinidad de Arre! The Marist father who greeted me was, as always, gracious and offered a most refreshing glass of cold water as he stamped the Credencìal. After showering I sat alone for much of the afternoon drinking tea in their simple timeless monastery garden. While wondering how it might have appeared during the past I watched the shadows lengthen and the first stars appear ever thankful to be at peace in such a pleasant spot.

Posted by Margaret Meredith at 8:40 PM