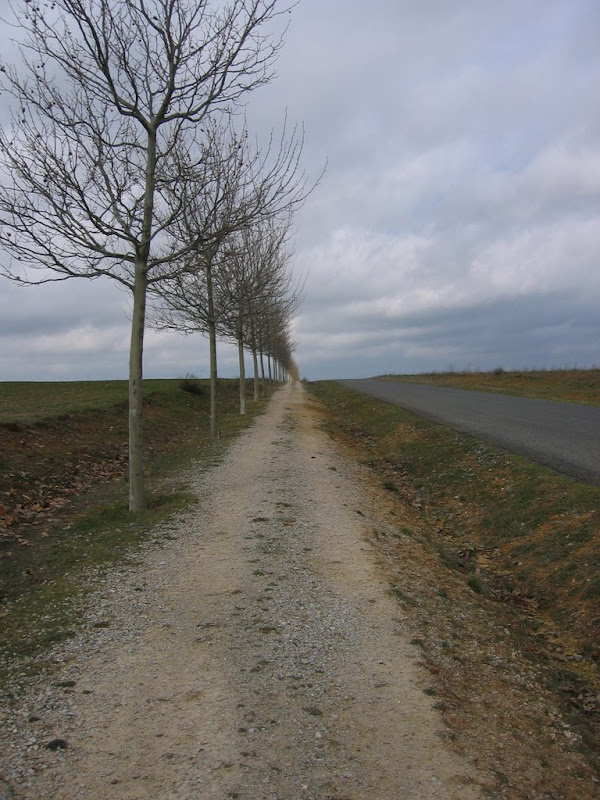 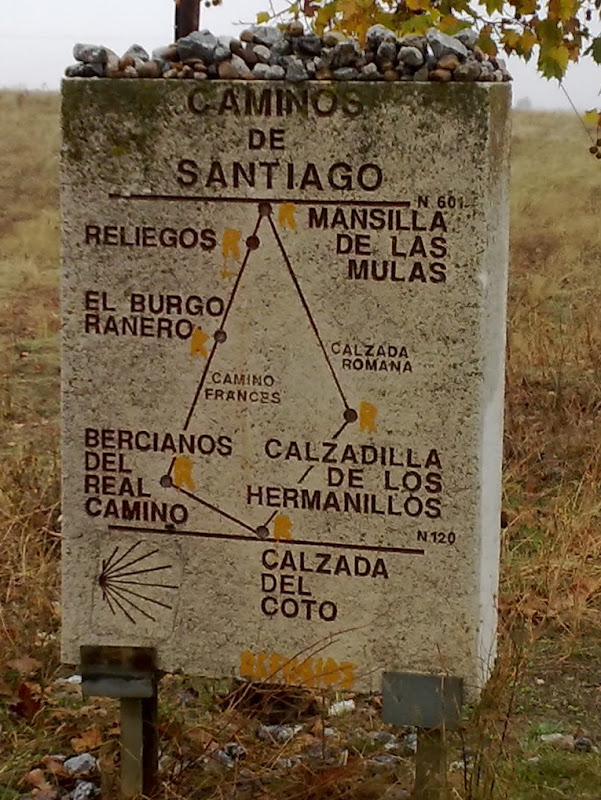 
The 18 k to El Burgo Ranero were cold, windy, wet and rather boring. At least it was flat along the new, wide path built by the regional government. One contemporary monument along the route commemorates the life of Millan Brovo Lozano, the priest and scholar whose guidebook, A Practical Guide for Pilgrims, I used. Meeting again the young Spanish woman who had stayed at Villamayor de Monjardin was a pleasant surprise; now she was the housemother in the municipal albergue. Most of the buildings in the town were adobe.


Next day we walked 18 k across a bleak plain to El Burgo Ranero. The weather was so mild that I removed one layer! Had spring come at last? Near La Graneras stood a monument in memory of father Millan Bravo Lozano. His invaluable guidebook, A Practical Guide for Pilgrims, had been useful for planning my trips. Two men were at the albergue. One, L, was also from Brazil and the other was the Quebecois, A. As if on cue he asked if B had been passed recently! After a welcome hot shower we all ate in the local truck stop.


Happily the rest of last night was uneventful! After we shared breakfast the bikers and I shook hands and parted. I walked 18 k to El Burgo Ranero which has many adobe structures. For a bit the weather was so warm that I removed my jacket. Bugs flew about and some dandelions were in bloom! Has spring arrived? The municipal albergue is crowded with a noisy group of French adults who constantly and loudly tell each other how uncomfortable they feel! Twas ever thus.


We four continued to El Burgo Ranero. The normal albergue was closed but I found a private one for us all to stay in. If it were up to the guys we would still be standing on the street. None of them seem to be able to ask a question or interact with the Spanish. I just barge right in.

By midnight the private albergue was almost full with a group of young Aussies whose feet stank unfortunately. Also the so-called door to the loo and showers was wooden beads which made a tremendous noise when anyone passed in the night.


The albergue here in El Burgo Ranero is closed for repairs so I am in a hostal across the way. All these unavailable albergues 'under repair' is denting my budget, since any alternative to pilgrim lodging is usually far more expensive!

Walked 18 k this morning in sunshine with a constant matinal companion - my shadow. Always there slightly to my right since the morning sun is behind me, it is an uncomplaining, intimate presence. ... Shades of Peter Pan! However, it does seems to slouch a bit!

Although I do get weary I love walking! Hearing the continual crunch of one's footsteps is very reassuring. You know that you can do it and can continue to do it as long as you have the energy. Ultreia!


Since Fromista for the past few days I have been walking casually with a mix of men. Whether Belgian, Spanish or German all are generally in their mid-thirties, long distance walkers and very kind and protective of me. We often stop at the same bar for a coffee and sleep in the same co-ed dorm but in no sense do we move as a single force! Each of us creates his own pattern as he moves along.

And thus the Camino is composed of all pilgrims' patterns; the multitude of these individual units together form a whole. Our way has nothing to do with sending backpacks ahead, taking taxis or buses during rough patches, staying in heated hotel rooms or complaining. At the moment all of us are relieved and thankful to be out of the incessant rain and mud. We try to take it as it comes enjoying the good and bearing the bad. After all this is life. Thankful at the end of each day for simple shelter, a bed (preferably a bottom bunk for me), working toilet, hot shower, something to eat and if possible good companionship. Such is the pattern of these days moving westward towards Leon. Carpe diem!

When I trudged on from Sahagun to El Burgo Ranero it was COLD, bleak and solitary. During 5 hours only a handful of pilgrims passed by but all were battling the incessant wind and rain. With great relief I finally arrived at the simple adobe albergue and met the friendly hospitalera named Alicia "like Alice in Wonderland!" as she said.

Wonderland indeed! Alice who had just arrived herself would be resident hospitalera for the next two weeks but already had an open fire warming the downstairs common room (there was no other heat) and her lunch was cooking in the kitchen. One other soaked cold pilgrim, Carlos from Madrid, came in. Since it was Sunday and both bars and the village shop apparently closed Alice immediately set the table for three and graciously invited us both to share her meal. Thus the delicious HOT rice, vegs and salad was stretched with his cheese and my biscuits and bananas. In the spirit of Wonderland we all drank several steaming mugs of HOT sugared tea. Alice enjoyed recounting her many camino memories while serving as hospitalera. I sensed that wherever she might be it would quickly be her 'home'; across the years the camino had become her way of life.