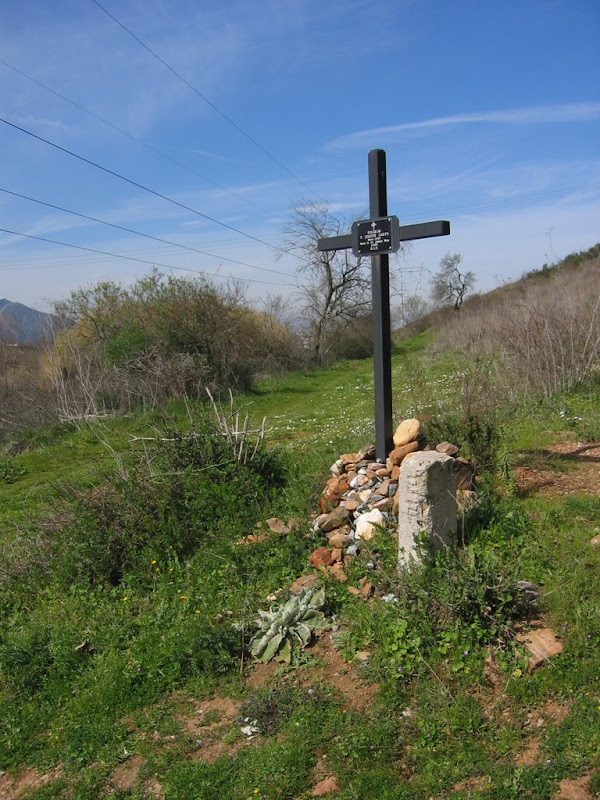 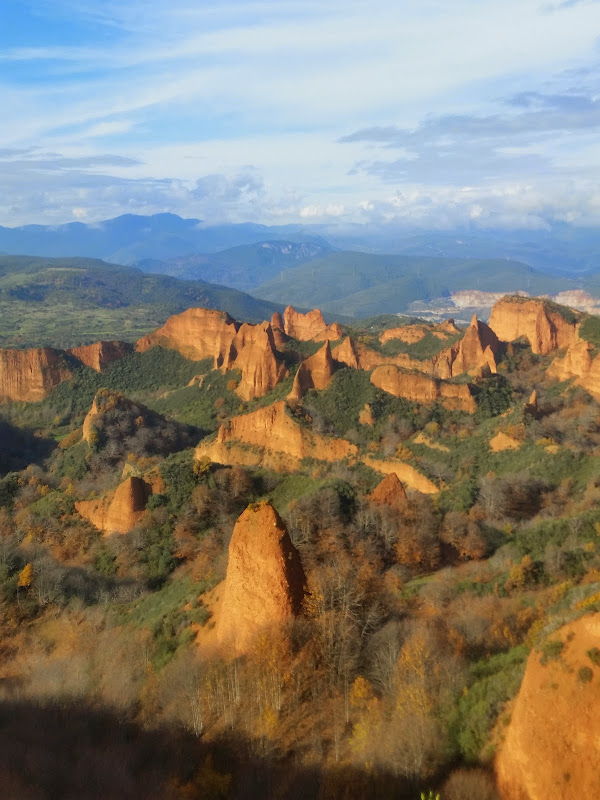 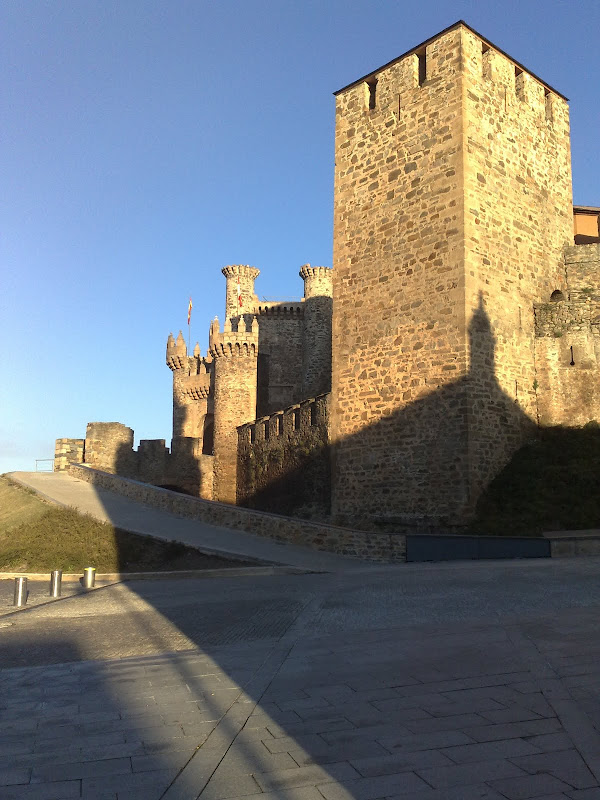 
On the way out the next morning there was a memorial to a German pilgrim killed while cycling. Now the Camino started descending steeply. After 7 k we finally found a place for breakfast in Molinaseca, another pretty town on the Meruelo river. It was most welcome; hiking is difficult on an empty stomach!

After a further 8 k we arrived at Ponferrada. In the 12th century the Knights Templar had built the magnificent castle with crenellated towers and turrets overlooking the river Sil. Somehow we had lost the trail and it was not easy to find the municipal albergue. An itinerant musician, Mirta and I ate a late lunch in a nearby workers club. Although recommended by the housefather, the atmosphere was rather gloomy. Lots of retired men (probably younger than I) were sitting about playing cards in the smoke filled rooms. Feeling very tired I went to bed early.


In predawn blackness the restaurant chef knocked on the dorm door and said that breakfast was ready! On the way out of the village I pasted a memorial to a German pilgrim killed while cycling.

The trail was steep so I walked down the mountain on the road. After 15 k upon arrival at the only albergue in Ponferrada, I asked about the air-express package from Brazil. No package had arrived, nor had any of the three hospitaleros who lived on site ever spoken by telephone with S! “Nada”; there was nothing. Chagrined I wandered about town.

Since then the events of those days have been mulled repeatedly. In retrospect I do not want to believe that I had been milked for money in a real snow job! Hopefully all was not just a ruse and I had not been duped. At least what I did was done in the Camino spirit of trust and mutual assistance. I still firmly believe one must act towards others “as ye would that men should do to you”. Let it be.


Walked 15 k down from the mountains in glorious sunshine. Since much of the descending trail is very steep and crosses rock, I followed the road until Molinasecca. There during my second breakfast another older solitary pilgrim "joined" me at table. He was Polish and extremely reticent. Although he seemed to understand both French and English we had no conversation. Now I am in the large municipal albergue in Ponferrada. About 15 pilgrims are here including the Pole. Many of the others who arrived by train are just starting their Caminos. When they learned that I have been walking more than a month alone in winter they were quite impressed!


Today's long walk down to industrial Ponferrada was lovely; eventually it was hot with bright sunshine and a cobalt blue sky. Happily I removed my gloves, hat and jacket. Spring has arrived. What a difference from just 48 hours ago! On the hills almond trees were blooming as well as daffodils in suburban gardens.

Unfortunately the albergue is not so pleasant; it seems crowded with about 25 pilgrims jammed into 6 small dorms. We all use the same toilet/shower facilities. Thus the waiting lines are often very long! However, the free Internet is great.

I am always amazed by the amount of stuff that some pilgrims lug with them. First of all their backpacks are too big plus being filled with far too much. A good 'rule' to follow is to carry no more than 10 % of one's weight; I weigh 65 kilos and my pack loaded, but without food, is 6.5 kilos. (All my winter kit is listed in Camino 2/2006.)

Many winter pilgrims also wear clothing that is far too bulky. It doesn't need to be thick in order to be warm! I wear a long sleeve runner's shirt over a short sleeve technical tee shirt. My jacket is a lightweight windbreaker. All is polyester. After 5 minutes walking briskly I have always felt warm, except when in sleet. For my next Camino lightweight, truly waterproof gloves would be a BIG improvement.


This morning we seven walked down the mountains to the Ponferrada albergue through light snow, rain, fog and a bit of sun. Tomorrow we will go up again, but further west towards the last mountains. Life here in the Ponferrada albergue is not the greatest. Thirty pilgrims are crammed into seven small, hot dorms with only two working toilets! Chaos! It makes the corner bar's facility, in marble no less, seem like five star luxury.


It was 18 km down to Ponferrada with the weather warming and the sun appearing as the path descended. At the centrally located municipal albergue although the toilets and showers were coed by chance I had the "luxury" of a dorm for myself. How nice it was to spread out and not worry about disturbing anyone or vice versa while thinking of the route to come. Heard no snoring but my own!

It is always a joy for me to be in the mountains and thus the long stretch between Leon and the Galician border is one of my camino favorites. One of my dreams these past years while walking this stretch was to visit the UNESCO World Heritage site, Las Medulas, near Ponferrada.This is a unique area of Roman gold mines marked by most distinctive channels, caves and giant cones of bright orange rock. After learning that the Camino Inverno route passed these mines I rather casually decided to make the detour this year. Imagine my delight when pausing at Foncebadon for tea I met a woman pilgrim who works in Indonesia and who agreed to also make the detour! At El Acebo as dense fog rolled in we stopped at the simple Meson bar/albergue when I often stay. Worried about how to easily and safely see as much of the Medulas area as possible we were delighted to learn of the guide/taxi services of a local man who next day met us at Campo, hosted us in his 15th century hacienda and drove us far and wide throughout this almost surreal landscape. What a day and what a detour!

Posted by Margaret Meredith at 4:20 PM