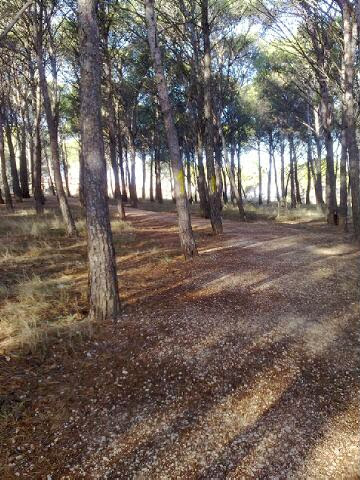 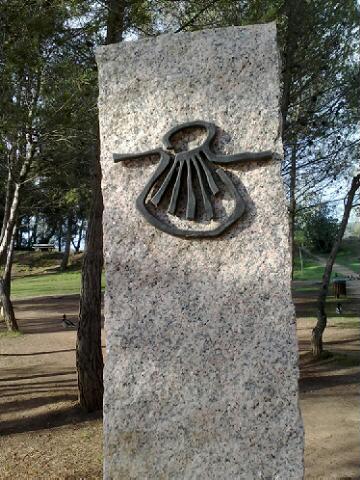 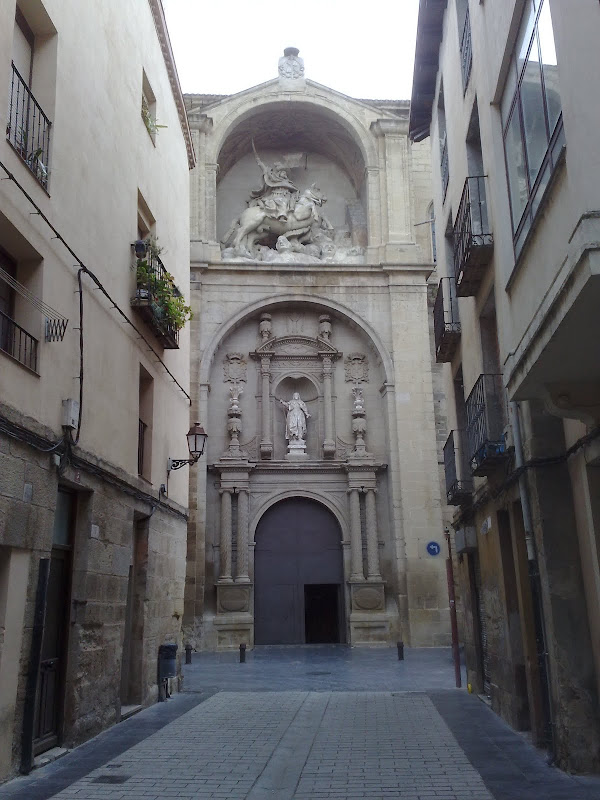 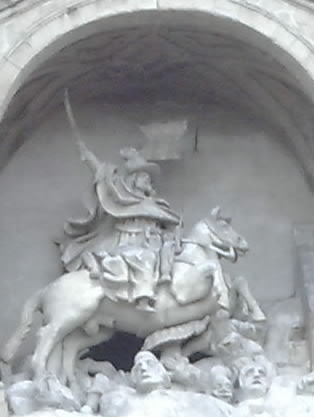 
Now the Camino entered the region of Rioja, renown for wine. After 10 k came Logroño, a prosperous city on the river Ebro. The municipal albergue was well designed. It had a pleasant exterior patio for sitting or washing clothes. Contemporary sculpture decorated the airy public spaces. Its 80 bunks were grouped in small nooks with 2 double tiers in each. It felt comfortable and not claustrophobic. Near the albergue stands the church of Santiago. The Baroque doorway depicts St James in the two different guises associated with his legend. One is as a gentle pilgrim wearing a broad brimmed hat and cape, holding a staff and shell. In this image, which is the more common, he has become his own pilgrim. The other depiction is as Matamoros or Moor slayer. As a valiant warrior he rides a spirited white horse beneath which lie slain Moors. The Matamoros is associated with a nearby battle site at Clavijo. Here in the 9th century the Spanish king while fighting the Moors saw in the sky an apparition of St James on horseback. The Spanish were victorious and, thus, began their Reconquest of Spain. Of course, in today’s ecumenical and/or politically correct world this depiction is dynamite.


I should have rested longer. Walking 9 k into the city of Logroño was difficult; neither my legs nor guts were in condition. It was almost impossible to move. At the municipal albergue I met a Corsican man who had also fallen in the storm cracking three ribs. Next day depressed and commiserating we shared a taxi to the bus station. He left for Madrid and a train home and I for Irun and the TGV to Paris. The continuation of my second Camino would have to wait….....


Niki and I did 20 k in the sunshine to Logroño. We walked along highway 111 to avoid climbing through the infamous ravine named Mataburros or Burro Killer. My feet hurt enough! Just before Logrono we crossed the regional boundary out of Navarra into Rioja. This large municipal albergue is very pleasant; handsome Camino-themed art decorates the spaces and the staff are helpful and pleasant.


We are in Logroño after a 20km walk mostly down under a hazy blue sky and golden sun. Actually took off my jacket for a while. Now I am very tired. Saw Pussy willows so spring appears to be around the corner here. However, there may be snow at Granon in a few days. The sweaty Spanish are still with us and a young Lithuanian guy has joined the team.

This nice municipal albergue has wonderful dark blue polaire (fleece) blankets. We three, Polo, the Lithuanian guy named Edmund, and I ate dinner together in a local place and were joined in the albergue by the sweaty Spanish men from the night before and a German girl who got in without a albergue pass but said that she would buy one the next day. So much for winter standards. However she was cute so the house father took pity on her.

The putside of the Logrono church has a large sculpture of Santiago Matamoros, or St James killing the Moors at the Battle of Clavio near here. I know, not very politically correct but it was a long time ago.

I have just discovered a wonderful Spanish chocolate bar for cooking that gives me great energy when I need it.


It was cold and wet walking to Logroño. The sky was dark and the land sodden with water and,of course, mud. Hence for safety until Viana I walked on the road. Just outside Logroño the Camino entered a new region, Rioja.

It is always a pleasure to stay in the Logroño albergue. The Amigos keep it immaculate and there is interesting art about. Tonight we are 5 pilgrims; 2 Canadians, 1 Polish, 1 Spanish biker and myself. Hopefully no one will snore.


Now I am in Logroño which is a bustling hub for Rioja wine similar to Epernay for Champagne. This municipal albergue used to sport handsome contemporary art with a Camino theme as well as cosy dark blue polar blankets on each bunk. All are gone now;it is clean but anonymous. How sad it is when what once provided a specific identity disappears.

One identity which still is very visible within the city is the distinctive sculpture of Santiago Matamoros above the main door of the majestic church dedicated to Saint James. Here he is depicted victorious in battle riding a great steed with heads of slain Moors beneath. In today's world such a symbolic sculpture is of course politically loaded.


Glorious sunshine, brisk air, and a cobalt sky made a great camino day. Walking into Logrono and the endless vineyards of Rioja was an easy pleasure. By tonight the municipal albergue is booming with an international crowd - an older French hospitalero, several German girls who planned to walk far south to Cadiz after Santiago to spend winter in Morocco, and a peloton of handsome, slim Brazilian guys biking to Santiago. Inside is a bit chilly, since the exterior temp is below 0 Celsius and the uninsulated albergue has bare stone walls but neither heat nor blankets. By following two simple 'tricks' for such a situation - choosing a bunk away from the cold exterior wall and, of course, using a silk or polyester liner in the sleeping bag - I hope to spend the next eight hours cozy and comfortable.


Entering Logrono all was misty and dim; since heavy rain was forecast it was hard to see the way ahead. Pooped I desperately wanted to sit and rest. Unfortunately not a rock, log or bench was in sight as I trudged along the familiar path.

Far in the distance two forms appeared which at first I erroneously assumed to be recent sculpture since I remembered none along that stretch. Furthermore since those distant figures appeared to be wearing long aprons I wondered if this was new advertising for the joys of Rioja wine.

Imagine my surprise when the figures warmly greeted me in Spanish, French and English while stating that they were members of a local Christian brotherhood which assisted pilgrims and the local poor! They graciously asked if I wished any water, coffee, or fruit. Declining their offer I asked if I might please sit down on a chair! They laughed and I sat with great relief.

Next came a Korean pilgrim with whom I had been casually walking/chatting the past few days. He, too, was tired, spotted my 'borrowed' chair and asked if he could use the other one! We four then intensely discussed how helping others is both a human and humane necessity. Before we left the Brothers asked us what passing pilgrims might most desire -- hot chocolate, cookies or cake? Both the Korean pilgrim and I replied "More seats would be great!"