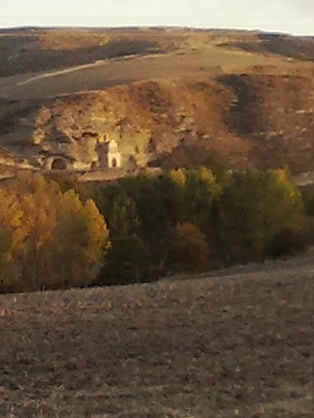 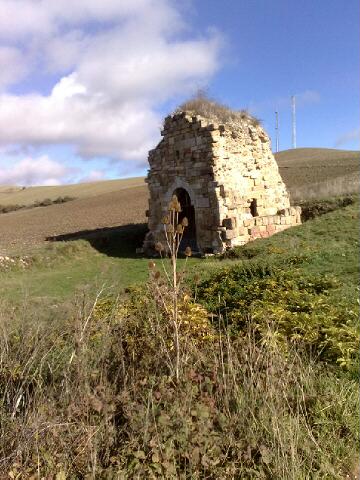 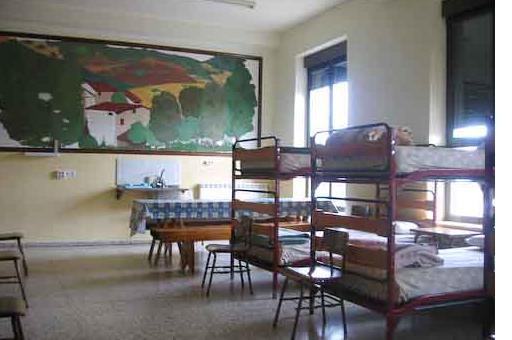 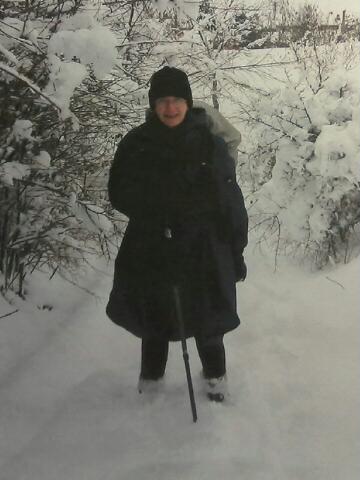 
The wind had ceased so the 12 k to Villafranca Montes de Oca across farm fields felt easier. The designation Villafranca refers to French pilgrims who settled here during the Middle Ages. As I was slowly plodding into town a mixed group of athletic, chic Spaniards without packs but prepared with umbrellas went dashing past. In comparison I felt and looked like an ancient relic.

Installed in an old school the municipal albergue was extremely basic, but crowded. At the local restaurant, a truck stop, the dining room was closed. Luckily the bar was open. After my pleas the bartender eventually produced fried eggs with mountain ham, bread and red wine. Delicious!


It started to snow in earnest. By the time I trekked 10 k to Villafranca Montes de Oca the Camino was covered with 2 or 3 inches. Walking had become dangerous. After lunch in a truck stop, I went to the municipal albergue. No one was about, but the front door and one dormitory were open. No heat in the radiators, but piles of blankets and a hot plate. Considering the alternative it was great! Mid afternoon I snuggled into my sleeping bag; outside the storm steadily intensified. As night fell the radiators started up. How lucky I was!

About 9 pm. the front door banged open followed by steps up the stairs. Resembling snow-covered yetis, two pilgrims stood at the foot of my bunk! One guy was French, the other Brazilian. We introduced ourselves and shared many cups of hot tea.

Early in the morning the Frenchman left. Outside was a winter wonderland. The snow continued to fall. Over breakfast of cereal bars and instant coffee the Brazilian, S, said he was a lawyer and recounted his story. He had come on the Camino as a religious penitent offering thanks for the recently improved health of his girlfriend who had been seriously ill. Landing in Marseilles he had been robbed. By means of the graciousness of various parish priests along the way, he had made it thus far without money or credit card. Wary, dubious and uncertain I listened. Eventually I decided to help, silently recalling that trust, the commonality of all pilgrims and the necessity for caritas are principles along the Camino.

Bundling up for the storm plastic bags over sox served as makeshift gaiters. Outside the snow reached mid-shin. No trail could be seen; only a few markers affixed to trees were apparent. Walking was treacherous. At a road crossing S and I were intercepted by the Guarda Civil in a four-wheel drive. Firmly stating that our lives were imperiled the police insisted on us returning to the albergue. Their photographer took my picture.

Returning in their skidding van was really the risk, what a roller coaster ride! Back in the albergue S cooked pasta. In a cupboard of leftovers was discovered a half full bottle of Rioja wine. No rare vintage year ever tasted better!


Today was an easy 10k but with a cold wind to Villafranca Montes de Oca. After lunch at the local truck stop I went to the municipal albergue. Located in an old school, here too the door is always open. The local hospitalero comes by each evening. Choosing a bunk next to the radiator I remembered my adventures here during last year's heavy snowstorm (see Camino 2, February 25). A German pilgrim named Wilfried has just arrived. His backpack is huge, but apparently stuffed with food! He has kindly offered to cook supper for both of us.


After Belorado Polo, the Canadians and I walked along the quiet and flat Camino towards Villafranca Montes de Oca. The Canadians continued and we stayed in the old schoolhouse renovated as an albergue. It was cold in the night but with many blankets. However the heat stopped at 10 pm.


Today was not the best. The sky was dark, the hills brown, and the mud thick as I trudged along. Unfortunately I also had the 'trots' which made everything more depressing.

It was a GREAT relief to arrive at the Villafranca Monte de Oca albergue. In an old school the door is always open. I always feel at home here after spending 3 snowy nights during the 2006 blizzard (Camino 2).

After a hot shower I ate a delicious 'menu de dia' including paella and trout stuffed with ham at the El Pajaro a nearby restaurant popular with truckers. A long siesta followed. Now two Spanish bikers have just arrived; we three are the only pilgrims.


Early Tuesday morning was COLD! Puddles were frozen and hoar frost covered the ground although it still is 'only' October. Everyone that passed, pilgrims and locals, remarked that it was "frio". I am so glad that I brought my standard winter kit! Nevertheless, the weather was and continues glorious with brilliant sun and clear azure sky.

After crossing the rather depressing town of Belorado which resembles a deserted village in an old western movie I stayed at the pleasant parish albergue in Tosantos. The young hospitaleros, a Spanish guy and Belgian girl, did their utmost to make pilgrims feel at home. Late in the afternoon we all climbed up to a nearby hillside hermitage built into limestone strata. In the evening a simple communal dinner was served; then all twelve pilgrims 'hit the mats' to sleep on the rather frigid floor.

Today I moved on to Villafranca Montes de Oca. Every Camino I have stayed at this pleasant municipal albergue in an old school. Here, too, the door is always open. Each visit I recall being snowbound here for three days during the now famous 2006 blizzard; then this truly was a most welcome shelter! For tonight I am glad that there are bunk BEDS on legs. Floor sleeping isn't easy, or more accurately getting off the floor in the dark of night isn't that easy.