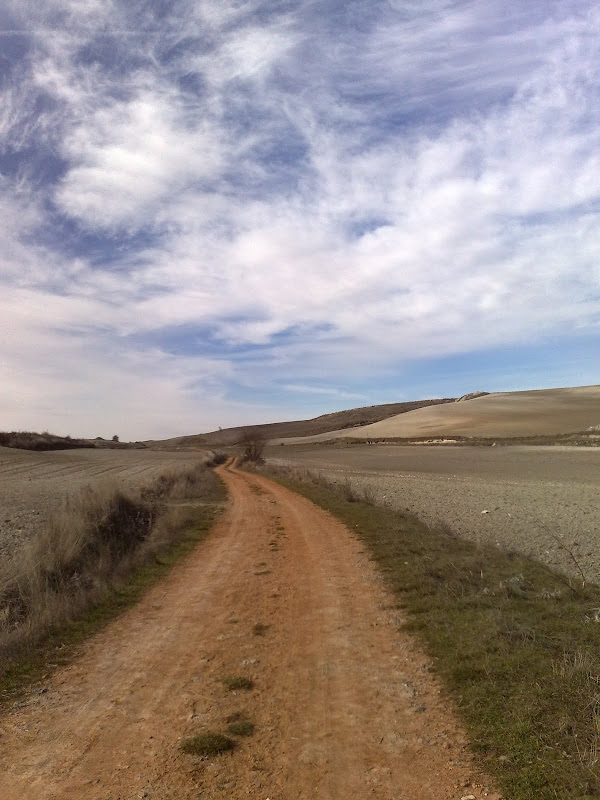 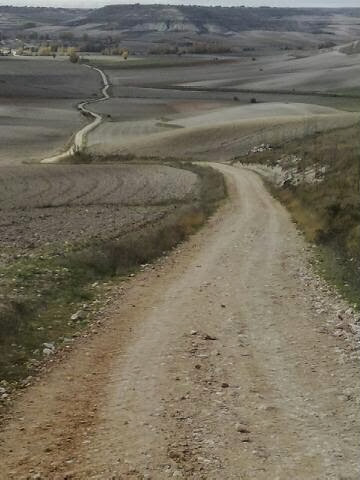 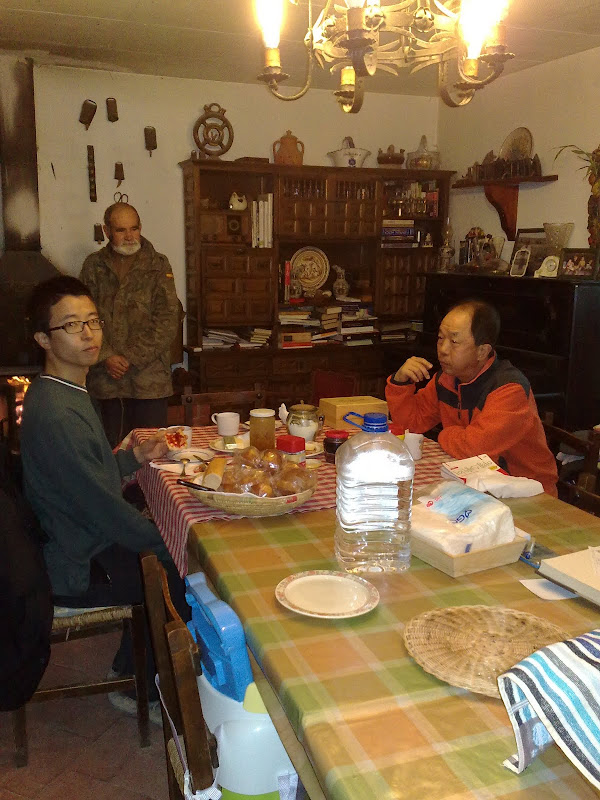 S tried to call a friend in Portugal for money without success; I loaned him 100 euros and we went on. Back on the Camino the sun shone and sky was cobalt blue, but the temperature was below freezing and bitter cold. Although the path was flat the wind was fierce. Treeless this immense Castillian plateau known as the Meseta must be hot as hell in summer, but it felt like the Klondike. We trudged 20 k across frozen mud and snowdrifts to Hornillos del Camino. Unheated, the municipal albergue was frigid, dismal and empty; at least there were blankets. An old farmer who lived nearby and served as hospitalero brought us cocoa powder and milk. We cooked pasta in the basement kitchen and crawled into our sleeping bags piled with blankets. Never in my life including the Canadian years have I spent the night in a colder interior space! Our breath hung suspended in the air!


Today I walked 20k to Hornillos del Camino. It was and is cold! Although tiring it was lovely to be alone up on the path crossing the hills. Only two other pilgrims here; an American guy who has walked all over and another German who has just begun. There is no restaurant open so he will share my food. I'll skip a shower and wear my knitted hat to bed. It is VERY cold without any heat.


We left Burgos early and walked up the hills to finally arrive at Hornillos de Camino. This is a miniscule town in the middle of the Camino. No shops. Albergue closed.

Had to wait 2 hours outdoors for the hospitalero to arrive and open the door. He was a doctor on vacation and called to am emergency case a few hills away. The place is undergoing renovation and the heating which was only installed 4 days ago is great. Last year it was freezing.


Left Burgos at dawn for a long trek across the city and eventually starting to climb the barren Meseta on the west. Walked about 26k in all.

Just outside Burgos the Camino passes a large prison with an old- fashioned panopticon plan where one guard could stand in the center and survey all. It appears to still be in use. One can imagine the frustration and bitterness of the prisoners towards the hoards of pilgrims free to walk at liberty on the Camino just beyond that fence!

Since the albergue in Hornillos is closed for renovation tonight I am off the Camino at a Casa Rurale called El Molino in nearby Vilviestre de Muno. This handsome bed and breakfast is a renovated water mill. After I telephoned the owner picked me up from the Camino to spend the night at the mill and will return me after breakfast tomorrow to the same spot on the Camino. A proper bed with sheets will be a nice change!