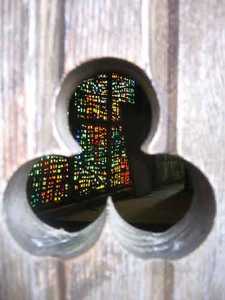 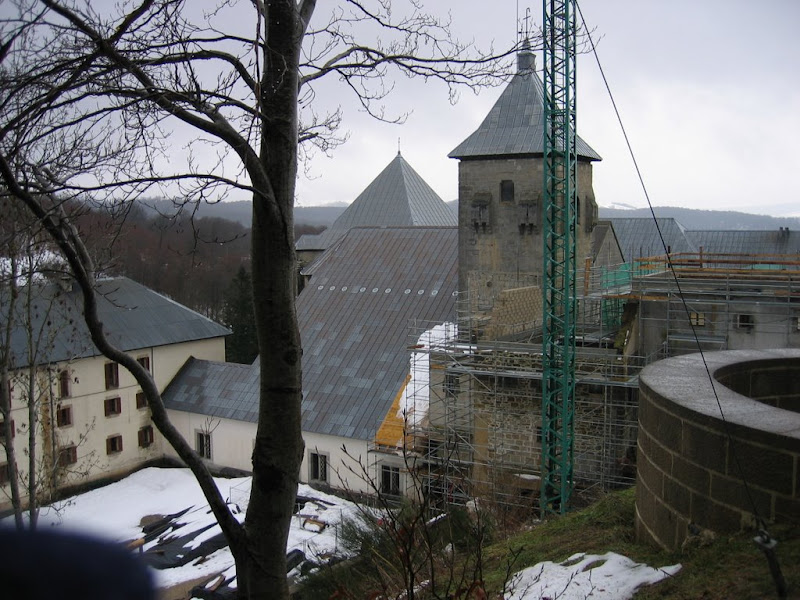 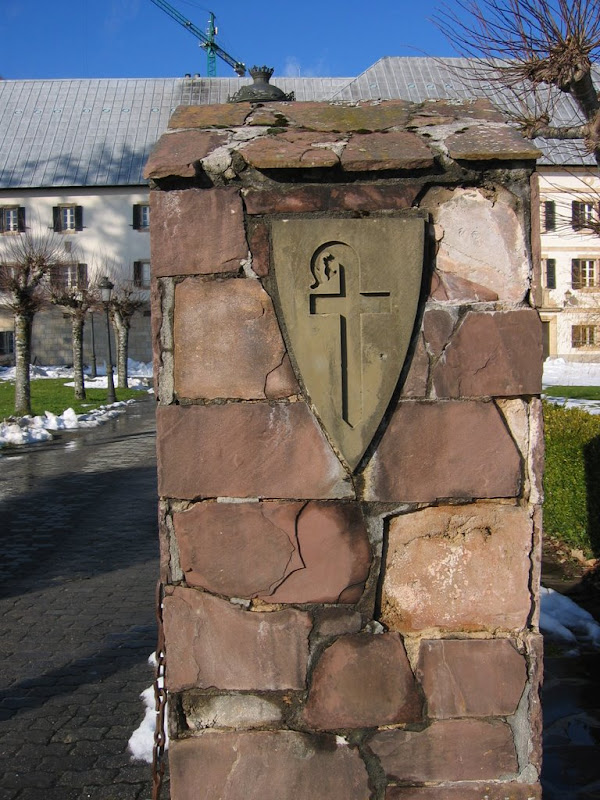 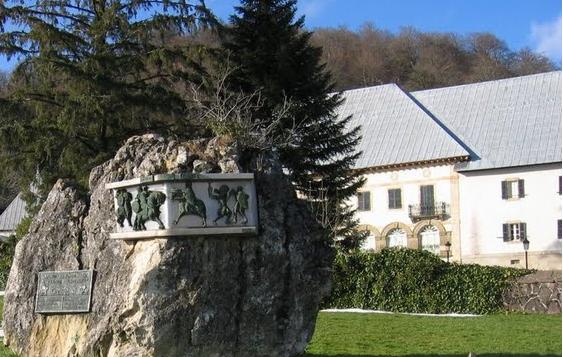 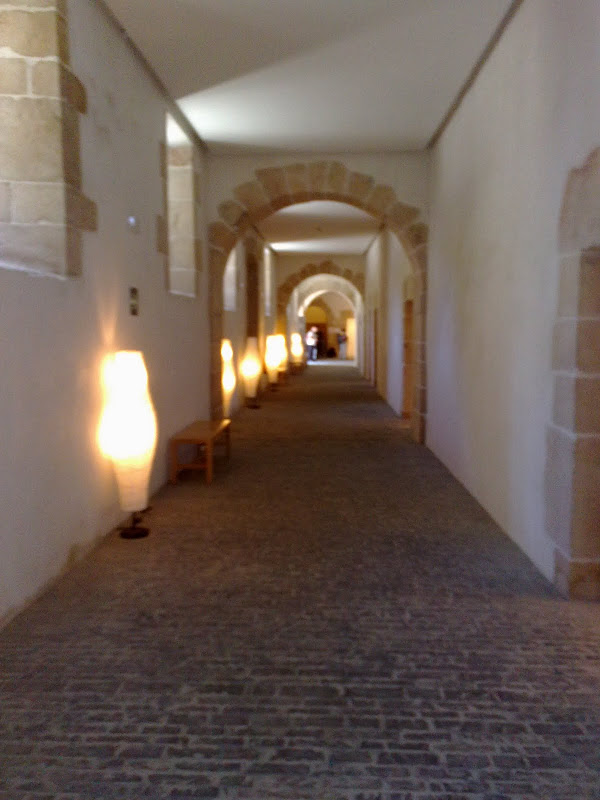 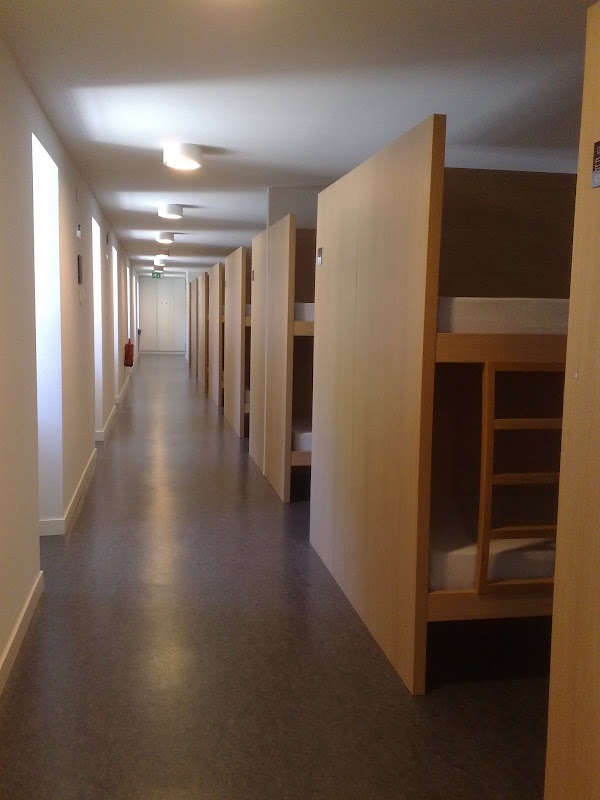 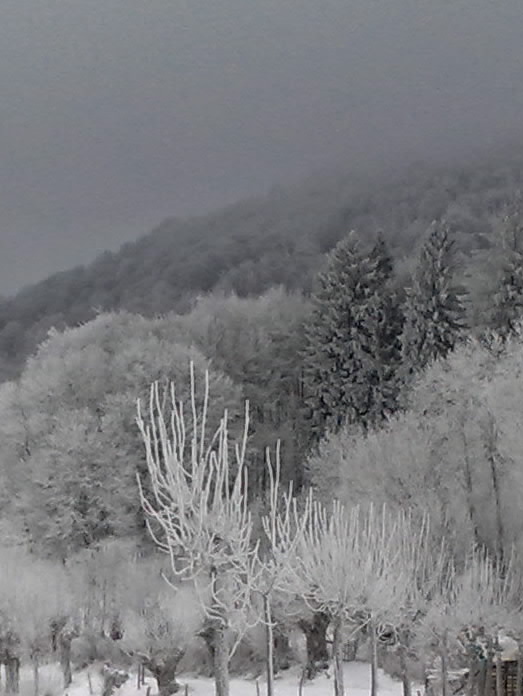 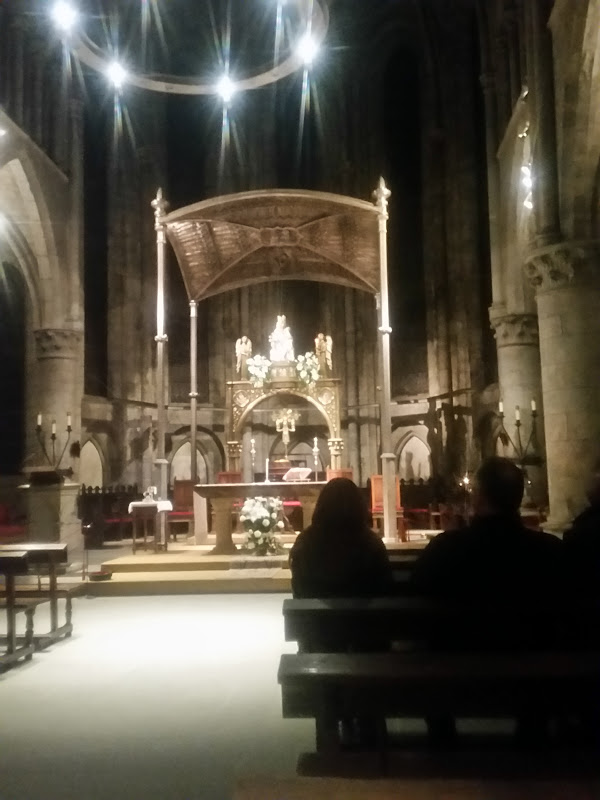 
Hiking 20 k up the 1060 meter Ibaneta pass to the monastery at Roncesvalles was one of the most difficult days on the Camino and certainly the most physically exhausting day of my adult life to date. I was pooped! Although I had hiked throughout the summer in preparation for the trip, nothing had prepared me for such an effort. Beneath a deep blue sky and brilliant sun I gasped and ached while my pack weighed like bricks. After hiking about 5 hours I finally staggered over the pass into a picnic area filled with a munching mob; they had arrived by bus and cars! Never will I forget the look that one très correct French woman drinking champagne from a crystal flute, no plastic for her, gave me as I trudged past exhausted! ET would have been better received. A kindly couple from Scotland offered me the best ever cup of tea from their thermos. Refreshed I continued on to the monastery, happy that the path was now slightly downhill.

Roncesvalles monastery is documented from 1127 as a pilgrims’ hospice; it still is in use as such. Earlier in time the picturesque site had been the battle scene for the defeat of Charlemagne’s army, immortalized in the medieval poem the Chanson de Roland. Today the many medieval structures are highly visited both by pilgrims and ordinary tourists. After attending evening mass and participating in the traditional pilgrims’ blessing I went to eat. Other diners at my table were 8 extremely well dressed and coiffed Italian men and one young fellow from Brazil. We shared the pilgrims’ menu and talked in French about our plans.

All of us stayed in the one room 80 bunk albergue. Recently installed in a buttressed Gothic barn without windows, it boasted a new ventilation system and superb tiled hot-water showers and toilets in the newly excavated basement – a great example of architectural adaptive reuse! To my surprise the Italians who were bedded near me all went to shower wearing thick terry robes. It was hard to imagine these carried in any knapsack since they would be bulky and heavy. Next morning all were awakened at 6:30 to pack in the flickering light of 80 flashlights. Outside I discovered the Italians’ secret. At a luggage van parked nearby they stowed their night packs and picked up others for the day! Although I never again saw these Italians, as time went on I learned that “real” pilgrims always carry their own packs and feel mighty superior to those who don’t.


In sunshine I climbed up 19 k to the famous mountaintop monastery at Roncesvalles. The hike was tiring but not as exhausting as it had been the year before. At the Ibaneta pass purple autumn crocus bloomed along the steep path. By chance the bicyclist from Valcarlos arrived just after I did. After lunch together we shook hands and wished each other “Buen Camino”. We never met again. That night spent in the 80-bunk, unheated dorm with a handful of other pilgrims was very cold. How might it be in winter?


Today I walked continually for 5 hours up the road to the famous monastery at Roncesvalles. Here pilgrims have been welcomed since the 11th century. Today at times there was sleet; patches of snow covered the fields. It was very cold! As I arrived exhausted on foot at Roncesvalles a tourist bus pulled up. Most of the fur clad passengers took my photo, a real pilgrim, through the bus windows! After eating a late Spanish lunch in one of the two inns I spent much of the afternoon visiting the splendid Romanesque church. It was wonderfully well heated! The small winter pilgrim albergue is also cozy. During the evening 4 Germans and 1 Norwegian arrived. We all shared introductions and hot drinks.


In Roncesvalles after a difficult hike up in the rain. All is cozy now. Tonight we are in the monastery dormitory rigged out for winter. All is fine. We will attend mass and the pilgrim blessing at 8pm and then eat a pilgrim dinner at 8:30. I feel fine but am tired tonight. However I should feel tired after that climb of 4 hours today. I will write more from Pamplona as there are too many people who want to use the computer now.


At last I am at the almost mythic monastery of Roncesvalles. It has been quite a day! Walked 18 k in 5 hours through strong wind, heavy rain, sleet and eventually dense snow! Saw no other pilgrims and few people. Tourists in one car that passed took my picture and the Guardia Civile asked if I needed help or a ride. Now it is GREAT to be inside, seated and relatively warm. I am the only pilgrim.

The monk who stamped my Credential invited me to the evening benediction for pilgrims. It was lovely. The service was held in the ancient Romanesque church (now cozyily heated) in front of the magnificent silver sculpture of the Virgin. Three monks assisted and asked me to stand at the altar. ...In retrospect how special it was to be the single pilgrim where crowds have stood throughout time. ...Today I took no photos since the storm was too strong.


It was a 6 hour trek to get to the monastery at Roncesvalles. Wind, ice and snow made the climb up the Ibaneta pass extremely tiring. I am pooped! A young guy from Hungary and 4 Spanish are also in the albergue. Outside is a winter wonderland and very cold.


Climbing up to Roncesvalles monastery today was, as usual, exhausting! Following the road's many switchbacks took me 4 1/2 hours to attain the 1067 meter height; finally pooped but proud, I staggered in. What a great pleasure it was to remove my pack and only sit! (If you have never hiked wearing a pack just imagine carrying 15 pounds of potatoes continually for half a day.)

By evening there were many pilgrims; some even arrived by bus! In the albergue last night there were 84 others besides me. Two reasons may account for this surge. October 12 is the Spanish National holiday. Many will walk only this weekend and next Monday before the holiday. Others are starting a mad dash to arrive at Santiago for the Pope's scheduled visit next November 6.

We all attended the traditional evening pilgrim Benediction and Blessing in the monastery church. More than 25 countries were represented! May we all find our way in peace.


Yesterday as the sole pilgrim in the comfortable municipal Valcarlos albergue, I awoke worried regarding the long climb ahead. It was a ROUGH five hour slog up the 1060 meter Ibaneta pass. Twice I had to lie flat on the narrow verges to catch my breath. At last at the top exhausted and elated I then "floated" happily down to Roncesvalles. What a wonderful relief!

Roncesvalles monastery has been welcoming pilgrims since the eleventh century. On earlier Caminos I have always stayed here in simple accommodations which were downrght minimal in winter. Now however much has changed!

An old wing of the vast complex has been handsomely rehabilitated into a splendid albergue sheltering well over 100 pilgrims. Sleek stainless steel kitchen, large dining areas, computer and wifi facilities plus a reading room are all available. A huge coed dorm is divided into cozy four bunk units. In mine were men from Japan, France and Germany. None had walked up but had arrived by taxi!!

Later in the evening we all attended mass in the ancient Romanesque church. Pilgrims from more than thirty countries were gathered for the traditional pilgrimage blessing. May we all go safely and in peace.


Tersilla, my new Italian pilgrim friend, and I slowly continued climbing up the alternate route from Valcarlos towards Roncesvalles. To help take our minds from the endless mounting switchbacks I recounted the importance of serendipity or fortunate good chance on the camino (as well as in daily life). Imagine our mutual surprise when as if on cue there suddenly appeared beside us an Australian pilgrim whom I had met walking last year!! We three were QUITE astonished by this coincidence and continued climbing up together!

Five hours later while caught in a fierce wind we at last staggered breathless over the 1060 meter Ibaneta pass and peered into the tiny new chapel to glimpse the stained glass. Exhausted but joyous we have now descended to this almost mythic monastery complex where we plan to offer our thanks and to soak our very tired feet.


Today was the first long HARD slog of this camino. Leaving Valcarlos as dawn broke at 8am it took me 5 hours to slowly climb up to the Ibaneta pass, altitude 1060 meters. This once was THE medieval route through the Pyrenees with a very early pilgrim hospice at the pass; today a small modern chapel marks the spot.

As past pilgrim multitudes have done I, too, joyfully shouted my thanks when cresting the pass and then weeping in exhausted relief slowly 'floated' into the historic Roncesvalles monastery complex which has sheltered pilgrims since the eleventh century. Recently, however, much has changed; a state-of-the-art albergue housing more than 100 pilgrims was created in a renovated 18th century wing. Sleek bunks are arranged in nooks for four. My fellow nook-mates were Swiss, German and Australian. Last night we four joined other pilgrims for mass and the traditional pilgrim benediction. May we all walk in peace.


Although my journey has only just begun at the early stops I have often heard repeated a new current fear of many changes coming soon to the Camino Frances. Hospitaleros, restauranteurs, bariestas and regular pilgrims all are concerned with what has and will develop for the summer crowds and especially those expected during the next Holy Year in 2021.

Worries include the ecologic impact on the land from the pounding of more and more feet as well as architectural change especially to rural villages and historic urban centers with the infusion of lodging for the anticipated throngs. Greatest is the fear of losing the special spirit of the camino where pilgrims are simply grateful for what they find to that of a callous demand for what new crowds might consider to be their rightful due. All of these are intense concerns regarding the immediate future along this beloved path.

Nevertheless thankfully the strong old camino traditions still do remain. Many, many local people wish pilgrims "Buen camino" as we walk through their villages as do the bicyclists who pass us on route. Shopkeepers and hospitaleros seem pleased to see us. Most importantly the religious traditions continue to be meaningful and consistent.

At Roncesvalles this evening Vespers service pilgrims from more than forty-five nations clustered at the monastery altar beneath the silver sculpture of the Virgin to receive the special benediction for protection on our ways...Thus we stood as pilgrims before us have stood for centuries and hopefully will continue to stand forevermore.