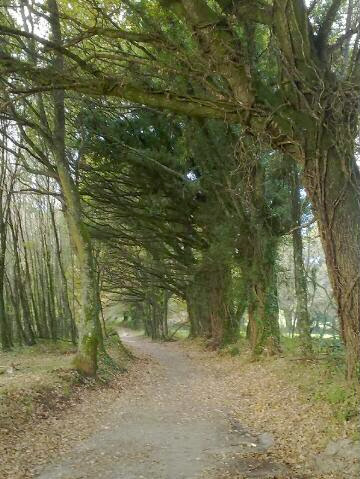 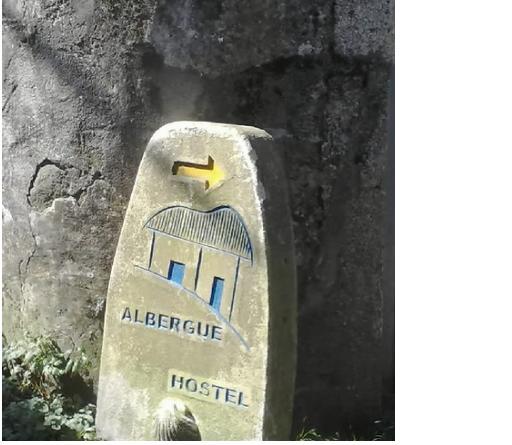 
Slightly depressed while walking alone in the unending drizzle near Cornixa where the Camino passed close to the highway I went into a roadside place for tea and toast. The excessive bill depressed me further! After 15 k I stopped at the municipal albergue in Melide. Since it seemed dark, chilly and damp, I gave the showers a miss. However, hearty pasta and friendly conversation shared in the albergue kitchen with the three English hostellers, Rob, Tony and Cath, cheered me up. Suddenly we realized that Santiago was only 50 k away. In less than 3 days we should reach it!


Walked with a Swedish pilgrim who has just begun. Hence, he is carrying too much and seems very nervous. One of the most important 'rules' of the Camino is to relax and 'let it be'. We stopped for a welcome second breakfast at the casa rurale Los Somozas in Coto. It is always very friendly towards pilgrims. Walked about 28k, but the way seemed easy. At Melide we shared a delicious lunch of polpo or octopus, the local specialty. Tonight the municipal albergue is cold so I will skip a shower.


Today we have crossed the fields and entered into the final province of La Coruna. We three are now in a rather tired albergue which needs refurbishing in Melide. It is only 51 km from here to Santiago, but we will need 3 days to cross easily the final hills.


It has been exceptionally hot for the past two days! Some pilgrims are wearing amazing combinations of clothing in order to cope, ie wet tee shirts as sun hats! This morning 2 German girls and I got up very early in order to be on the Camino by 8 am to try to escape the midday heat! What a difference from 2 months ago at St Jean Pied de Porte when all was still dark (and cold) at 8 in the morning!

Now the Camino has become a narrow forest path crossing numerous hills covered with endless groves of tall eucalyptus trees. At least there is some shade!

The Melide albergue is not the best; about 12 pilgrims are jammed into one airless small dorm. For some unknown reason the heating is also on full blast! The effect is tropical so I have moved into the spacious, unheated lounge and unrolled my sleeping bag across 4 chairs. It is firm, but I will sleep.


In milky sunshine beneath the first eucalyptus trees I walked alone to Melide. Mid route met a nice Quebeçois retired couple who had been walking since September when they started from Le Puy in France. Weary, as we all are, they were determined to reach Santiago within the next two days. I will take a bit longer and hope to arrive by mid-day Saturday.

The Melide albergue has been completely redesigned and refurbished. However, the work is not yet quite finished. We pilgrims that were there slept amidst fresh paint and plaster dust, LOTS of plaster dust.


Now my 9th camino is coming to its end. For me this has actually been three concurrent journeys - looking back into historic time at the cultural heritage along this beloved pilgrimage route, traversing on foot contemporary northern Spain east to west, and a deeper discovery of myself. Walking alone has required constant adaptation to changing weather and varied terrain while at times overcoming irrational (?) fears of crossing high bridges or descending slippery scree. Nevertheless as always I have relearned the importance of personal tenacity and endurance. Those long slogs up the Ibaneta pass or into the cities of Burgos and Leon seemed endless. However I did arrive pooped, but walking upright and always carrying my full pack thinking like Churchill after Dunkirk I WILL go on to the end.

On a happier note serendipity has brought much daily joy such as viewing alone within a silent wood the vivid colors of an early winter sunrise or sharing triumphant laughter with a new camino friend after we successfully crested O Cebreiro. Most importantly I have relearned the necessity for sincerity in all our interactions and been privileged to experience the overwhelming power of true caritas, that special spirit of unconditional selfless love towards others as offered by some to many along the camino.

May we all be so caring and generous.