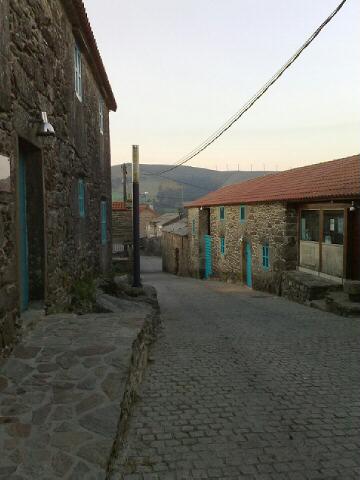 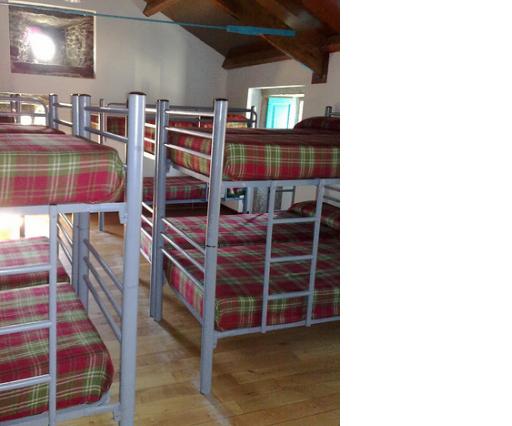 
At last the rain stopped! It was a long, tiring day; the trail meandered through many tiny stone hamlets but at least we were slowly drying out! After 21 k the four of us arrived at Olveiroa. The municipal albergue was great; a small group of stone farm building had been restored handsomely. Dorms and dining room were separate. Bright plaid blankets covered the bunks. The tiled bathrooms had hot water and good showers. Bliss!

A handful of other pilgrims were there besides we four. All ate together in the common kitchen where the gracious hospitalero served steaming bowls of thick homemade soup, country bread, red wine and fruit. Delicious! How wonderful it was to be comfortable!


An unbelievable day! Walked 33k in rain to get to Olveiroa! One of the HARDEST days ever on any of my Caminos; almost as exhausting as the first time up to Roncevalles!! This municipal albergue is a very successful renovation of stone farm buildings. Many pilgrims are here; we all shared a common supper cooked by the kind hospitalero. She remembered me from last year. Now to sleep.


The weather today was glorious with a clear blue sky and fresh wind. However the camino was a long 33 km across hill and dale. We were all exhausted from the trek. At the Olveiroa albergue I went to bed at 7 pm even before the sun went down.


Walking carefully through sleet, snow and rain Anita and I followed many wet, narrow lanes crossing 23kms of higher and higher hills to eventually arrive exhausted at the wonderful albergue complex at Olveiroa. Here were cozy blankets, working radiators, and hot water, plus the kind hospitalero who remembered me from past years. What welcome comfort in contrast to the previous frigid night ! Many other pilgrims were fully exhausted since they had done the total 33kms under severe conditions.


The past week I have walked west towards the sea. Leaving Santiago de Compostela just after dawn Monday morning was sad. When crossing the almost empty Plaza Obradoiro and passing the immense cathedral, of course, I silently vowed to return once again on foot (same time next year?).

Late in the cold afternoon I arrived at the Neigreira ACAG albergue. Recently renovated with only 20 beds (not bunks) and great HEAT, this was a good place to stay. Most other occupants were Spanish male long distance trekkers doing 50 k per day. All had lots of great equipment and clothing; their lime green reflective parkas certainly out classed my yellow jacket! They rose early Tuesday anxious to start well before dawn wearing head lamps to see through the dense fog.

Since my comfort level is 20-25 k per day I stopped Tuesday night at the private albergue in Vilaserio. Clean and new with good showers it nevertheless has NO heat! Although warned by the barman/owner I stayed. Luckily heavy wool blankets were available. With three of these on the bed and wearing my wooly hat I slept through the frigid night.

The next day's walk over the hills and down into Olveiroa was, as always, a pleasure; restaurant staff and the charming hospitalera all graciously greeted me by name and recalled my earlier visits! Although along this stretch 'on a clear day you can see forever' unfortunately dark, heavy clouds were clustering on the horizon. Little did I or the few other pilgrims realize what an intense storm was about to begin. Unfortunately the weather forecast is for the storm to continue for several days.