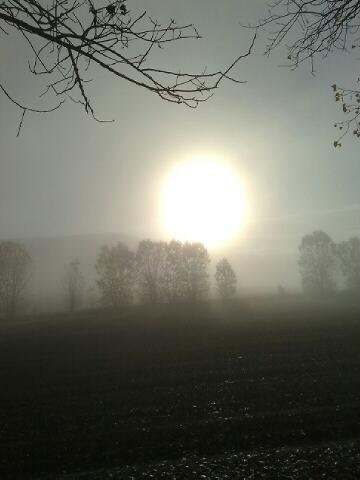 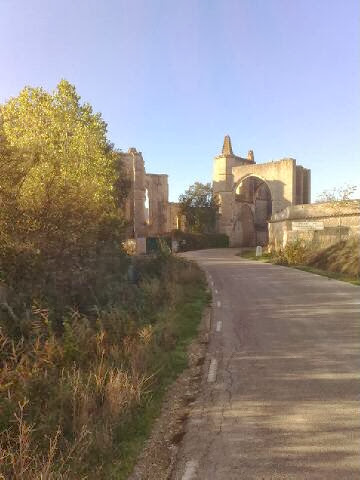 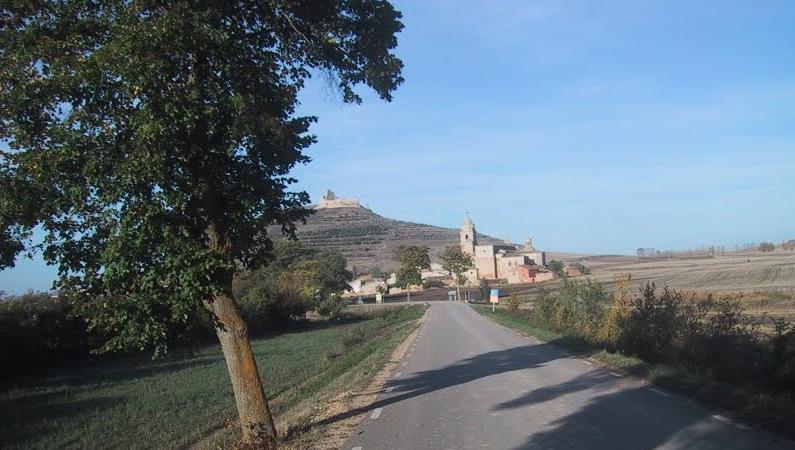 
The weather turned milder as we walked 20 k out of the snow and into the mud. After passing beneath the great arch of the ruined St Anthony monastery which once cared for medieval pilgrims we stopped at Castrojeriz. One bar with a Brazilian connection was most welcoming; the hot coffee and buttered toast were flamboyantly served! Deep sticky mud slowed the climb up the Mostelares plateau to Itero de la Vega. The private albergue was a dorm room within a simple inn outside town. Local trout stuffed with ham comprised the first good hot dinner in quite a while! In late evening two young German guys arrived lugging huge knapsacks.


Following quick cups of cocoa in the bitterly cold kitchen the German and I set out. The landscape was frozen; all color reduced to gray, beige and palest green beneath a milky sky. A strong, icy wind blew from the west. After 10k crossing this bleak landscape we arrived at this tiny village, Hontanas. It was too early to stop at the municipal albergue. Nothing else was open, but the sun at last appeared. Slowly the path leveled becoming much easier. Another 10k and we arrived at Castrojeriz. He went to a hotel and I found a small private albergue which has just opened this morning. Back windows are stuffed with old newspapers, but the young Spanish guys who run it are thrilled to host their first pilgrim, me!


We are now in the municipal albergue in Castrojerez. Quite comfortable and good showers. Another pilgrim, Spanish, is here. He has walked to Jerusalem and worked for several years as a hospitalero in Santiago. Interesting guy with all kinds of Camino tales. Some good some terrifying.

The walk this morning was 20 k in a low fog across beige hills with nothing in sight. The via of vida is the proper expression, the way of emptiness.

I am looking forward to a good dinner tonight in a nearby tavern with a Brazilian connection where I have often eaten over the years. They have a big picture of the author Paulo Coelo standing with the owner next to the door. The owner, always the diplomat, said he remembered me from last year.


Yesterday at the Casa Rural I never had dinner, but ate a picnic in my room instead. In the night other guests arrived. We all met at breakfast this morning. They are also pilgrims, a father and adult son from Korea taking time out 'to get to know each other'. Eventually our host drove the three of us back to Hornillos to continue following the Camino.

We set off; the guys in front since I like to walk slowly. After one or two kilometers suddenly there was a spurt of patting their pockets followed by looks of disillusion. Something was missing! Indeed the father had left his Credential and wallet on the breakfast table now located 8 kilometers away!! He asked me to telephone the Casa Rural for help.

It was quite a conversation with me speaking French and English and the staff Spanish. Nevertheless all was somehow understood and they kindly brought his forgotten items to him.

Now 24k later we 3 are in the pleasant municipal albergue in Castrojeriz. There are also an Irish guy and a Spanish couple. The Spanish are traveling with a DONKEY which is noisily eating outside the window! He also seems to snort a lot. ...What a world!


Leaving Burgos yesterday was pleasant since the westward path follows the river. I planned to have an easy day stopping in Rabe de las Calzadas. Unfortunately the private albergue although marked open all year was closed. Thus late in the afternoon I had an uphill 8km climb on gravel in drizzle to Hornillos del Camino. The cozy renovated municipal albergue was booming with Scots, Australian and Brazilian men plus a Japanese woman.

Today our informal group crossed 20km along the top of the hills through wind, rain and a bit of sleet to Castrojeriz. All are tired, but will go on to the end.