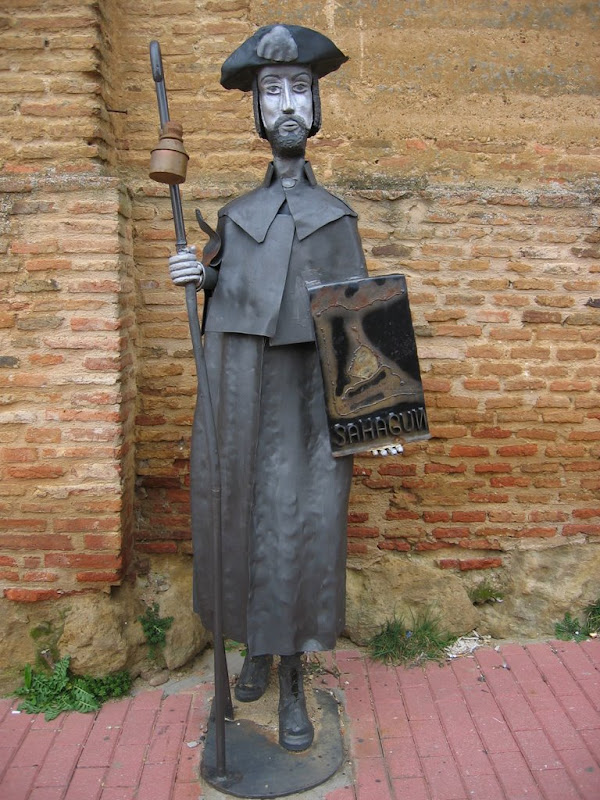 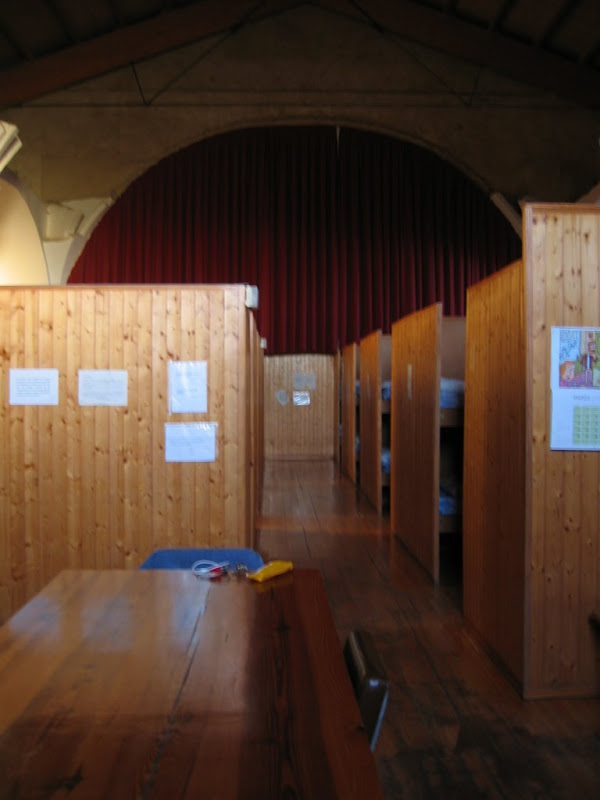 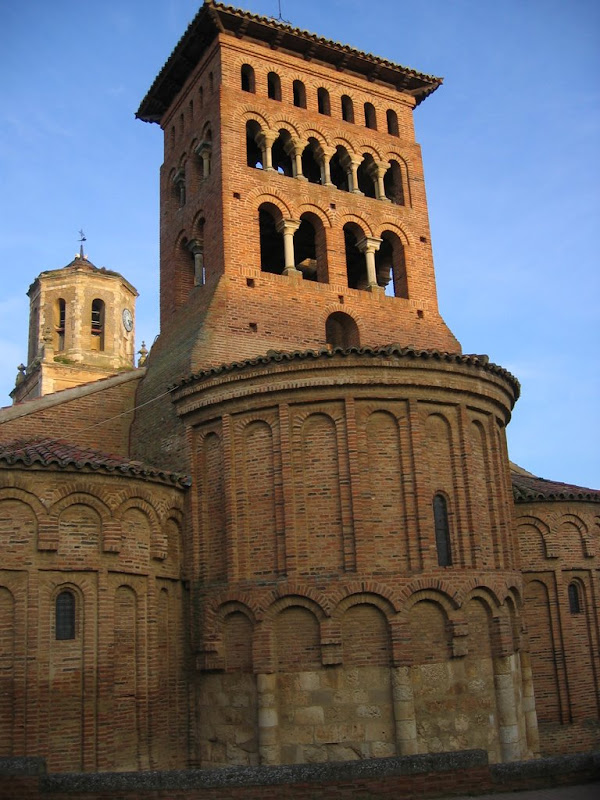 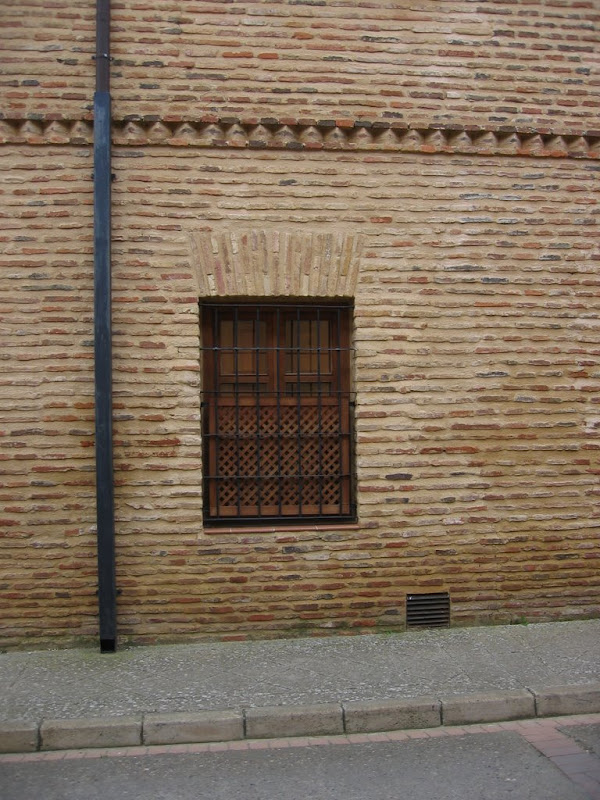 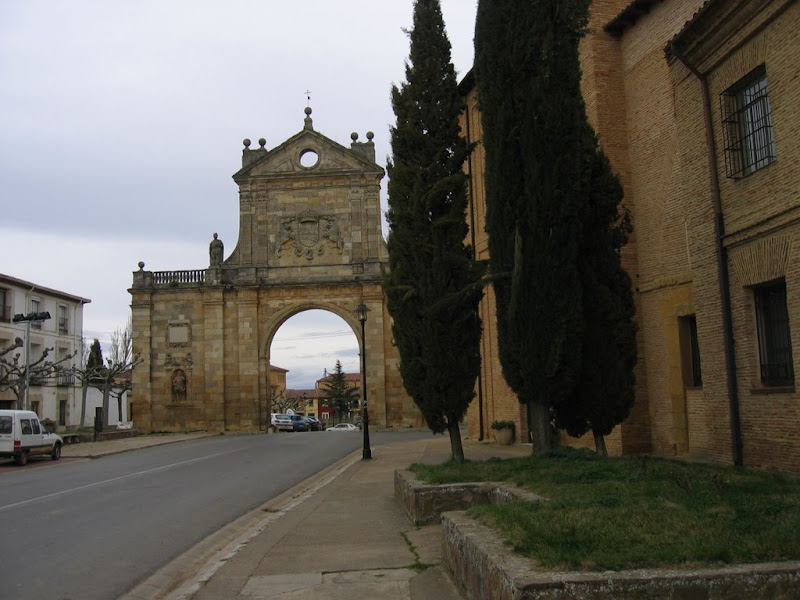 
Early in the morning I rejoiced that after 4 weeks on the Camino the mid way point in kilometrage to Santiago was passed. Only 387 more to go! Envisioning an imaginary trail map divided in two I was starting on the second half. Under gray skies and increasing rain the path became slippery brown mud across brown fields. Cold, wet and slightly depressed at San Nicolas I stopped for coffee and stayed for lunch. This humble hamlet had one café and one street, the Camino or Calle de la Francesa. The simple brick church was closed. Brick construction is typical of the Mudejar period, named for the Moors who remained in Spain after the Reconquest in the Middle Ages.

Eventually I arrived at Sahagún. It was hard to realize that this sprawling provincial town for centuries had held the most powerful Benedictine monastery in Spain, equivalent to Cluny in France. ‘Facundo’, the name of a local martyr, became ‘Sanctum Facundum’, the name of the monastery, which evolved into ‘Safagun’ and later ‘Sahagún’. Most of the huge complex was destroyed in a 19th century fire.

A clever contemporary steel sculpture of St James dressed as a pilgram (his head was a garden spade) marked the entrance to the municipal albergue. It was a friendly place in a unused church building. There were several other women pilgrims; one Swiss, Mirta, and I decided to hike together.


Perhaps I “overdid” when enjoying that copious meal since I had tummy problems in the night. S had run out of my money so I loaned him another 100 euros. It was a long tiring 24 k trek across bleak fields. However at San Nicolas we had a delicious lunch in a small wayside place where I had stopped in 2004. Their rabbit stew was great! At Sahagún we stopped at the large municipal albergue installed upstairs within a old church. Plywood partitions divided the huge space into alcoves with four bunks in each. Unheated it was too cold to try a shower. The few other pilgrims included one guy traveling by bicycle. In the middle of the night footsteps stumbled up the stairs. Since there was no live-in hospitalero a local drunk had come in to sleep; he was gone by morning.


Quite a day! Hiked 24 k against the wind to Sahagún. Had a delicious lunch at Casa Barrunta in the village of San Nicolas where I have stopped before. Then the "fun" began. From the highway which parallels the Camino a horn honked several times. One Spanish pilgrim from last night rushed across the road. She explained that a Portuguese guy wearing camouflage was walking and a criminal. For my safety she offered a ride. I said thanks but I would continue to walk.

Within 10 minutes I heard someone behind on the gravel path. Bingo! It was a young guy wearing pink and grey camouflage! We look at each other. I say "Hola!"; he grunts and passes. Arriving at the municipal albergue I try to explain the situation to the hospitalero. She gives me a key to lock myself in. The place is huge and I am alone. Time passes. While in the loo I hear heavy footsteps mounting the stairs. Nervously I investigate. Two big cops and two pilgrims with bikes have arrived! "Senora, we brought you some protection" said the cops. We all laughed and shook hands... Now to sleep!


Well, we eventually arrived here after walking in just shirts and sweating like mad under a hot sun in a deep blue sky.

Polo and I ate in a nice little restaurant that I know in San Nicolas on the way. Great food, old interesting junk on the walls and, for some unknown reason, photos of Indochina 50 years ago.

At the albergue in Sahagún the hospitalero was Russian, wore an parka with fur collar and gloves indoors. Not very reassuring for the warmth of the dorm! However it was fine. It was 6 men and me. Including a new young German guy and a Brasilian, all of whom are still with us.


Today I walked alone about 23k to Sahagún. The municipal albergue is closed for renovation so I am in a simple hostal across the street. Somewhere mid-morning the halfway point to Santiago from St Jean Pied de Port was crossed. Hence now I am on the 'other side' of my mental map.

En route at San Nicolas del Real Camino I ate Sunday lunch at the Casa Barrunta where I always stop. The food is good and they are pilgrim friendly. During the past five years nothing has changed except the waiter looks a little older, but so do I!