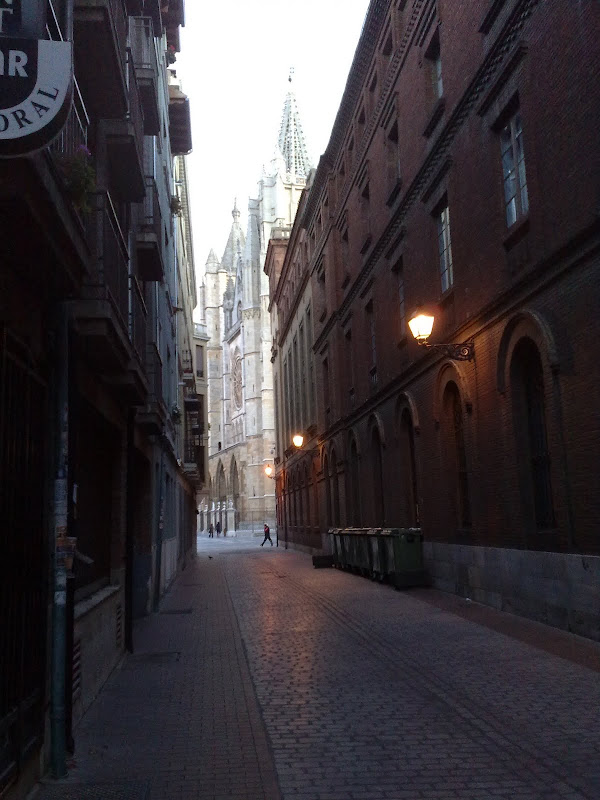 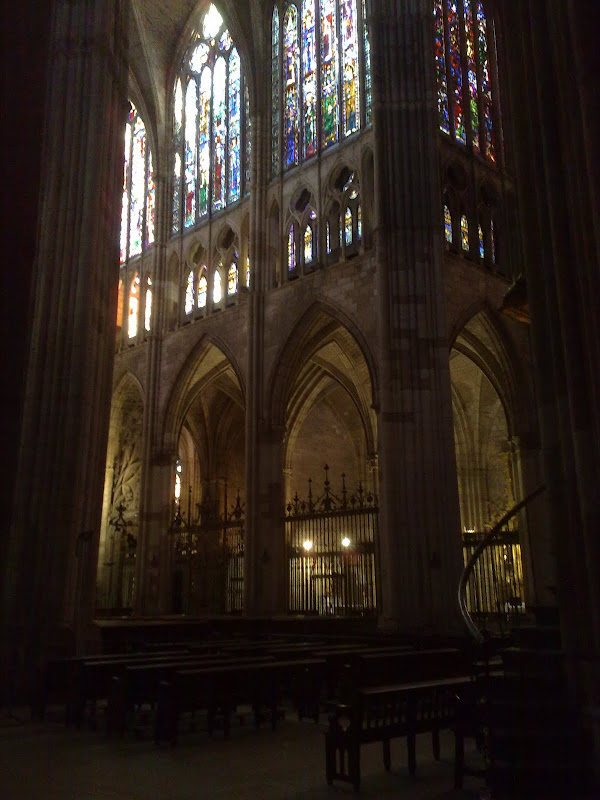 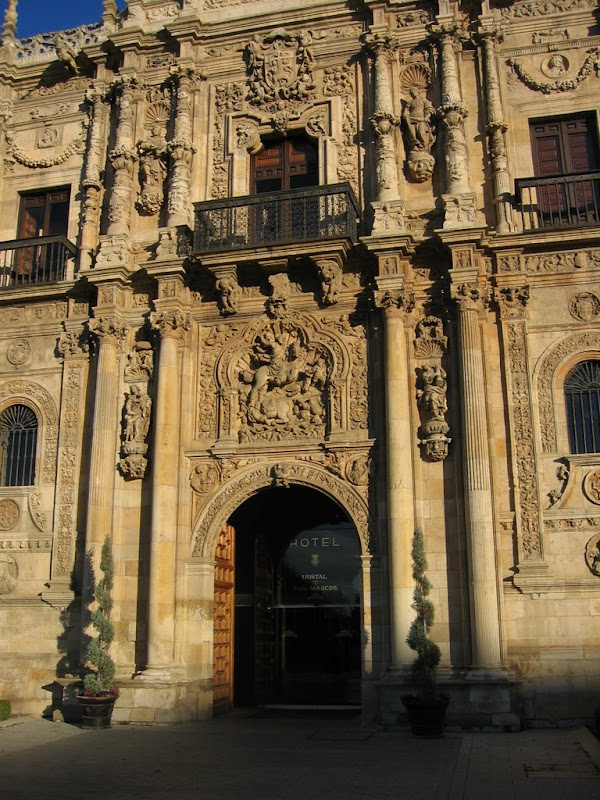 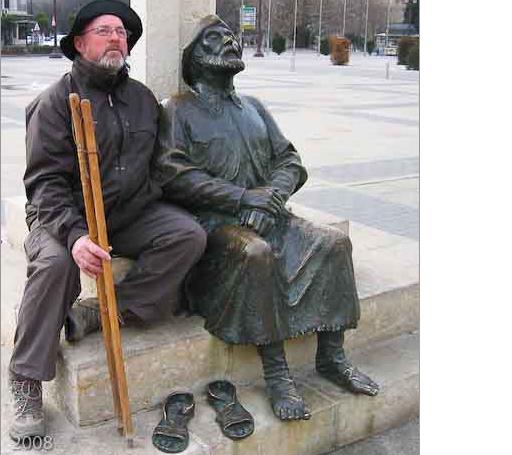 
It was cold and dangerous hiking 17 k into the city of Léon; several times the Camino crossed a busy highway. Along the way Mirta and I met an older Englishman who walked with us. We all stayed in the Benedictine convent, Santa Maria de la Carbajalas; it had large separate dorms for men and women pilgrims, but no heat. Nearby was the massive Gothic cathedral; magnificent stained glass illuminated the interior. On the main western façade is a sculpture of St James. Another important religious building was the Basilica de San Isidoro. Dating from the 11th century the walls and low ceiling are covered with Romanesque frescoes in muted tones; the biblical figures are weighty and outlined in a nervous black line. Memorable.


Much of the 17 k walk to Léon was harrowing and dangerous since the Camino often crossed a busy national highway. We stayed at the Benedictine convent of Santa Maria de Carvajal. Centrally located near the cathedral it was very hospitable; at the entrance desk a big bowl offered delicious homemade cookies. Although it was a large place there were fewer than 20 pilgrims. Since I felt miserable I asked to stay two nights. The helpful hospitalero asked the Mother Superior and an exception was made to the usual one night rule. Feeling better in the morning I walked about the historic city revisiting the cathedral and the magnificent cloister of San Marcos. After S spent a lot of time on the telephone he announced that a bank debit card had been air-expressed to Ponferrada, a future stop about 80 k away, and asked if meanwhile could he borrow another 100 euros as a last loan.


It was a long, cold 17 k slog in the rain to Léon. Also it was dangerous since the Camino crosses a very busy highway. Dashing amidst the traffic was nerve wracking! What a relief to get to this calm albergue run by the Santa Maria de Carvajal nuns. Since it is the "slow season" I am allowed to stay two nights.

After washing all my hiking clothes I wandered about town and revisited the magnificent Gothic cathedral. Within that vast dim mysterious interior the jewel-toned stained glass is glorious. I also visited the San Marcos Monastery which was built as a pilgrims' hospital in the 16th century. Covered in scallop shells this sumptuous riverside structure today is a super-deluxe parador. After viewing the unique cloister garden I treated myself to a thick hot chocolate. Delicious!


From Mansulla de las Mulas we walked about 20 km yesterday to Léon. It was cold and I felt dreadful. Stayed in the warm and very comforting convent near the cathedral. Did nil but take a hot shower and wash my clothes in a proper washer-dryer and take a long siesta. All the other pilgrims were men except for a very grouchy German woman. She must have been from old East Germany for she never smiled. Luckily we seem to have lost her.


I walked 17k into Léon yesterday under a cobalt sky and brilliant sun. It was actually hot!
Just before the Camino entered the city it crossed a major highway. Dashing across those several lanes of traffic is always unnerving and dangerous. What a relief to arrive on the other side in one sweaty piece!

I am staying two nights at the Benedictine convent near the cathedral. Very pleasant; it is comfortable, clean, heated and serves a good free breakfast. The Mother Superior said that she remembered me from past years! I think it is my age, glasses, white hair, and tan as well as the fact that I always wear the same navy blue clothes that people remember. How to create an image at 69!

Mid morning I sampled one of the delicious gastronomic specialties of Léon; hot chocolate so thick that the spoon almost stood up in the cup. This was served with freshly made cruellers. What a delicious, caloric treat! Fuel for tomorrow's trek.


Today walking the last 20km into Léon was COLD; the unceasing wind took one's breath away. Because of the wind I had much difficulty crossing two major bridges. At Puente Villarente the historic bridge is presently too narrow for two lanes of traffic plus pedestrians. After an oncoming truck ALMOST pushed me off I shook with fear for quite a while!

Closer to Leon amidst industrial sprawl a new pedestrian bridge carries pilgrims high above the auto-route. When I got there the wind was so terrific that at first I could NOT MOVE! Seeking help but seeing no other pilgrim I backed down the ramp and calmly walked into a nearby BMW car showroom. After I explained that I needed assistance to cross and that we had a BMW in France the slightly astonished but very elegant manager put on his coat and took my arm. Eventually we both made it across, wind-blown and breathless! With a casual 'Adios' he further added that he had never walked the Camino and if it was all like this crossing he certainly never would!


Each time that I have walked the Camino Frances one section that I have particularly dreaded and even feared involves crossing varied bridges just before entering Leon. In the past we pilgrims walked on a narrow medieval bridge at Villarente in frightening competition with on-coming contemporary lorry traffic. The traffic usually won. Earlier this year a dedicated pedestrian-only bridge was added. What a relief it was today to gently stroll along this elegant wooden way without fearing being hit or run over!

Closer to Leon another pedestrian bridge but of metal spans high above several lanes of rushing highway traffic and seems to sway in the wind. For much of last night I worried about re-doing this and awoke determined but frightened. Since many pilgrims take a bus into the city I was alone and nervous most of the route. Happily, however, at the EXACT moment when I needed much moral support to put my foot on that first metal step and move a charming octogenarian French couple appeared and chatting nonchalantly we three crossed the bridge as if we all had wings.

I'm VERY glad that these bridges have now been crossed!