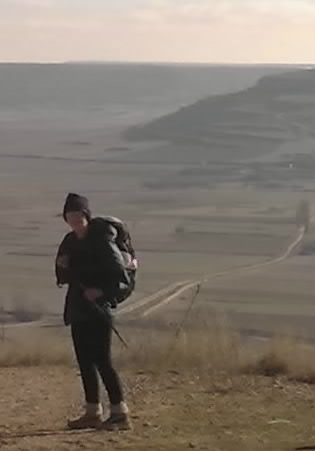 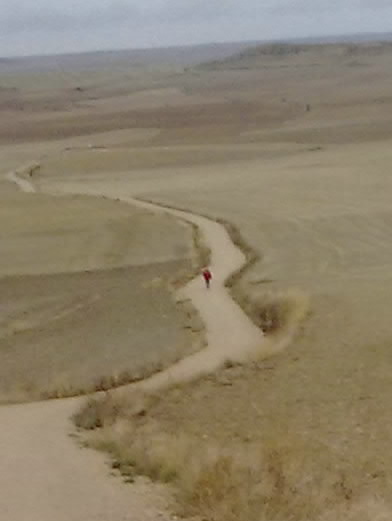 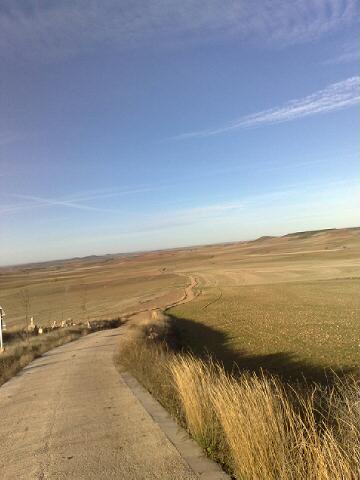 
Gaining physical stamina and greater confidence I resolved to try to hike at least 20 k each day from now on. Brilliant autumn sunshine also helped my determination. Passing beneath the arched portal of the abandoned San Anton monastery the picturesque route continued to Casterojerez.

Distant on a hill were the remains of a 13th century castle; this was ‘postcard’ Spain. Dedicated to the Virgin Mary the exhibit in the Santo Maria del Manzano museum was a pleasure. Both the installation and the artifacts were first rate. It took nearly half an hour to traverse the town, which has one long main street, the Camino.

On the west after a medieval bridge the trail suddenly climbed steeply up the Mostelares plateau. Plodding alone was a young English man; we shared our water supply and walked on chatting. Last year he had walked all the Camino except for a few kilometers, which he was presently completing. After slowly crossing an immense dry plain eventually we arrived at Itero de la Vega. A stork and its shaggy nest were perched on top of the church tower. Next door was the municipal albergue; it had 18 single beds, not bunks. Parked in front was the white van! A Quebec woman pilgrim, the English fellow, and I shared conversation, salad and pasta offered that night by our gracious ‘guardian angel’.


As usual during past Caminos I ate a delicious breakfast at La Taberna in Castrojeriz. It is a friendly place with great food. Next came the steep ascent up the Mostelares plateau. However, the gravel path is broad and the panorama from the top is superb! Alone with my thoughts I crossed the high pass. After 10k at Itero de la Vega I stopped at a private albergue on the east of town. This is a dormitory space within a simple inn. There are no other pilgrims. Took a long hot shower.


Polo and I climbed up to a high plateau from Castrojeriz and continued across empty fields to Itero de la Vega. There we stayed in a pilgrim room within a simple hotel, It was only 6 euros and not bad at all. The food ,however, was nothing to rave over.


Yesterday was another lovely morning with a pale blue sky and gentle sunshine. Gerry, the Irish pilgrim, and I had breakfast near the albergue at the Taverna a bar which has a Brazilian connection. They are always very welcoming to pilgrims. The owner, a true diplomat, said "Hola Americana!" as I entered! What a memory! After copious servings of toast and fresh orange juice the two of us set off.

It was a steep climb up the next mesa but the view from 'the top of the world' was worth it. One could see widely for many kilometers; to the east the path we had taken and to the west the path we would take. It was a brief, perfect moment.

Then suddenly perfection was smashed. My phone rang with a text message/bill from the French service provider. The sum was HUGE! Services I had believed to be included in the basic plan were all charged individually by the minute because I was in Spain. What a jolt!

Gerry and I continued walking down into the region of Palentia and the village Itero de la Vega where we stayed in a private albergue at the entrance to town. Two Spanish guys joined us. Unfortunately Gerry and I were sick in the night.


Up early with the long distance 'boys' I arrived at my favorite bar, La Taberna, in Castrojeriz for a mid-morning breakfast. True hot chocolate so thick that the spoon could barely turn and thick slabs of buttered toast were delicious! The gracious owner/barman remembered my past visits and requested that I return again. Might it be so.

Well fortified I slowly climbed onto the high barren Mostelares plateau to continue alone along the Via de Vida or Way of Nothing for 10km or so. Apparently only the singular ribbon-like path of the Camino crosses this vast emptiness. For several kilometers neither no built thing nor no one else could be seen. During such moments one feels truly alone and minute, nothing more than another blade of grass.... Eventually I stopped at a private albergue in Itera de la Vega.


Walking along the lonely stoney spine of the area known as the Meseta has been rough these past few days. Cold, wind, rain and thick heavy MUD were prevalent passing through Hontanas and Castrojeriz. Yesterday after climbing the last high crest for the immediate future I finally arrived at Itero de la Vega, a farming village.

For the past few years I have always stayed here in a small tavern, Puente Fitero, which has a private albergue in cabins. Their food is not so great, but the 6€ price, cleanliness and HOT showers can't be beat! Each cabin has it's own bathroom and bunks for 8 pilgrims. However, by chance I was alone in "private luxury". I thought of taking two showers to celebrate, but was too tired to make the effort!

What was intended to be only a siesta before dinner turned into a long sleep until 11pm. Hungry I made a cup of tea using my invaluable portable water boiler and rummaged through my food sack for something simple to nibble. Hence I discovered the solid Russian chocolate. Given to me at our b&b by a kind guest who had gotten it on a Volga river cruise, these well-traveled sweets were the perfect finish to an unforgettable day!