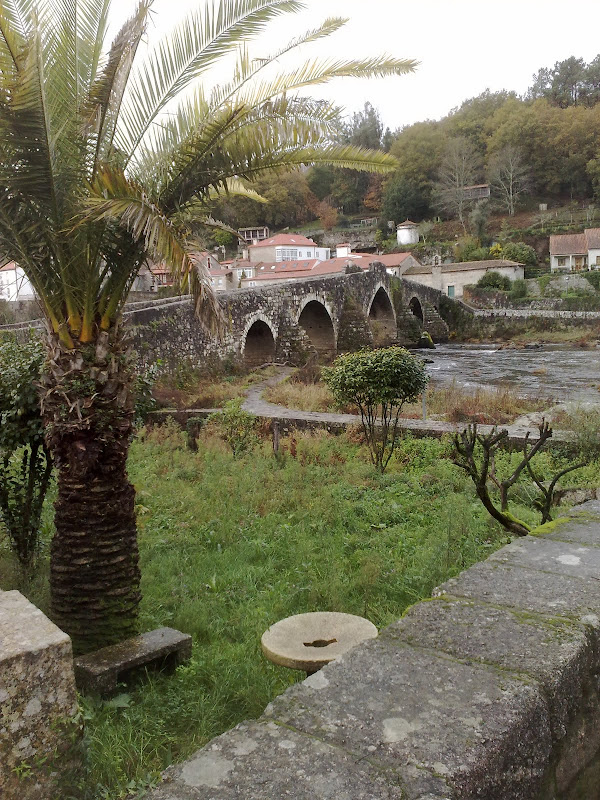 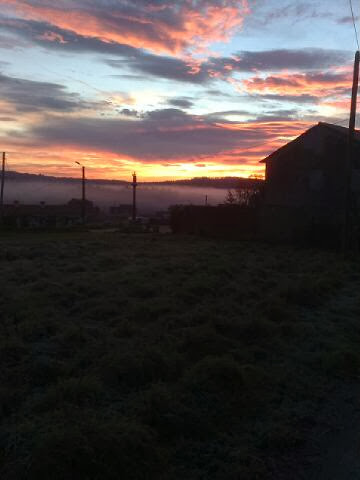 
After a hasty breakfast in the good café and a fond farewell view of the cathedral, Rob, Tony, Cath and I set out for Finisterre. We should reach it in four days hiking. Known as Fisterra in Galician, this extreme point on the Atlantic west coast of Spain was considered the end of the world until the time of Christopher Columbus. A pagan pre-Christian route as well as a medieval pilgrim route had led there in the past.

As we began to leave the city as if on schedule rain began to fall! It never ceased. The route was a constant series of up and down; never steep, but tiring and very wet. At Ponte Maceira beneath the renaissance stone bridge the swift water of the Tambre river was white with rapids. Crossing was rather frightening. After 19 k we stopped at the municipal albergue in Negreira. It was great to get out of the wet. Two German guys were also there. After welcome hot showers and stringing lines across the dorm to hang up our soaking things, we cooked pasta for supper in the communal kitchen.


Left Santiago in the rain and without breakfast which a mistake. Started walking towards Finisterre on the Atlantic coast. At times the trail was muddy and steep, but I made it. Now after 19k I am in Negreira at the pleasant municipal albergue. There are about 20 other pilgrims. All seem surprised at my age and determination. Wet ponchos and clothes are dripping all over. One guy from Holland made soup for everyone. Going to bed early because tomorrow will be hard.


After saying goodbye to Polo at the morning train I slowly walked alone through the suburbs and eventual countryside 23 km to Negreira. There were only 3 other pilgrims in the albergue. All were men - one Polish, one Spanish and one Irish. We were all aiming for Finisterra.


On Tuesday after a quick final breakfast with Adelardo I slowly made my way out of Santiago in steady rain to Negeira. It was a long, sloppy slog of 22km across many hills through eucalyptus forests and much mud. Walked on and off with Anita, a young Korean girl with very sore feet. We two plus a Quebeçoise and an Australian girl were the only pilgrims at the municipal albergue. Luckily it was well heated and there were many blankets since outside it was getting very cold.


Never wanting to be lazy after two days of the bustle and high prices of Santiago on Monday I started another camino walking towards the sea at Finisterre. It felt great to be back in the more relaxed countryside once again; there locals take the time to say Hola, point out the route, and wish you Buen Camino.

However, the weather was not very relaxing with many drenching downpours over 22 km crossing the hills to Negreira where the albergue was quite busy with 18 pilgrims for 20 beds. One Dutch family on bikes included Grandma and a toddler traveling in his own little covered cart pulled behind his Daddy's bike. Much of their baggage was diapers!