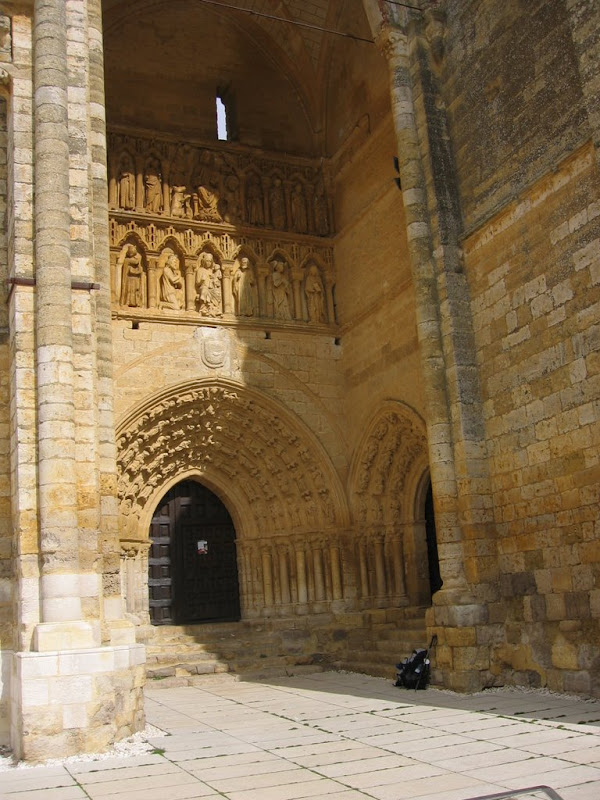 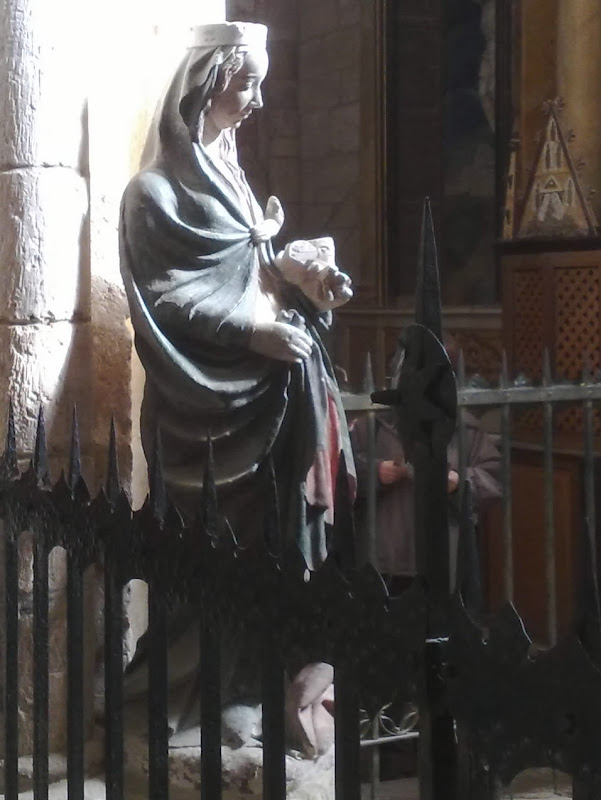 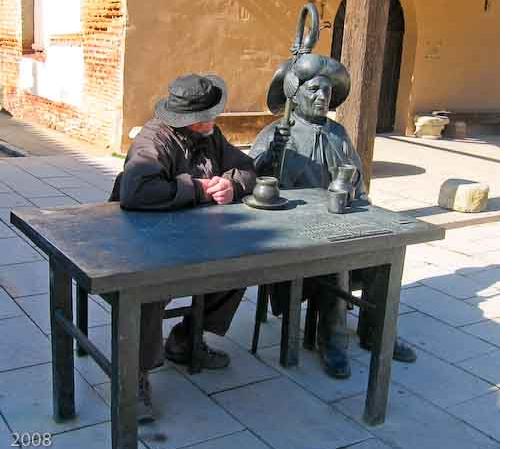 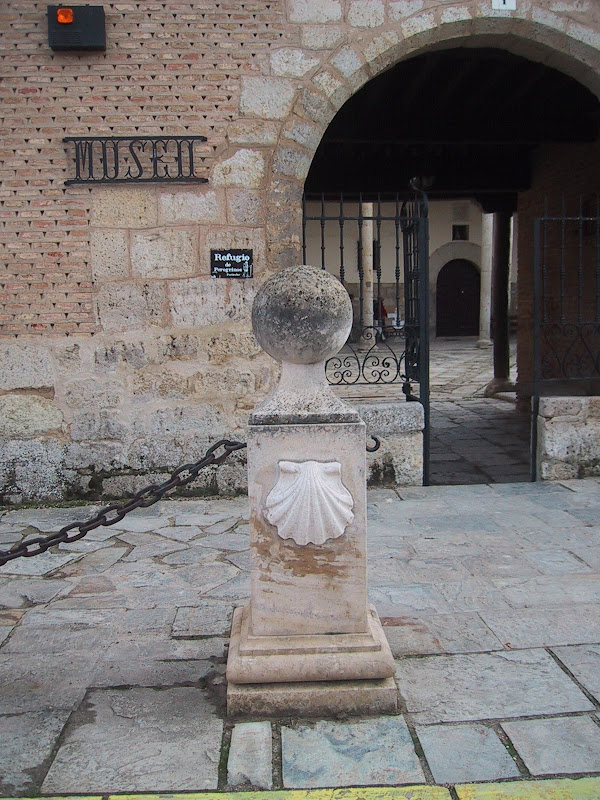 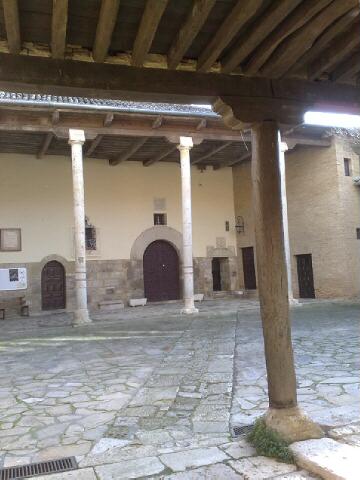 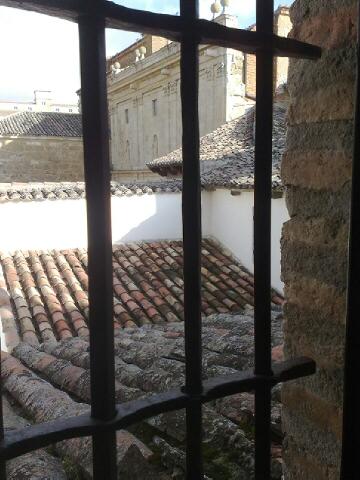 
Next day the Quebecoise and I covered 20 k. The Camino, flat and broad, paralleled the provincial road; low concrete posts or bollards decorated with ceramic shells marked the way. Mid morning we drank a welcome cup of tea at an outdoor café that had been set up in someone’s shed to service pilgrims. Non-traditional ad hoc structures such as this would occur more frequently along the trail from now on. If only one in every ten passing pilgrims bought something, the potential profit was still substantial. We stopped at Villalcazar de Sirga to visit the fortress-church, Santa Maria la Blanca. Massive and austere it had been built in the 13th century by the Knights Templar.

At Carrión de los Condes we stayed in the monastery of Santa Clara sharing a twin bedded room with clean sheets. What luxury! St Francis of Assisi during his pilgrimage to Santiago in the early 13th century is supposed to have stopped in the same monastery. The medieval city had been an important commercial and political center with more than seven pilgrim hospices.


Hiking was cold and tiring against strong wind in heavy rain; covering 20 k was an effort. Along the way several contemporary sculptures cleverly depicted pilgrims. At Carrión de los Condes we stayed in the same Clarist monastery as I had been in 2004. In one snug dorm besides S and myself were 2 guys, a young Japanese and an older Quebecois named B. We four shook hands and performed a type of ballet in order to squeeze between the bunks and knapsacks; wet hiking sox and woolly hats were draped all over. Space was really tight!

B seemed hyper-fastidious as he repeatedly rolled the items in his pack to get the fit just so and rechecked his guidebook. He asked if we had met any other Quebecois nearby. When I answered no he smiled and explained. When planning his pilgrimage an acquaintance named A had decided to join him. After one day and a half on the Camino walking together became impossible. Their styles were completely opposite; B was too intense and A extremely relaxed. They separated hoping to never cross paths!! …And so it goes.


I felt better today. Did 20k across flat countryside to Carrión de los Condes. Only the constant wind from the west was a problem. Stopped at Villalcazar de Sirga on the way, but the Templar church, Santa Maria la Blanca, was closed. Here in C dl C the 13th c Convent of Santa Clara were I stayed before is being renovated. Wandering about this historic town is always rewarding. Tonight I am in the snug parish albergue with a few other pilgrims. Now that March has arrived more pilgrims should be traveling.


We are in a very Catholic convent. All the other pilgrims are men. Walked only 12 km today under a very hot sun. Actually removed my jacket.

On the way Polo and I stopped at the Templers church at Villalcazar de Sirga. We also ate a wonderful lunch at an unforgettable restaurant called El Meson des Templiers. It has truly existed for centuries. Filled with antiques it appeared to be only a la carte and quite expensive. However, we sat four steps lower that the majority of the diners, ie. truly below the salt, and ate a copious and delicious pilgrim menu for 11 euros.

While walking I have come to the following guide lines for the Camino. You must consider the topography, the weather, your health, your pack, strength in difficulty as well as endurance. Will try to write more tomorrow.


Spending last night in the comfortable pension was a true rest. This morning Gerry and I continued meeting a German couple and a Danish girl 'en route'. The chill was brisk with thin ice on the puddles, but the blue sky was clear with milky sunshine. After 19 k we all arrived in Carrión de los Condes and are staying in the Espiritu Santo convent.

On the way at Villalcazar de Sirga the famous Templar church was closed. However another of my favorite Camino sculptures was in plain view in front of a restaurant. Here is a chubby life-sized pilgrim complete with shell, water-gourd and staff seated at a table set with plate and mug. Next to him is an empty seat for you the passing pilgrim. 'Buen Proveche/Bon Appetite!'