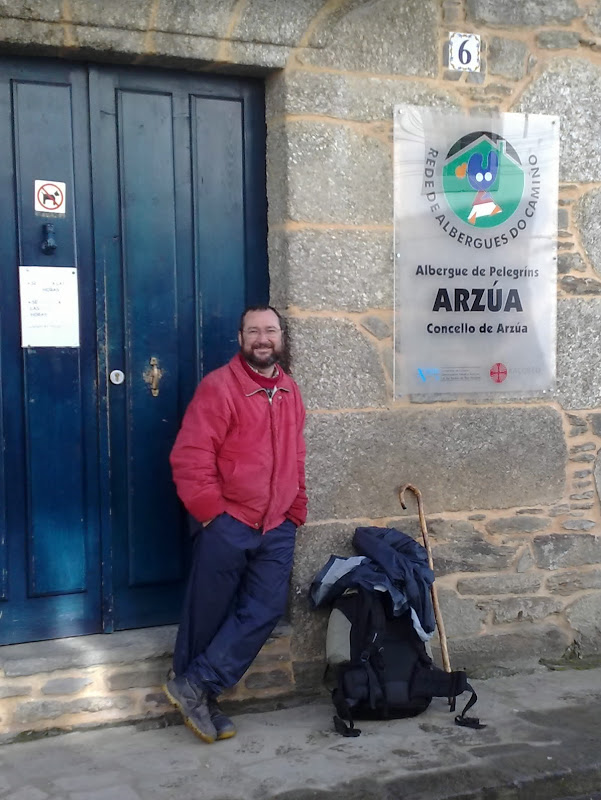 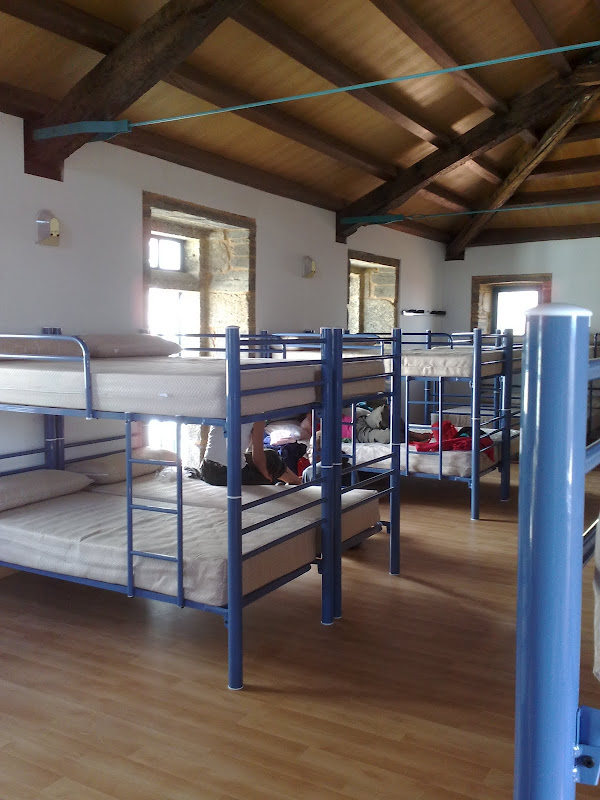 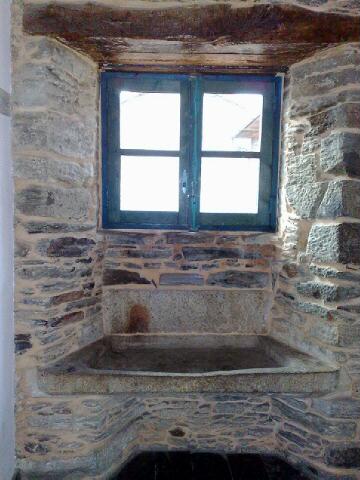 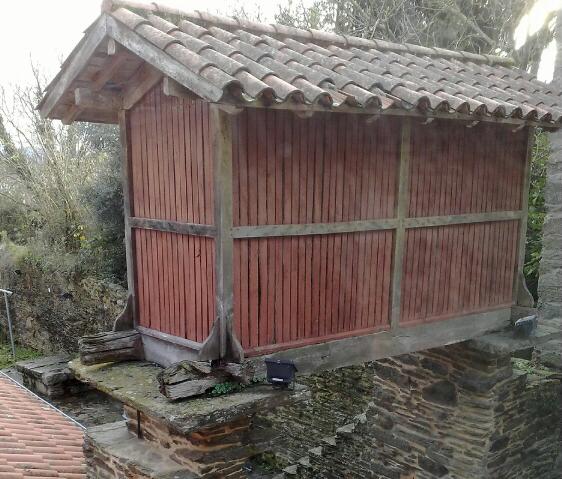 
On this stretch the Camino crossed several rivers and many villages. Eventually the low, stonewalls disappeared while fern and tall fragrant eucalyptus appeared. Near Coto I ate a delicious second breakfast in the patio of a chic, but friendly, casa rural. To my surprise a small van of tourists stopped and a few ‘Sunday pilgrims’ with walking sticks, but no packs, exited to walk for only an hour or two in order to sample the trail! Spotting my pack and shell they asked “How long have you been walking?” “Forty-eight days!” I answered. They were most impressed.

Near Leboreiro the Camino, part of the old Roman route linking Lugo to Astorga, was paved with big flat stones. Melide had a busy open market in the town center. Since the Atlantic coast was close pulpo or octopus was for sale everywhere, a Galician specialty. Jumping across stones to forge the river near Boente de Baixo was a bit difficult. However, a single-arched medieval bridge crossed the river at Ribadiso do Baixo. Nearby was the apparently closed, but handsomely restored, old pilgrim hospital, now an albergue. Tired I trudged on to Arzúa, a town famous for cheese shaped in cones. I found a small warm pension and ate in a bar across the street. Arriving at the end of lunch, about 6 pm, and exhausted, I was lucky to be served. Only 38 k to go!


The English three and I set off together. To escape from the drizzle we ate a picnic lunch huddled in a bus shelter. Eventually the landscape changed to tall eucalyptus groves and patches of fern. The path through these woods seemed much easier. After 15 k we stopped in Arzúa at the municipal albergue. A handsome old stone school it had been most attractively renovated. Our dorm had a cathedral ceiling, the wooden bunks were well designed and the new tiled showers had abundant hot water. Bliss! Although we were the first to arrive by night it was packed with pilgrims.


Did an easy 14 k walk through eucalyptus woods to Arzúa. Saw many primroses and violets blooming. Spring has truly arrived! Staying in the comfortable municipal albergue as usual. It is such a successful renovation of an old school: lots of old stone is handsomely combined with new slate. There are many pilgrims including an older Swiss guy who keeps muttering to himself.


We spent the night in Arzúa in a very nicely restored albergue remade from an old building.

There were only 7 of us including a new woman from Finland and young woman from Cameroon with her Spanish boyfriend. Both she and he are doctors but they had nothing to fix their own blisters. Twas ever thus.


It has been exceptionally hot for the past two days! Some pilgrims are wearing amazing combinations of clothing in order to cope, ie wet tee shirts as sun hats! This morning 2 German girls and I got up very early in order to be on the Camino by 8 am to try to escape the midday heat! What a difference from 2 months ago at St Jean Pied de Porte when all was still dark (and cold) at 8 in the morning!

Now the Camino has become a narrow forest path crossing numerous hills covered with endless groves of tall eucalyptus trees. At least there is some shade!

Tonight in the Arzúa albergue is very clean and comfortable. I have always enjoyed staying here; it is a most handsome rehabilitation. Best of all the showers are spacious, hot and spray you and not the walls! Bliss.


Today a guy from Seville, one of "my" group of long haul pilgrims, and I walked through forest to Arzúa. This handsome albergue with great showers has always been a comfortable favorite. What a surprise to have it quickly fill with a Spanish Marine brigade walking the final 100kms as a training exercise! Forty good looking guys, but with many blisters and lots of camouflage, are about the place; it should be a vibrant night!


Ever since last Sunday while slowly walking the last 100km to Santiago I have stayed in several small rural albergues. Slightly off the beaten track or at least not at one of the often published 'official' halts these are run by the ACAG, ie the government of Galicia. Very well maintained and generally found in recently renovated historic buildings with original details, interesting roofs/ceilings, good heat and hot showers. At 5€ per bunk they are a GREAT bargain.

My dorm for tonight in Azura; at last all is warm and comfy after a sodden forest slog in the almost constant rain from Melide. In both towns these ACAG albergues are gems! What BLISS it was to arrive, open the door and step into surrounding warmth when I was tired, wet and chilled! Now for a hot shower followed by a relaxing siesta.