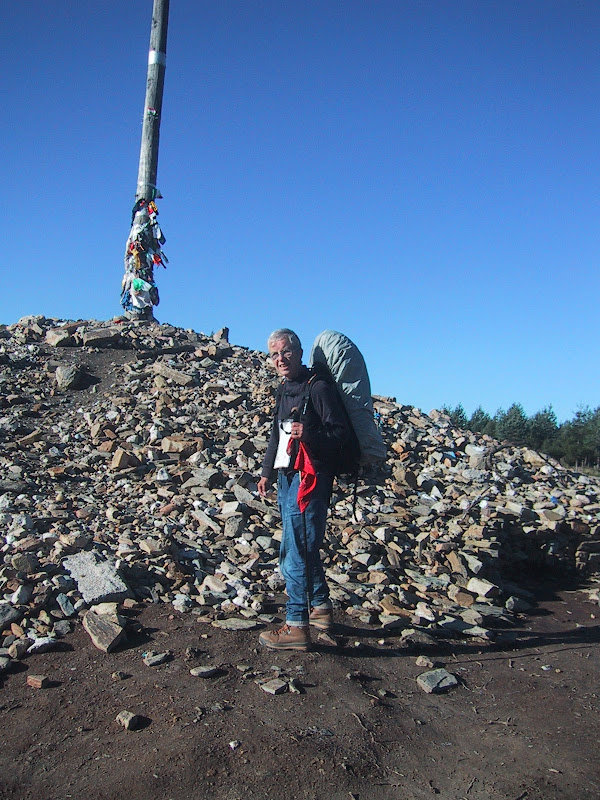 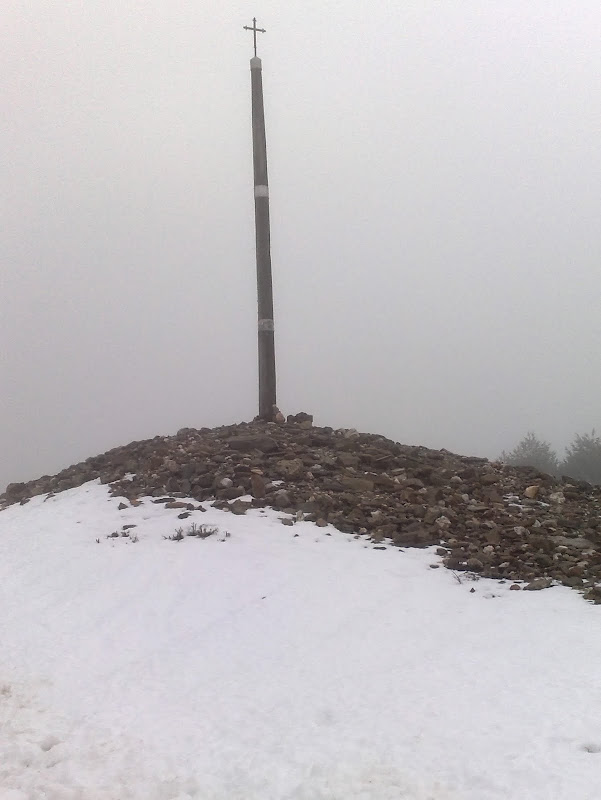 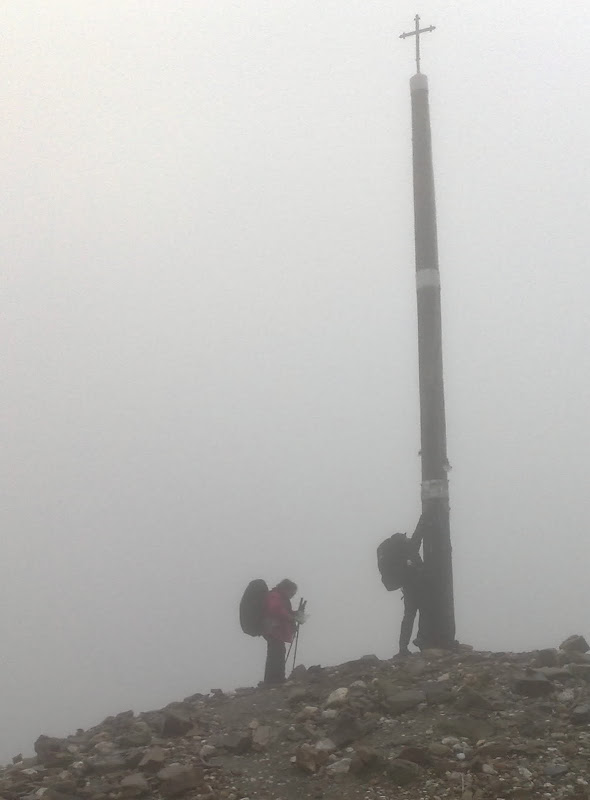 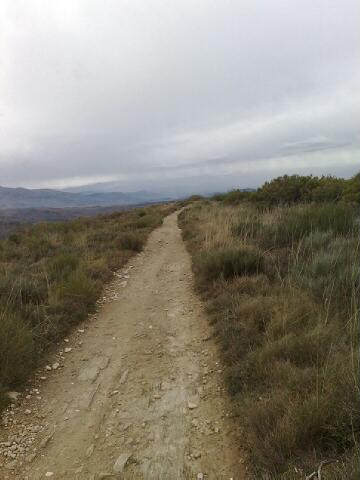 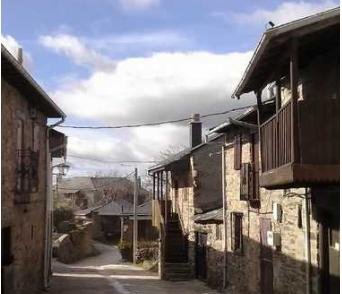 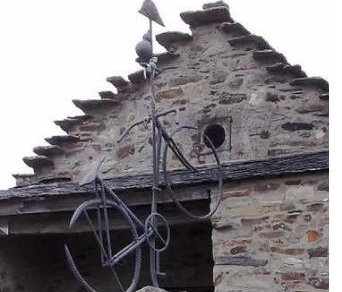 
Leaving Rabanal we passed a memorial to a Swiss pilgrim who had died on the Camino. The trail continued to climb; we were really in the mountains. It was cold, the sky pale gray-blue as we crossed oak forest, broom and heather. At Cruz de Ferro, altitude 1504 meters, there is a small iron cross atop a tall wooden pole rising from a huge stone cairn. By tradition pilgrims have placed a stone carried from home on the giant pile as they pass; I added mine from our garden in France. Unfortunately the area was rather dirty and depressing with plastic streamers tied to the base of the pole à la Tibet. Mirta and I continued to El Acebo. There was one single street, the Camino, in this picturesque mountain village. We stayed in a private refuge above a restaurant. The pilgrims’ menu was tasty and the vernacular architecture interesting with continuous balconies on the second stories, but the unheated refuge was frigid! It was so cold that it was hard to sleep.


At breakfast S said that he had telephoned the only albergue in Ponferrada and told the hospitalero to give me the air-expressed parcel. We said our goodbyes, kissed each other’s cheeks and he left. Alone I started climbing up the trail to cross the mountains.... It was a beautiful solitary trek of 17 k in brilliant sunshine beneath a vivid blue sky.

I paused at the mythic Cruz de Ferro. At 1504 meters this is considered the highest point on the Camino. Throughout time pilgrims have placed a stone carried from home at the base of the simple iron cross which tops a tall wooden stake. Pensively I added my stone to the giant cairn and hoped for the best for S and his mother. Thankful of my own great good luck in just being I further hoped to be able to cope with whatever life might bring. Ultreia! Early in the afternoon I stopped at a private albergue above a restaurant in El Acebo. After a hearty late lunch and welcome hot shower I simply rested. No other pilgrims appeared.


Did a nice walk alone of about 16 k over the mountains to El Acebo. The views from the top at 1504 meters were splendid. Stopped for tea at a new private albergue in the ruined village of Foncebadon. They have done a great job of rebuilding. Perhaps some year I'll stay there. At the Cruz de Ferro I threw a stone from home onto the immense pile. As pilgrims have done for centuries I too gave thanks and then wept. ... Now I am in another private albergue above a pleasant restaurant. Talked with a few Polish pilgrims. Tired, but rightly so.


We are now in El Acebo, high in the mountains. Today we crossed very atmospheric mountains in dense fog with a slight rain. At times there was snow on the ground. I tossed my stone from our garden at home onto the immense pile at the foot of the famous Cruz de Ferro or Cross of Iron. As usual I said my thanks for being able to walk and, as well, for Bill and my life together in France.

Stopped for a second breakfast on the way at a charming small albergue in Foncebadon which has recently been restored. Three years ago on Camino 2 it was a ruined stone house, now it is remade with, of all things, fittings from Ikea. Small world.

This is another charming mountain town with a welcome albergue connected to the only open bar-restaurant. There are 7 pilgrims here. Two non-communicative older Spanish women, one guy from Nantes, one guy from Brussels, another from Italy and Polo and myself. We had a very good lunch upon arrival at 4 pm, drenched from the weather and tired after crossing the mountain walking on many small stones.

Tomorrow it is on to Ponferrada. Another plus here is that the Internet is free if you sit at the bar. Hence I am typing while drinking a Coke.


Today Mayte and I finally left Foncebadon walking up the plowed, dry road to the mythic Cruz de Ferro. Giving thanks for being able to come this far, I tossed a stone carried from our French garden onto the immense pile at the base of the famous iron cross. Pilgrims have made this same gesture since the middle ages; today the scene resembled a medieval landscape painting with deep white snow covering the ground and thick white fog swirling above. ...All seemed timeless.

Now we are in El Acebo, a charming mountain village. Little has been 'gussied up'; much is authentic. Slate from the mountains covers the roofs; second floor porch galleries open onto the single street, the Camino. A friendy bar/restaurant, Meson El Acebo, has an albergue dorm upstairs. Eight other pilgrims are here tonight. Hope the heat works!


Heavy rain in the night resulted in a very sloppy path for leaving Rabanal at dawn Sunday; more rain while walking so I was soaked upon arrival at Foncebadon. Drank several hot teas at the same albergue, Monte Irago, where I sheltered 2 days from heavy snow during Camino 5. The hospitalero remembered me and that storm. Met a few young Spanish pilgrims who had begun walking at Astorga and were suffering from trying to walk too far too fast.

We all continued to the famous Cruz de Ferro or Iron Cross where as have pilgrims throughout time I threw my stone carried from home onto the mound and gave my thanks for getting so far. Near-by we crossed the highest spot on the Camino, 1439 meters.

Now I am snugly installed in a small private albergue over a bar in the mountain town of El Acebo after savoring a fresh trout stuffed with air-cured ham in butter sauce. Delicious! Other pilgrims included 3 Koreans, 1 Brazilian, 1 sick Australian, and a Polish photo-journalist with bad knees.

One basic problem is that most guidebooks divide the Camino into set stages which most novice pilgrims consider 'sacred'. As long as accommodation is available everyone should walk the distance that feels most comfortable. For me now that distance is roughly 20/22 kms per day.


The fog continued as I passed the mythic Cruz de Ferro or Iron Cross where for centuries countless pilgrims while saying a silent prayer have left a stone carried from home. So did I. Tired after crossing fog wrapped Monte Irago, the highest point on the Camino Frances, I eventually arrived at El Acebo, a picturesque mountain village where the single street is the Camino. Weary and wet it was great to stop at the simple albergue atop the bar/restaurant, Le Meson El Acebo, where once again the staff remembered me. As always the welcome and food were great!


For the past week or so ever since leaving the sprawl of Leon the Camino Frances has been crossing open tracts of rural land. Often planted with sugar beet, corn and winter wheat, or forested with pine, oak and giant fern these great spaces have been ideal for solitary walking and silent philosophizing. In the chill late autumn air all non essentials are hewn away; to paraphrase Descartes I walk, therefore, I am. ...

Once again the camino is crossing high mountains. Unlike my difficulties climbing the windswept Ibaneta pass that first exhausting day in the Pyrenees almost six weeks ago today I easily walked up Mont Irago which is supposedly the highest point on the entire Camino Frances. Such relative ease is positive proof of my newly acquired greater strength. Long may it last!

Now on the 'other' side of Mont Irago I am in the tiny picturesque mountain village of El Acebo. The camino is the main street. Upper floor balconies provide exterior storage or drying space above any winter snow. Although it is COLD here tonight I sincerely doubt that it will snow.