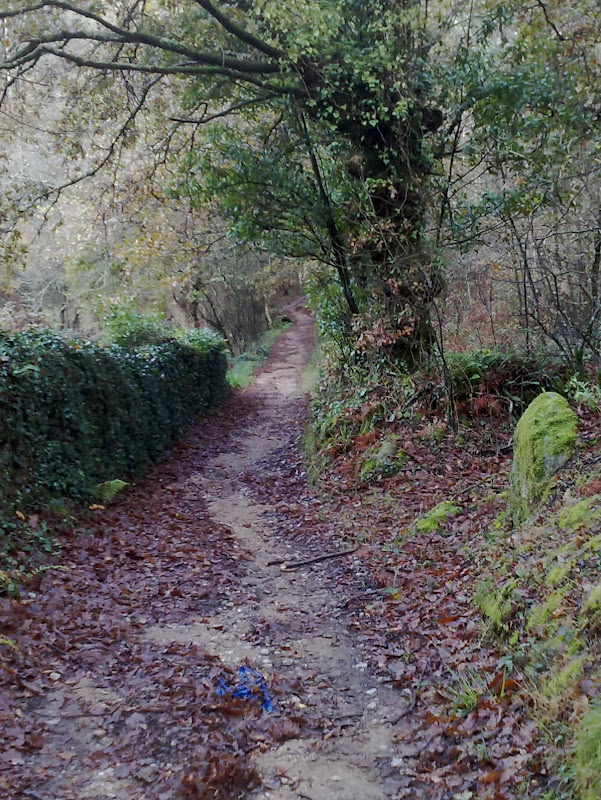 
During the night the wind howled and rain lashed the windows. In the morning the hospitalero, who lived next-door, suggested that we could stay the day and another night. However, we trekked on. All day the heavy rain was incessant; at times we walked through streaming water and not on a trail! It was a hard slog of 11 k to Vilaserio where an old school was under renovation for use as an albergue. New windows had been installed across the façade; they all leaked! On the interior were numerous puddles; it was damp and very cold! Cath slipped in water on the stairs, but thankfully was unhurt. On a portable burner Tony and Rob cooked something hot for us to eat. In order to sleep I wore all my dry clothes including a woolly hat!


Anita and I continued crossing the cold, bleak forest landscape to Vilaserio where we stayed in an old school which is now a minimal albergue. (The only alternative was to walk 20km further to the next accommodation.) The school had a toilet, shower, floor mattresses and NO heat! Outside it was sleeting; inside on tile floors the constant cold was hardly bearable! Of course I wore my woolly hat plus gloves to try to sleep, but there was no relief. Frankly I am surprised that we even made it through the night! By dawn a thin layer of treacherous ice stretched to the horizon outside.


Tueday through more rain and mud I walked on to Vilaserio which always seems extremely remote. Since last year it was bitter cold in the old school used as a temporary municipal shelter, this year I chose a new private albergue which had many blankets but no heat where I was the only pilgrim. Nevertheless I put my sleeping bag within a folded blanket and slept snugly for 15 hours; I was pooped!