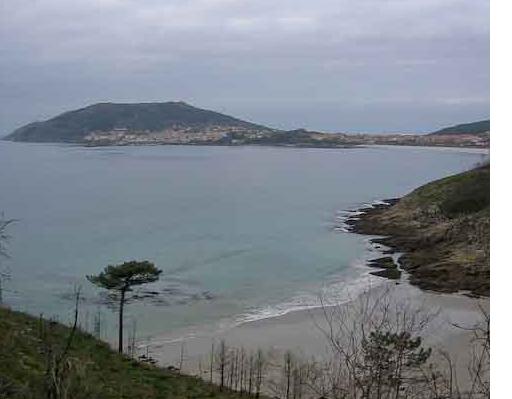 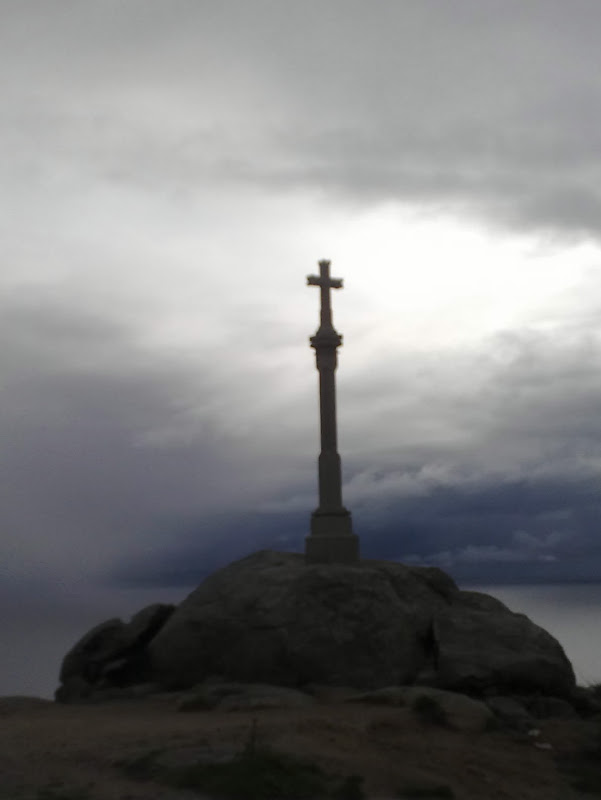 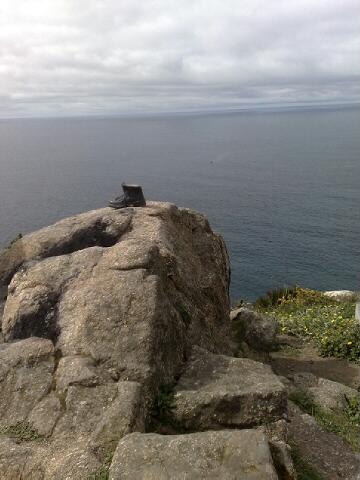 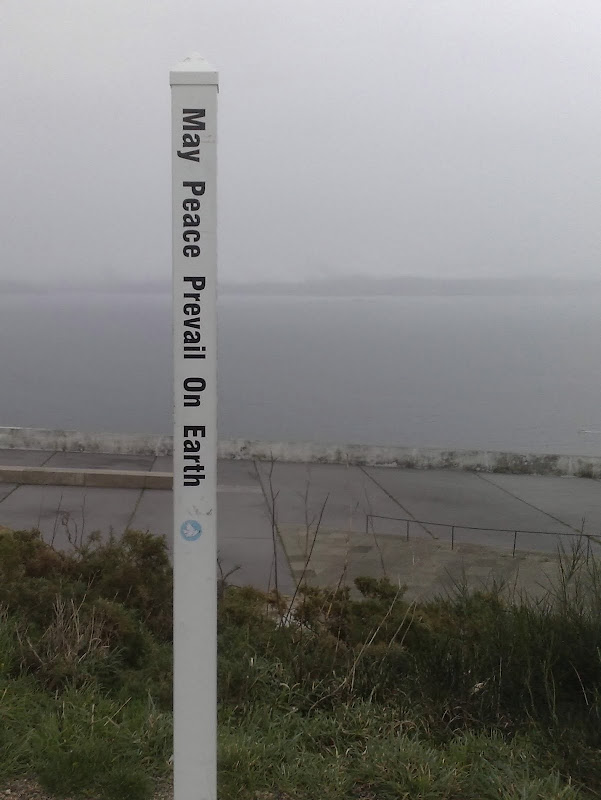 
During the night from exhaustion, cold, wet or whatever Cath and I were both sick. I felt dreadful! Nevertheless it was only 8 k more. Since the rain had stopped we four went on.

The sun grew warmer and the air smelled salty. Along the way we had views of the last land, the end of the world! Walkers out for a simple Sunday stroll went past. Sand dunes and beach bordered the final stretch of the trail; fishing boats bobbed in the harbor. At last in Finisterre we stopped by the waterside antique cross and hugged each other! Eureka! I closed my eyes in silent thanks. All afternoon I sat by the sea deep in contemplation. …Much later when the albergue opened we obtained our certificates and Rob and I shared a final dish of pasta.

Waking up in the morning it was almost impossible to believe that this was, indeed, the end of the trail. After a rather jolly breakfast we four took a slow bus back to Santiago de Compostela. It felt wonderful to travel seated! Once back in town we walked to the railroad station, checked schedule times and suddenly had to say goodbye. We hugged, kissed each other’s cheeks and departed.


Trail's end! In hazy sunshine I walked alone the last 8k along the shore to Finisterre. Went out to the lighthouse at 'the edge of the world'. On the great barren rocks by the boot sculpture I sat in the wind watching the sea, silently gave thanks and wept.

As always I loved the journey...


I walked across the beaches towards Finisterre, where the world was thought to end before Columbus. Crying as I walked at last I reached the westernmost lighthouse in Europe and the now famous Camino marker of kilometer 0.

Overcome with emotion I continued to the rocks behind the light and watched the horizon. The sea was the color of pewter and the clouds above dove gray. Only the faintest line separated the two. I sat for a long time, gave my thanks and then slowly walked backed to the albergue....

Ultreia, my camino was over.

I like to think of all pilgrims as parts of continuous ribbon stretching back into the middle ages. Some of us are visible, but most are not. However in our minds and hearts we all have been changed by the journey. Long may such impressions last!...


Since Monday, March 23, I have been slowly walking towards the sea and today reached lands end at Finisterre, kilometer 0. The weather continues to be magnificent and there have been several new long distance walkers.

Mentally I was saying adieu to 'my' Camino. This week each step taken, each hill climbed was very special for being close to the last.

Going along I silently gave thanks for all that has passed during these nine weeks of walking; for my own extraordinary good luck, growing strength and intense determination to endure, for strangers' gracious offers of help and other kindnesses, and for fellow pilgrims' shared conversations and meals. What a mixture!

Of course I hope for another Camino in 2010 (during my 71st year!), but if that can not be at least these precious memories shall endure as long as I. ...


Yesterday, Saturday, I walked alone the last kilometers down into Finisterre and out to the lighthouse. The rain was cold, the wind was brutal and the surf rough, but it was wonderful to feel alive! Here the land's end was my journey's end.

By the old stone cross near the marker for kilometer 0 while looking out to sea, I offered heartfelt thanks for life, for strength, and for determination to have successfully walked all these thousand kilometers. ...Weeping I wondered about other journeys yet to be.


Today just after dawn I walked alone the final kilometers along the sea to Finisterre. Rain and tears were pouring down when I finally reached kilometer 0 at the old iron cross by the famous lighthouse. Yet nearby the sky cleared for a bit at the new marker for peace.

Since there at land's end my 7th Camino ended after 1000 kilometers and nine weeks walking, silently I gave my heartfelt thanks for all that has been and for all that have helped to make it so. Indeed, thanks for the memories!