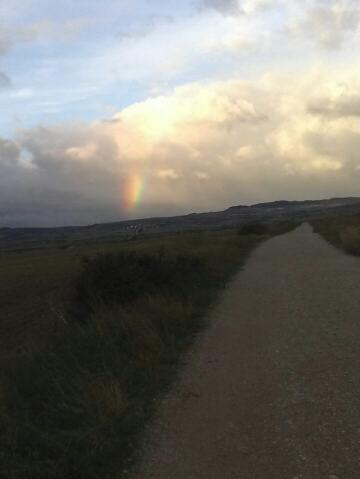 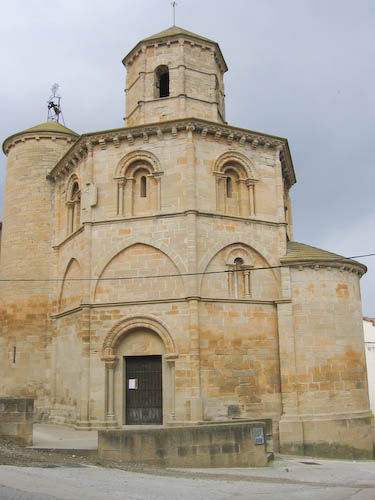 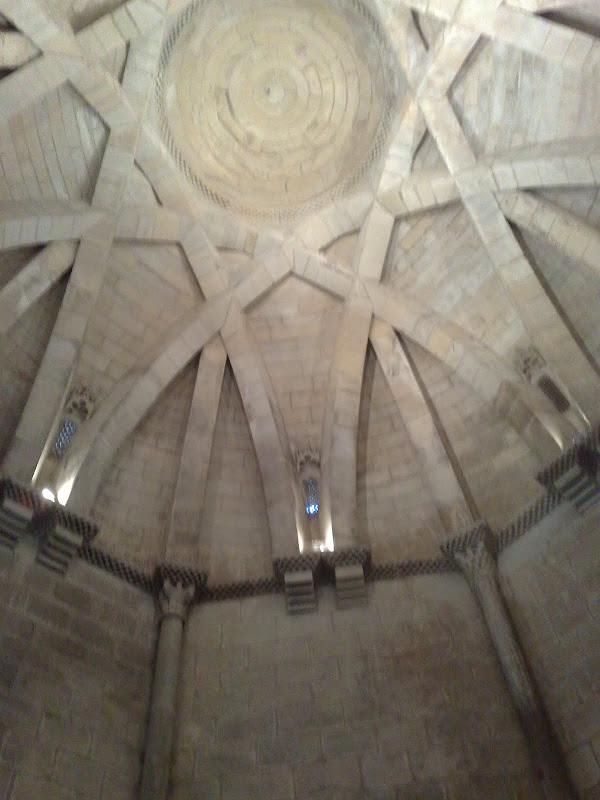 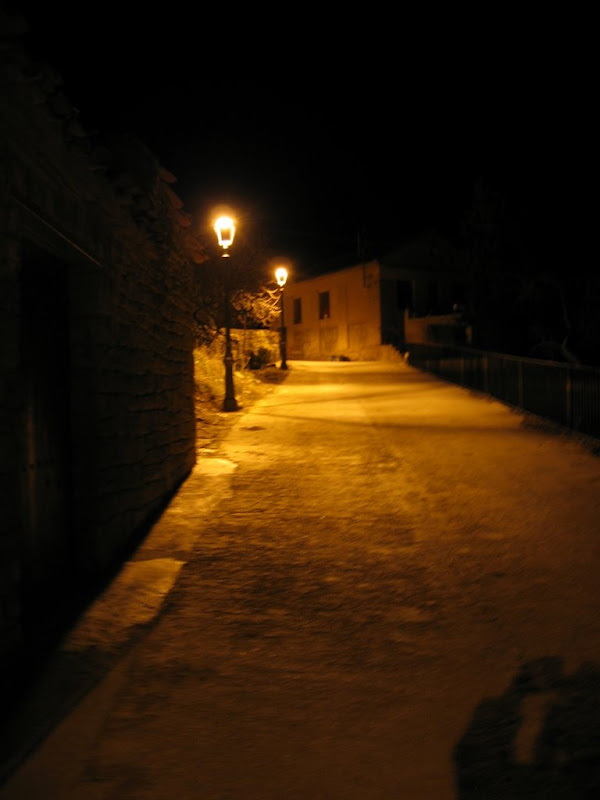 
After 10 k through more vineyards, but beneath a deep blue sky, came Torres del Rio. Here is found a small octagonal Romanesque church, Santo Sepulcro. Some historians link it to the Knights Templar who protected the Holy Sepulcher in Jerusalem; others link it to the nearby monastery at Irache. Whatever, it is a small gem. Looking up into the ceiling of the central cupola crossed by ribbed vaults which form eight-sided stars was mesmerizing. I stayed in a pleasant private albergue built around an open patio. Using the sanitary facilities entailed going down two flights of stairs and crossing the patio; it was chilly and cumbersome in the night.


Unfortunately, the good weather changed to heavy rain and the exposed trail became thick, slippery mud. I slid, lost balance and fell. There would be no shelter for 7 k. Bedraggled in my mud-splashed poncho at last I limped the hilltop hamlet of Sansol. There were no facilities but a kind woman leaned out her kitchen window and offered a steaming cup of café con leche. Delicious! At the cold municipal albergue at Torres del Rio four other pilgrims and I tried to dry out, get warm and relax. It was difficult. The rain continued and the toilets were Turkish. For comfort it was not too great. Eventually we five visited the splendid church. Octagonal like Eunate it too is associated with the Knights Templer. Since the albergue had no kitchen and the only restaurant in town was closed, the houseparents offered to cook us dinner in their nearby house if we paid for the food. We did!


Niki and I had an easy walk in lovely sunshine to Torres del Rio. We are staying in the same private albergue, Casa Maria, as I did in in 2004. It is a comfortable place with only one drawback. The showers and toilets, although modern and clean, are located outside off the open patio! Hence any night use will be a bit complicated. We had a nice lazy day with a long siesta after a couple of beers. An evening stroll finished our day.


Am in Torres del Rio with a nice circular church based on the Holy Sepulcher in Jerusalem. Easy short walk today across orange earth and vineyards under cloud cover.

Tonight two sweaty adult Spanish men have joined Polo and me. The Spanish speak French and are charming. We all are washing clothes together in the machine. The only problem with this place is that the toilets are on the outside patio. Needless to say I hope that I do not get the trots.

I feel better and better each day. Hopefully all will stay that way for the next 7 weeks. Everyone find my name Marguerite a riot. Since they remember the famous cow of that name wearing a floppy straw hat, with cutouts for its ears, dragged along by Fernandel in old French movies. I must get a straw hat. Not sure about the cutouts though.


The weather changed drastically from yesterday. The sky was pewter and threatening rain. However I quickly walked the few kilometers to Torres del Rio while remembering the time when I slipped in the mud and drastically hurt my knee.

Torres which is a picturesque hill town has a wonderful circular Romanesque church similar to Eunate. At night the church is beautifully illuminated.

The municipal albergue is closed so I am in a homey private one, Casa Maria. The loos and showers are outside on the patio so it better not rain. There are five other pilgrims; two girls only going as far as Logrono, a Polish guy, and a Canadian couple. We are all squeezed into three bunk beds in a small dorm. At least we will keep each other warm!