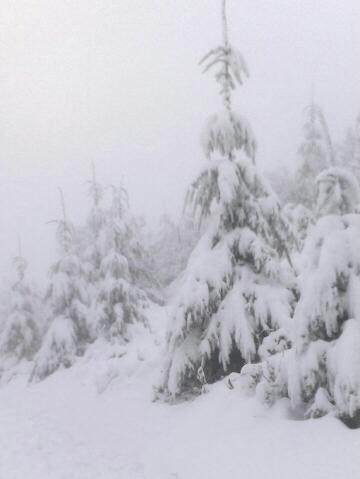 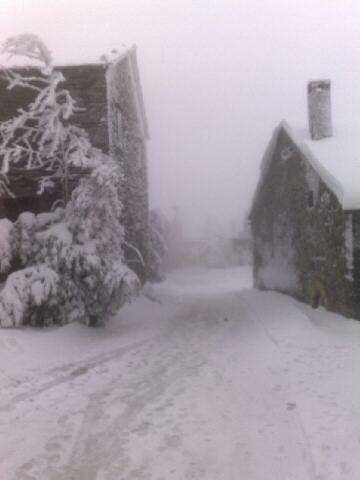 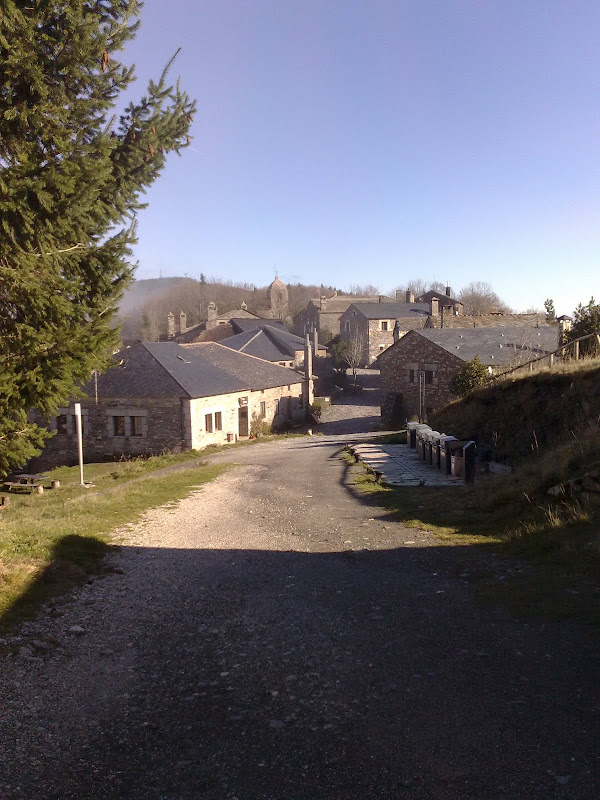 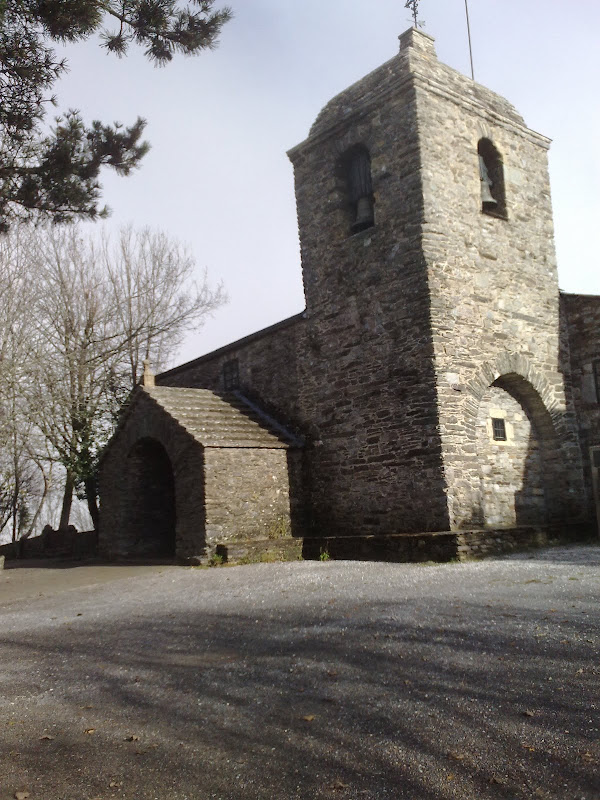 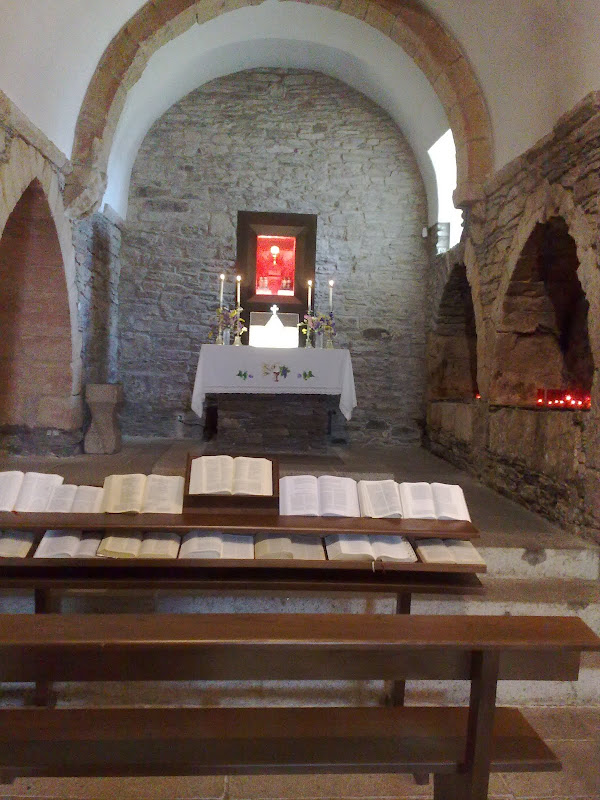 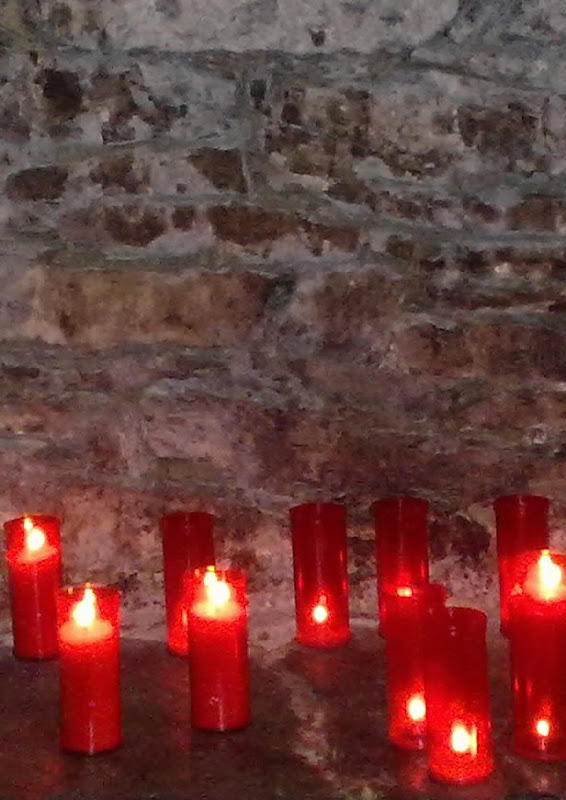 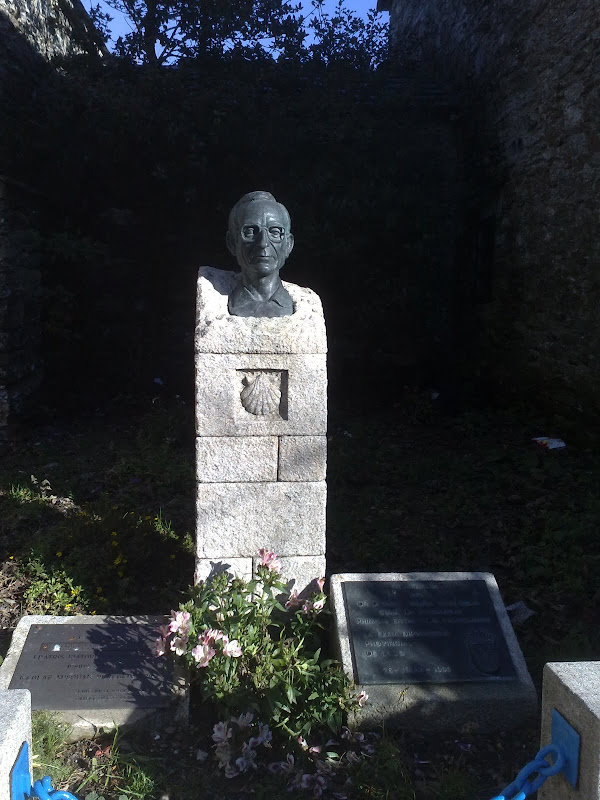 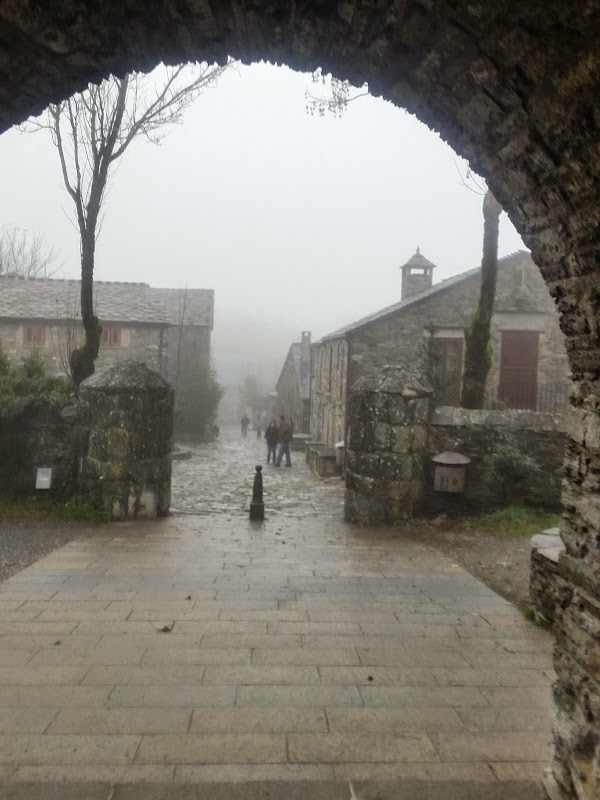 
Weakened, but resolute, I was determined to continue. Mirta shared her supply of Imodium medicine, the housefather sent our packs to the next stop, and we set out. Unfortunately after walking 10 k to Trabedelo I was ill again. Luckily there was an open café; the waiter/owner called a friend and we were ‘taxied’ up to O Cebreiro. Mirta went to the municipal albergue and I found a room above a bar. Heated with private facilities, it was bliss. I thought I might stay forever. After a bath and long nap we met again for soup and a brief look about ‘town’.

The hamlet is very picturesque composed of a pre-Romanesque church and a handful of granite buildings. Some structures, pallozas, have straw roofs.

The weather was cold, but glorious with blue sky, bright sun and from the 1300 meters altitude wide views west across the next region, Galicia.


In the morning since all was slick with sleet and snow I decided to follow an old logging road and not the trail. Higher and higher I climbed in the cold air; wet snow and heavy sleet blew across the route. I could hardly see. Soaked and freezing after 9 k at last I reached the tiny hamlet of O Cebreiro on the mountaintop, altitude 1300 m. The few dark structures appeared to be shut. Afraid of hypothermia I quickly changed into dry clothes sheltered by the church entrance porch.

This special place is associated with a medieval miracle when the sacramental wine and bread actually became blood and flesh. Within the dark granite Romanesque interior many small red candles were flickering; a few parishioners entered for Sunday mass. Overcome with emotion I sat in the back of the nave and silently gave thanks. Later after lunch in the original medieval pilgrim hostel, which today is a restaurant, I went to the new albergue run by the region of Galicia.


Yesterday we climbed up about 15 km on the old road to O Cebreiro. The sun was shining but the wind was cold. As usual I found the arrival there overwhelming. The little church is kept spotless. I sat for a while alone and offered my thanks.

Polo and I plus a handful of noisy Spanish guys and 2 young German girls spent the night in the recently refurbished albergue. It was very comfortable and now looks great. At 3 euros for a bed with good heat and great new showers it was a true bargain. We ate a very good dinner in the local restaurant.


After breakfast today Mayte and I began the long, hard walk up to O Cebriero. It took us about 6 hours to arrive at the top. What a view! I believe we could even glimpse the distant sea.

Long ago I realized that the usual footpath was far too steep for me, so I walk on the old N VI highway. It is longer, but a gentler way. However, I always wear my backpack while many pilgrims send their pack up in a taxi. To each his own! What matters is to DO IT!

This is another mystic and mythic stop on the Camino. During the middle ages due to the strong faith of one simple parishioner the wine and bread of the mass are said to have truly changed into Christ's blood and flesh. The church became famous and royalty sent priceless gifts. Today this small church is kept immaculate; it and the tiny village form a protected historic site.

Late last century a recent priest, Elias Valiña, was one of the three religious 're-founders' of the Camino. He is buried in the adjacent cemetery; many plaques and stones commemorate him and his work.

As I write sitting in the almost luxurious comfort of this newly renovated albergue the stars are shining above the mountains, mountains which Valiña deeply loved.
How and what might he feel in summer when hoards of casual tourists tramp along 'his' path?


Leaving the peace of Ruitelan I walked alone through timeless mists to O Cebreiro. Slowly following the old NVI route and not the actual Camino mountain path, after climbing 4 1/2 hours there at last was the tiny stone chapel and the little hamlet almost hidden in the dense fog mixed with sleet; one could easily imagine all the phantoms from the past close-by.

After paying my respects at the tomb of Elias Valiña, the local priest who mid twentieth century renovated the idea of the Camino and painted the first yellow arrows, I offered my thanks for coming so far inside the church. It is always kept spotless by his relatives who live near-by.

Then I took the first bunk at the albergue; by night the dorm was crowded with fifty pilgrims and NOT very comfortable due to the mob. Since this is a famous spot and the frontier of Galicia many pilgrims with limited time choose to begin here.


After the steep climb up the mountain to the village of O Cebreiro traces of other miracles both past and recent could be felt. Arriving at last and entering the tiny Romanesque church is always memorable. The magnificent silver chalice commemorates the famous Medival miracle of faith when a parishioner saw the transformation of wine and bread into blood and flesh. Outside in the garden more contemporary panels commemorate the visionary work of the 20th century local priest Elias Valinas Sampiedro who recreated the idea of the camino with its network of supporting albergues and even painted the now famous first yellow arrows which mark our way. ...Never underestimate the strength of personal conviction!


Ever since El Acebo I have been thinking about the rigor of this last mountainous stretch of the Camino. However today really takes the cake. Or to be more exact today is the frosting on the cake.

Trudging down to Ponferrada early Monday, then up to Villafranca Tuesday and on to Ruitelan yesterday were three hard tiring slogs across multitudes of vineyards and in varied weather mixing brief sunshine with icy rain. Each afternoon it was a great relief to arrive at an open albergue and settle down for the night.

Last night at the wonderful cozy albergue in Ruitelan we twelve pilgrims were worried regarding the weather forecast of heavy snow for today since all would be climbing up to the mythic village of O Cebreiro. This morning Carlos, the ever gracious hospitalero, told us not to walk the snowy camino but to follow the bike path along a plowed back road. Slowly we all set off. Luckily for me, Boris, a sturdy pilgrim from ex-Yugoslavia now in Germany working as a personal guard for celebrities walked with me. Perhaps Carlos had asked him to do so; perhaps it was just serendipity.

Up we slowly climbed on dry road to begin, then a bit of snow, then deep snow and total white out. Huge pines shaggy with snow resembled grotesque phantoms from some fairy tale. After four hours climb there was a low stone wall - civilization at last! We had arrived. ...I shall always remember our walk and how comforting it was to have a guardian angel.


Trudging down to Ponferrada early Tuesday, up to Villafranca on Wednesday, to Ruitelan Thursday and then up to the mythic village of O Cebreiro today were four HARD tiring slogs across multitudes of vineyards in dazzling sunshine. I feel rehewn. Each afternoon it was a GREAT relief to arrive at my destination, eat, shower and finally settle down for the night.

Today within 5 hours I climbed up to O Cebreiro by following a combination of both the bicycle route and the footpath. Of course this was a BIG effort, but successful! Tears of joy streamed down my cheeks when at last I entered the tiny village church. Legends and the history of this very special spot were mixed in my thoughts along with sincere personal thanks for having made it so far. Indeed, I was overwhelmed.


Most pilgrims who follow the camino sense the past as we tread where the saints have trod pondering how many feet have walked across the centuries. For me this sensation is most prevalent in the silence of the mountains. Nevertheless the camino remains vibrantly alive with contemporary life. Hence one walks with memory but ever conscious of present realities of weather, hunger, pain or exaltation.

Such was the many leveled mix at the mystic and mythic mountain hamlet of O Cebreiro. All was wrapped in fog and heavy rain. The church interior as always was calm and immaculate. I paused at the grave of Elias Valina Sampedro the local priest well known for much historic camino research and for painting the first yellow arrows late last century which we all so diligently follow; later I ate in the small cafe owned by his relatives.

Few pilgrims walked by; that night we were only four in the refurbished and well-heated municipal albergue. On the wall was a small poster noting a lecture series to commemorate the 25th anniversary this December of the death of Elias Valina Sampedro; in fact a lecture would be held next day in nearby Samos. ...Thus time passes but memories both personal and collective remain; history continues as long as we remember.