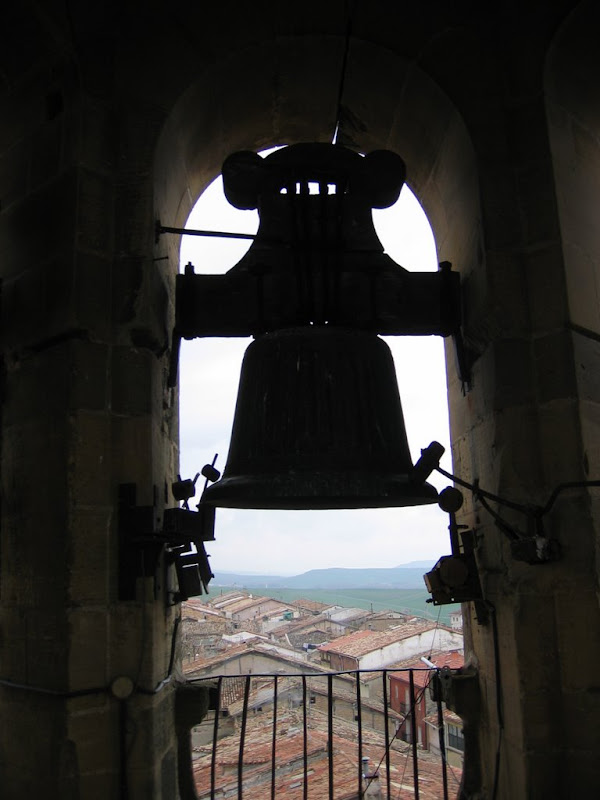 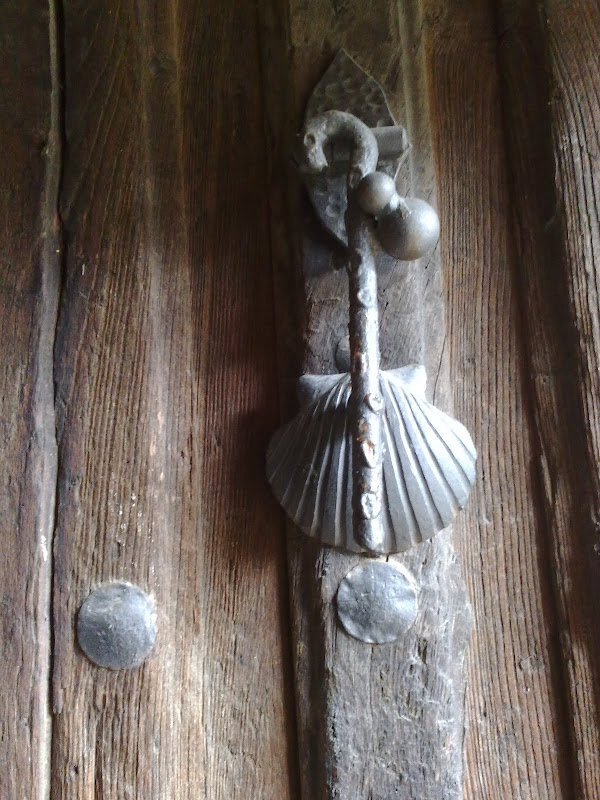 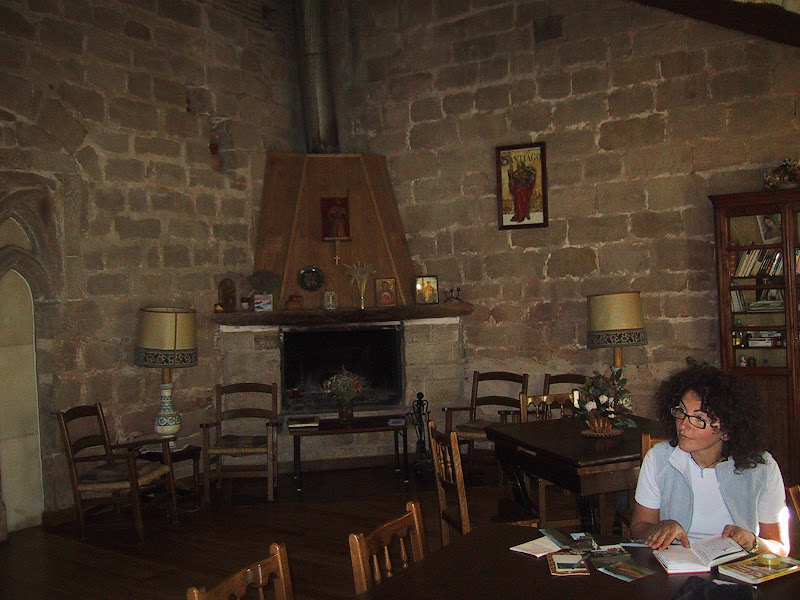 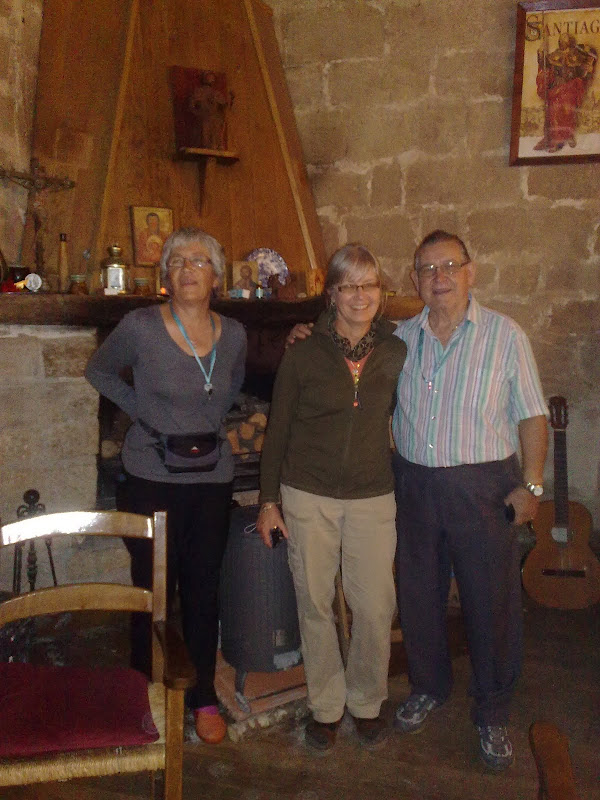 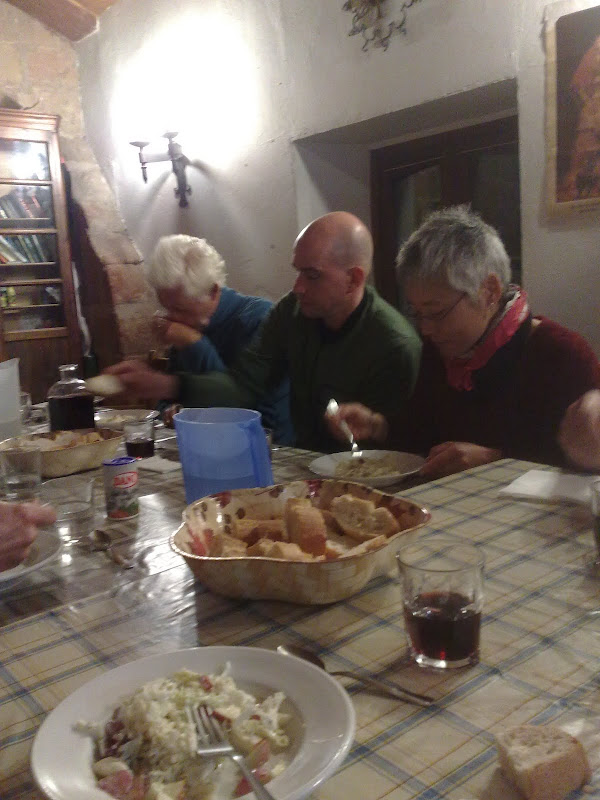 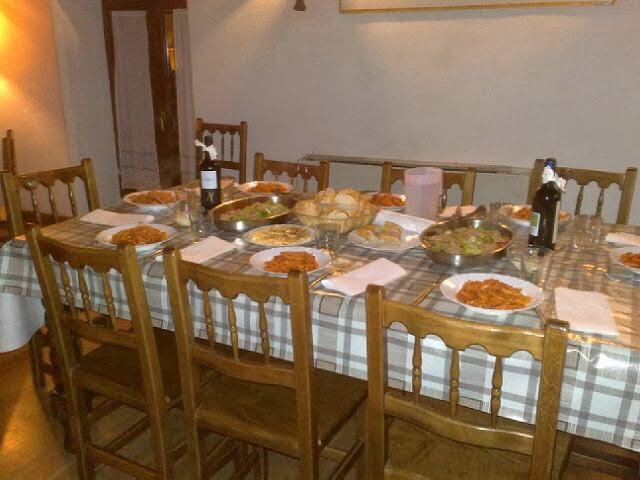 
Trudging across an ocher landscape of cut wheat beneath a heavy sky and against a biting wind I walked only 6 k to Grañón. I’m so glad that I stopped! The municipal albergue, in the belfry of the church of San Juan Bautista, was special. Open all day its sign read “Welcome pilgrim make this your home”. The handsome common room had a fireplace and comfortable furnishing. Above on a continuous platform were mats for sleeping bags. Kitchen and toilets were new and well equipped. One could really relax. What a surprise to discover that the gracious houseparents were volunteers from California! In the early evening we all attended mass downstairs. The magnificent wall size 16th century retable behind the altar shone with gilt. Later the gregarious priest joined us pilgrims upstairs for dinner. Townspeople brought in extra food. Authenticity, honesty and true ‘caritas’ made Grañón unique.


While revisiting the famous Santo Domingo cathedral I heard the chickens crow! Within the sanctuary a live cock and hen are kept in a Gothic coop in memory of a local legend involving a pilgrim and an innkeeper’s daughter. Other visitors not acquainted with the legend were shocked as the farmyard call broke the religious silence!

The 6 k morning walk to Grañón was cold, gray and slightly slippery as light snow began to fall. Fondly remembering my 2004 stop I arrived at the parish albergue. Installed within a church tower and always open, it is a special place. In the gloom I mounted the winding stairs. The sign still read “Welcome pilgrim make this your home”. The handsome common room, large fireplace and sleeping loft appeared the same.

No one was about. I made tea, took a hot shower, and listened to the wind now howling outside. At Spanish lunchtime around 3 pm. the hospitalero, a Cuban émigré, appeared. He and another workman were trying to repaint the church interior. Unfortunately the paint was starting to freeze! We three shared a great lunch and much later, huddled next to the blazing fire, dinner. Elsewhere it was really cold.


After visiting the cathedral and hearing once again the famous chickens I walked an easy 6 k to Grañón. This albergue within a tower of the church of San Juan Bautista is a remarkable stop. The door is always open with a sign which reads "Welcome pilgrim,make this your home".Each time I am here I want to stay forever! With the priest I climbed onto the roof to see the wide view. Tonight there are 3 other pilgrims and a French hospitalero. We shared a generous multicourse supper and sat talking together by the blazing fire as it rained outside. Just before bedtime all attended a prayer service in the church. The Romanesque baptismal font was gently lit while behind the altar the magnificent 16th century gilded retable was glowing. ... Truly memorable.


It was a short walk to the wonderful albergue in the church at Grañón. As always the welcome was most gracious. Besides Polo and myself, there were a two Swiss guys and a young Canadian couple as pilgrims. The house father was a young Spanish guy, polyglot in several languages. His girlfriend was Latvian. Quite a mix. They cooked us a wonderful supper. What a treat it was to sit by the blazing fire and be warm. As always the ambiance was perfect and we all realized it.


Last night in Santo Domingo after I crawled into my sleeping bag in the dorm I had to get out and move due to the incessant LOUD snores of the Spanish guy. What a racket! In desperation I slept on the floor of the 'dining' room. It was wonderfully silent until the chickens crowed before dawn!

Today was a rest day with only a short walk of 6 k to Grañón. It is always a pleasure to arrive at this albergue! The hospitality is authentic although the hospitaleros change. The sign at the door simply reads 'Welcome pilgrim, make this your home'.

The handsomely renovated space is set within one of the church towers. A fireplace has even been installed. All is very relaxing. Delicious meals are offered by the hospitaleros. Although the only pilgrim I was joined at both lunch and dinner by two workers who are restoring the church interior.

Lack of heat is the only problem! We all ate dinner wearing our coats. Now I will again wear my woolly hat to bed, or, to be precise, to mat. Here pilgrims sleep on mats on the floor of an added mezanine.

Alone for the first few hours in the Granon municipal albergue which is always open and located within a church tower, neither any hospitalero nor other pilgrim was about. By late afternoon, however, all was bouncing. Twenty-five pilgrims shared chatter, music, and dinner. Some had traveled a very long way including one couple from Poland and two young men from Israel who were remarkable musicians.

After dinner a short prayer service was held in the adjacent church; the magnificent baroque retable or altar screen was lit; all was golden. Now after such a glorious vision we pilgrims all have gone to bed or more accurately to floor mat and the cosmopolitan snoring has just begun!!


The earth is no longer the rich red of earlier lush vineyards, but is now a dry brown used for basic crops like wheat; jagged mountains cross the distant horizon; space seems vast and bleak.

In the same way that you may discern these contrasts between lush and basic landscapes, one can also note two distinct approaches to helping pilgrims. For example at Santa Domingo de la Calzada where the oldest existent pilgrim confraternity runs the recently enlarged albergue, the reception was brisk, banal and remote. All was similar to an airport check-in; nothing was gracious.

Such cool austerity contrasts greatly with the overwhelming kindness always felt at nearby Granon. Here everything is done to make each pilgrim feel at home. The hospitaleros are always warm and helpful while the communal meals are most pleasant. This is authentic caritas. Long may it last.


Tonight I am in Granon where the albergue within the church tower has ALWAYS been a special halt and it was again VERY special last night. Two extrovert male hospitaleros; one Spanish from Sevile, one Italian from Trieste were both GREAT chefs. Arriving early and quickly choosing a mattress for use on the balcony floor I then was kindly invited to share their authentic spaghetti carbonara for lunch. We three spoke no common language but easily communicated thanks to several glasses of vino tinto!

By dusk only two other pilgrims had arrived; both were also women of a 'certain age'. Hence we quickly dubbed ourselves 'the three grandmothers'. Prior to evening mass there was a brief trick or treat visit by local young Halloween spooks complete with masks and costumes but three days late! We all attended evening mass and thus were able to see lit the extraordinary Baroque retable or altar screen. The gracioua priest then joined the hospitaleros and grandmothers for a leisurely dinner at the albergue. All was special and offered to us pilgrims in the spirit of true caritas.

...Indeed all at Granon was and will remain memorable for me.


After the hustle and bustle of the Santo Domingo albergue which included a Swiss pilgrim who in a stupor fell from his top bunk as well as pelitons of Korean bikers dashing to Santiago it was, as always, most special to for me to enter once again the door of the Granon parish albergue and share the welcoming cozy intimate comfort.

We seven pilgrims relaxed, rested and reflected together; we also ATE quantities of delicious food lovingly prepared by our gracious host. When dusk fell and outside the wind began to howl inside the lit lamps and candles seemed to shine with the glimmer of true hospitality, grace and caritas.


I would never not stop at the Granon parish albergue! Once again I have experienced special happiness and extraordinary caritas while being there. We 22 pilgrims shared our ideas while each offered personal thanks for the joy of being on his way. None will ever forget the special candlelit moments when the gracious priest and a young Korean pilgrim sang a melodious duet in praise of the Virgin Mary. What delicate beautiful sound it was to conclude a memorable evening of fellowship.