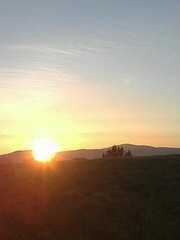 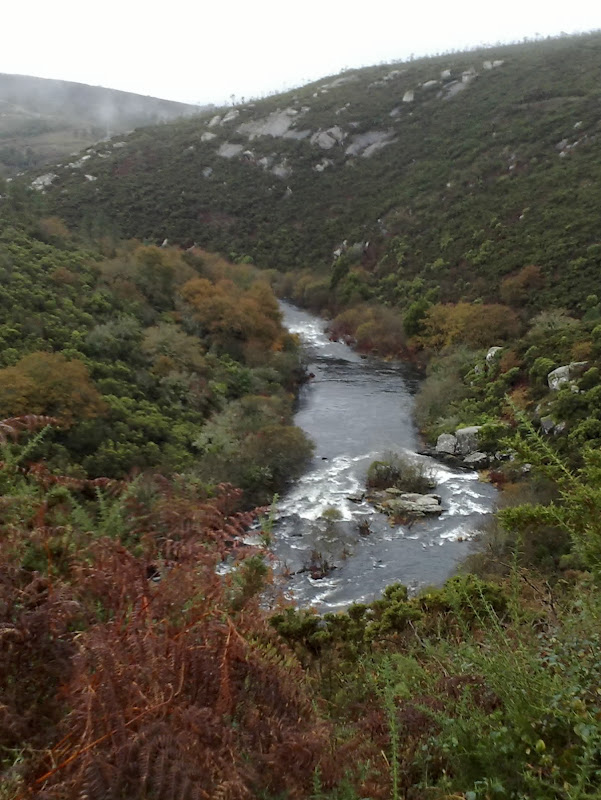 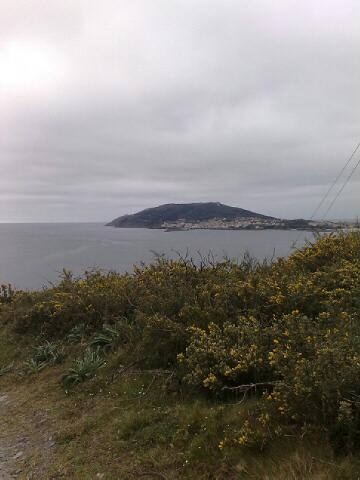 
Early without breakfast we started walking. Nearby a new footbridge crossed the Hospital River. Looking down into the cold water I was glad that it had been built! The river and nearby hamlet are named for a pilgrim hostel, which probably existed in the middle ages. Luckily one lonely bar was open; breakfast was sandwiches. The routes to Muxia and Finisterre divided. Our trail became a wide path, which slowly climbed and crossed the stony hills. Once on top in the far distance we could at last see the coast! Beneath gray clouds the Atlantic resembled silver. In all we hiked 21 k to Corcubión.

Once more it began to rain. Tony and Rob went to buy food while Cath and I went to a cash machine. For some reason my card did not work! Was this some crazy April Fools joke? Now I had no money left with which to eat or travel home! While I was wondering what to do Cath kindly offered to loan me the necessary funds. She and I then started to look for the albergue; unfortunately it was further west out of town, up a creek bed or two and along some very muddy lanes. Upon arrival we all were exhausted and soaking wet! Only one or two other pilgrims were there. The hospitalero made us supper.


Pleasant walk of 21k across stony hills and burnt moors to get to Corcubión. We are the same group of pilgrims as last night and again we shared a common supper. Thank goodness the weather was dry although windy. From atop the last hill far in the distance I glimpsed the silver sea. Magic.


In good sun under a bright blue sky I crossed the barren hills to Corcubión. Leaving the albergue in a dense fog the clouds eventually opened and from the hill tops I could glimpse the sea and in the far distance Finisterra. I can imagine the excitement of medieval pilgrims when they saw the sea for the first time. After 23 km I stopped at the pleasant hilltop albergue at San Roque near Corcubion. The Polish pilgrim and I were the only ones. The hospitalero made us dinner and we all went to sleep early.


We all awoke to a thin layer of brittle ice covering most surfaces; this was especially slick on rock and stone and the Camino would now climb up over stone for several kilometers. What to do? Luckily an Australian pilgrim, Liz, a trained trail guide came along and calmly walked and talked me up the icy trail!

After climbing an hour or so our path, now descending, became unfrozen mud. I never really appreciated walking on mud until AFTER trying to walk on ice! What a relief! At last it was easy to hike down through pine and eucalyptus forests towards the now visible sea and land's end at Finisterra.

Liz and I plus a French guy spent the night at the welcoming albergue at San Roque above Corcubión. In the dark from the dorm window we could see the last lighthouse beacon shining out to sea.


For the past two days it has been raining heavily on and off. Only a few other pilgrims were walking to the albergues at Oliveiroa and San Roque, but all arrived soaked. Since everybody was unsuccessfully trying to drip dry themselves and their pack, many puddles appeared on the floorboards!