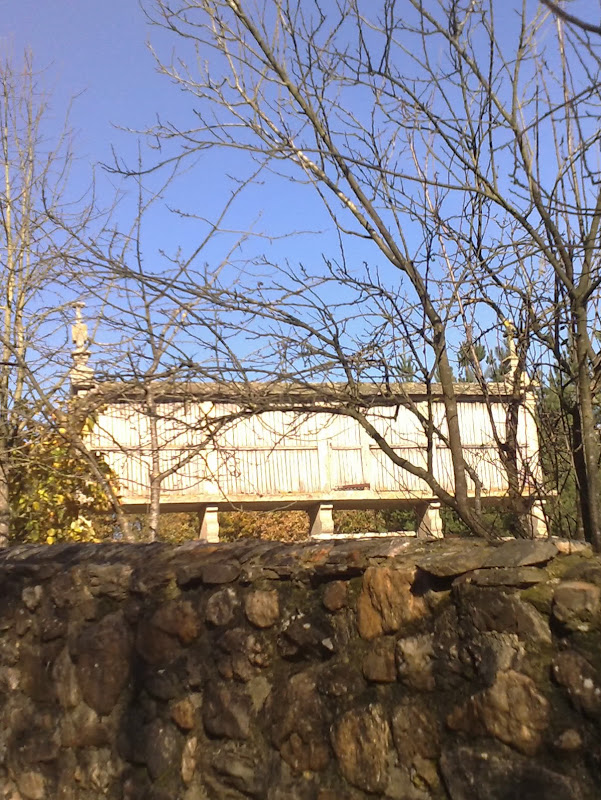 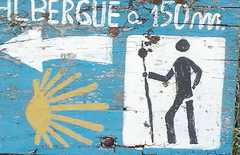 
Summer has arrived! Yesterday and today were really hot! Early morning fog west of Sarria evolved by noon into brilliant sunshine. Sweat dripped off my face as I staggered into the tiny settlement of Gonzar.

Although there was a municipal albergue I stayed in a very comfortable private one, Casa Garcia, which also served meals. It was a very attractive rehabilitation of old stone farm buildings. All the floors were black slate. Brownstone was the basic material of the walls so the mortar was tinted beige with ocher. Natural wood bunks had crisp white cotton SHEETS topped with camel colored polar blankets. No brilliant color broke the subtle aesthetics. What a pleasant surprise.


Monday walking in the early morning chill and fog I had my first battle on this Camino with diarrhea. Yikes! This can be particularly unnerving when crossing open country without any visible shelter. In desperation a large log served as an temporary screen. At such times it important to remember that sooner or later everybody has this problem!

Trudging on I decided to stop at the attractive private albergue in Gonzar where I stayed last year. This is a successful re-use of old farm buildings; natural wood, slate and field-stone have been handsomely blended. Little has been left to chance except the heat; there was none and all was FRIGID. Of course I wore my woolly hat to sleep. Since I was the only pilgrim there were plenty of blankets for tucking below and above my sleeping bag.