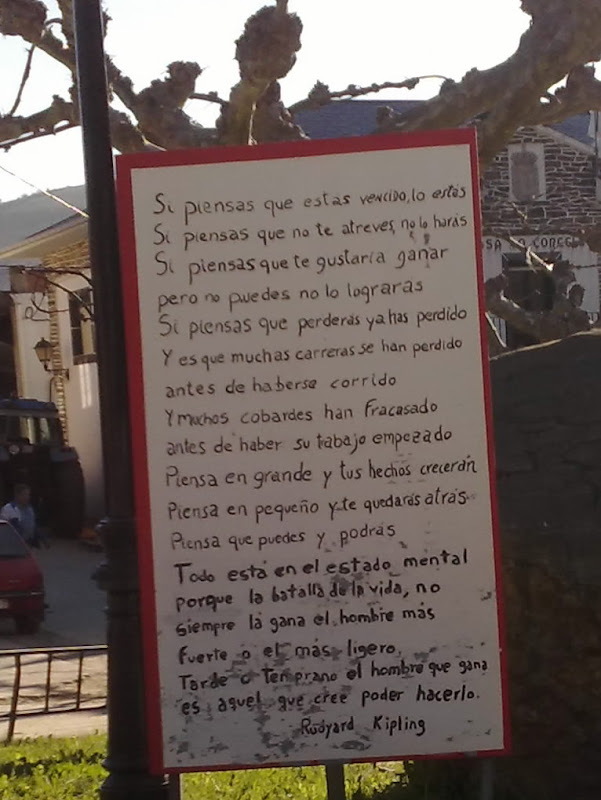 
Vowing to return someday to hike what had been missed, Mirta and I set out next morning. Winter had arrived; it was cold with thick fog. Finding the path was very difficult. Slowly we started descending through a few clusters of buildings. After a while suddenly the trail steeply climbed the Alto de Poio, altitude 1337 meters. Exhausted I staggered into the tiny wayside bar. Nervous that my weak condition was holding back Mirta, I suggested that we continue alone. After a final communal tea and toast, we wished each other “Bon Camino”. She would follow the trail and I the local road. Later in the afternoon I reached Triacastela; 21 k were enough for one day. Feeling much better yet still worried about my guts, I decided to find a private room in a small pension; I would continue to do this for the rest of my journey. After an early dinner I climbed into bed realizing that I had been hiking for 6 weeks.


While searching for breakfast I met a woman whom I had seen the day before within the restaurant. We talked about the Camino. A retired Canadian nurse she was a member of the British Confraternity of St James, whose guidebooks I had used. Her past treks were extraordinary! During the 1980s she had walked alone to Jerusalem in three months from Italy!! Such a pilgrimage would be impossible today. Once when she was walking the Camino the priest here at O Cebreiro was seriously sick. She stayed and nursed him throughout his terminal illness. In gratitude his family has given her local property where she spends much of the year. After breakfast I visited his grave.

Pensively contemplating these Camino traditions, this unique mix of divine miracle and mundane chance, I slowly continued. The trail was descending; the high passes were finished. At Linares the contemporary sculpture of a pilgrim faces west towards the open horizon. The 21 k walk to Triacastela was cold, wet and windy; exhausted I ate a late lunch and stayed alone in a private albergue, which was cozy and warm.


Walked 20k down to Triacastela in glorious weather. It was easy and the views towards the west were superb!I am staying in the same private albergue, Berco do Camino, as last year. It is warm, very clean and a great value! The owners also have a small bar-restaurant almost next door. Internet is free. Now after a good lunch and hot shower I can really relax!


We have crossed the last high peak and are now on our slow way down into Galicia. Tiny daffodils and early violets were blooming on the descending path. The topography has changed and now the fields are rolling, crossed by low stone walls. It is very beautiful as landscape.

Tonight Polo and I are staying in the same private albergue that I have used for the last 2 caminos in Triacastela. We are the only pilgrims so far. We each have an individual room, the water is hot and the baths spotless. Plus there is free internet. A first class bargain for 7 euros each. Tomorrow it is on to Sarria.


Today Mayte and I left O Cebreiro and started walking further into the province of Galicia. It was another glorious sunny day, the kind you dream about.

We stopped for a welcome second breakfast at the bar atop the Alto de Poio, the last high mountain pass of the Camino. The owner and her daughter recognized me from past Caminos. One year I stayed with them when the nearby albergue was closed. It is always a pleasure to be greeted as an old friend, but especially so on the Camino!

After the Alto the route descended through a series of switchbacks and easy tree-lined paths down to Triacastela. Now the scenery has changed; low stone walls divide vast meadows into smaller plots.

Tired and extremely rosey from the almost hot sun we staggered into town.
It was a pleasant surprise to find a Spanish translation of Rudyard Kipling's famous poem "If" prominently posted in the main square. Although written to inspire men to fight during World War One, many of the verses are appropriate for the Camino or even ordinary situations.

Tonight we two are the only pilgrims in a pleasant private albergue, Le Berso do Camino, where I have stayed 3 times. All is spotless. Now for a HOT shower and sleep!


Today through unending rain, sleet and fog a small group of us climbed up the last steep mountain pass and then descended 20kms to Triacastela. Now in a private albergue I have a small room to myself; what luxury! Outside, however, it is now sleeting so tomorrow's plans are uncertain.