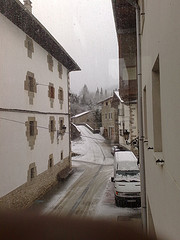 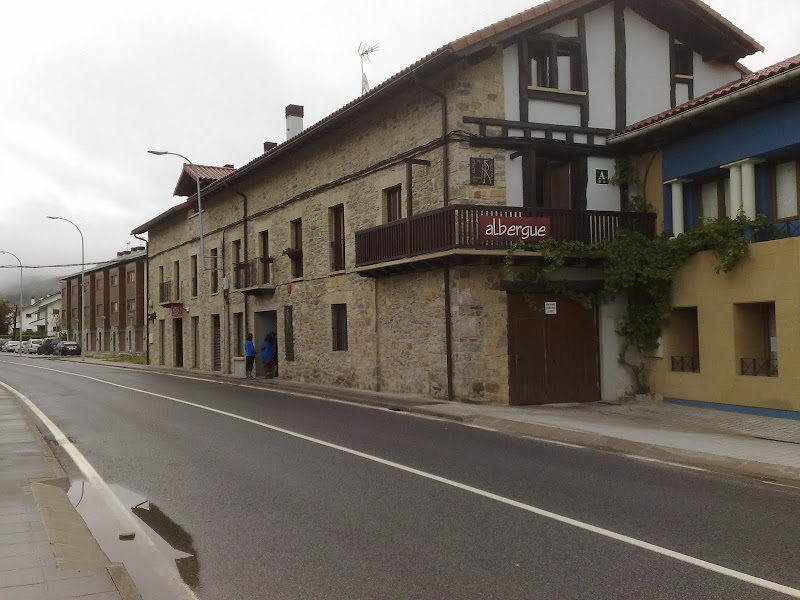 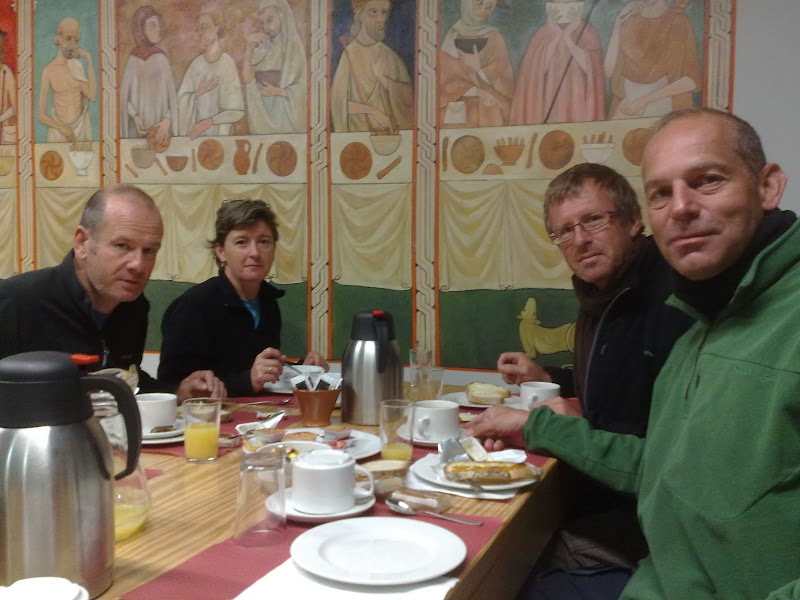 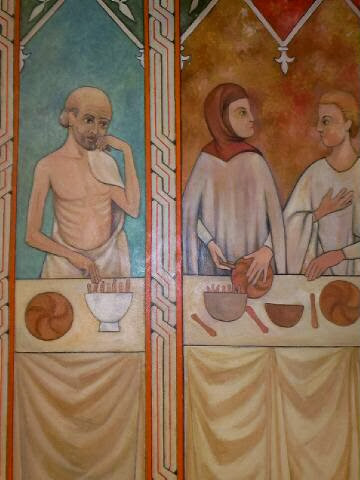 
Descending from Roncevalles into the Spanish region of Navarre beneath a black sky lit by morning stars was beautiful. As day broke the rolling landscape was covered in fog. Since the monastery had not offered an early breakfast, it was with great pleasure that after hiking an hour or so I arrived at Buegete which has an open café. It was filled with other hungry pilgrims.

The rest of the day was 20 k of relatively easy walking across farmland and several medieval stone bridges, but my legs and back ached from the day before. In one woods I met a German fellow who was truly thrilled to be doing the Camino. He had been a political prisoner in the old East Germany and this was his first ‘voyage out’. Night was spent in a tiny, very crowded private albergue in Zubiri. The town name is Basque for village of the bridge. After a picnic supper I talked with an older French pilgrim from Pau who was afraid that he was getting tendonitis. It sounded painful. Little did I suspect….


After Roncevales we, ie me and the French guy called Polo, and the Italian, named Mario began our descent. It was very tiring with lots of slippery mud. These guys had too much stuff in their packs which made everything very tiring and difficult. One kilo of pack weight per 10 kilos of body weight is a good rule of thumb. Hard to do though.

Along the way we met a couple who live in Canada and are from Venezuela. She thought I spoke very good English which, being American, I found very funny. The albergue in Larrosana was closed so Paulo and I, plus a new young Spanish couple, stopped in a cheap and agreeable Casa Rural in Zubiri. Only 14 euros apiece including a most useful washing machine.


Yesterday I left Roncevalles as dawn broke. Lots of snow covered the ground and surrounding mountains. Walking for safety on the N135 roadway and not the Camino, I trudged along. Down then up and down again; alone for 30k or 18 miles! Truly alone amidst the pines like some German storybook character. Also worried since my telephone had stopped working and I knew that Bill would be concerned not hearing from me.

Exhausted, by mid afternoon I arrived at Zubiri. Found the excellent Pension Usoa. Clean, warm and cozy; perfection! Called Bill and learned how to fix the portable. At last all was calm....Today it also snowed so I will stay in Zubiri again tonight.


20 cold, lonely kilometers across the mountain on the road in a light snow. The Camino itself was far too dangerous hidden under ice and snow to even consider. All I saw were a few horses and snowplows. Arrived at Zubiri by one pm which was great time considering the weather! Stayed in the very comfortable Pension Usoa where I have been twice before. The kind owner hugged me tightly before she showed me a warm, comfortable room.


Saturday night it poured rain. However much of Sunday was simply moist as I hiked 20km, half up/half down to Zubiri where I stayed in a new private albergue, El Palo de Avellano, next to the church. Several small traditional stone structures have been nicely converted into the multilevel space.

Rain teemed just before arrival and never ceased. Hiking in a downpour is NOT fun; since I wear glasses there is an equally unsatisfactory choice between not seeing through wet lens or not seeing because I removed the glasses. Decisions, decisions!

The albergue is packed with four-day pilgrims or those who will stop on the holiday. Easy to spot they all have small packs, often carry umbrellas and are hyper clean! To each his own.


The path has led down and west out of the Pyrenees towards Pamplona. Slowly my pack is adapting to me (or vice versa) and all now feels "Camino normal". Some interesting fellow pilgrims have passed by. In this handsome new private Zubiri albergue I am sharing a dorm and meals with four French pilgrims who started in Puy en Velay last year. They can only walk 3 weeks a year so hope to arrive at Santiago in a few years. Worried about the intense popularity of the Camino and the consequent possible loss of authenticity they were pleased to read my choice of smaller albergues offering true caritas.


Much has settled now for my long haul west to Santiago and beyond. Daily walking seems easier if not yet truly easy and the pack on my back feels quite normal. I don't carry much kit, only 6.5 kilos, but an important part of what I do carry is basic food; tea bags, firm cheese, sausage and packets which make a single cup of soup. With these basics as long as an albergue has a kitchen for pilgrim use, I need not worry about finding any open restaurant.

However recently both private albergues where I stayed offered delicious meals. First in Bizkaret, where I stopped post-Roncesvalles a new place, Curazon Puro, run by a gracious young couple provided a three course supper which was most savory with their native Hungarian spices. Tonight at El Palo in Zubiri the delicious meal was served per usual in the rustic dining room beneath an evocative neo-Medieval mural of 'breadmen'. We pilgrims, too, ate bread, but also salad, soup, fish and a yummy lemon mousse. All fuel for the next stretch of the camino.