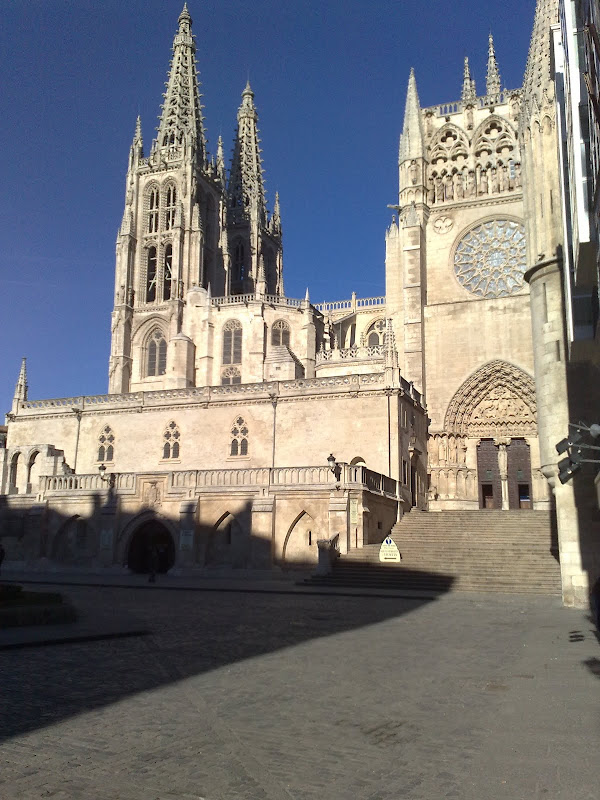 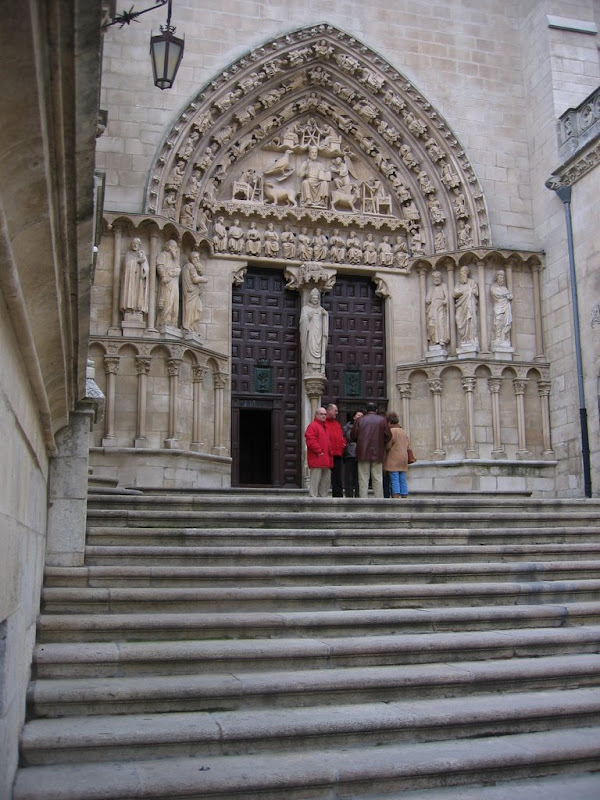 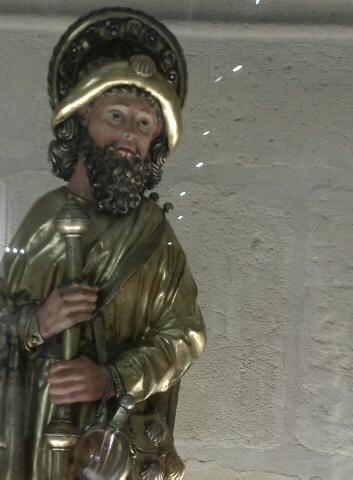 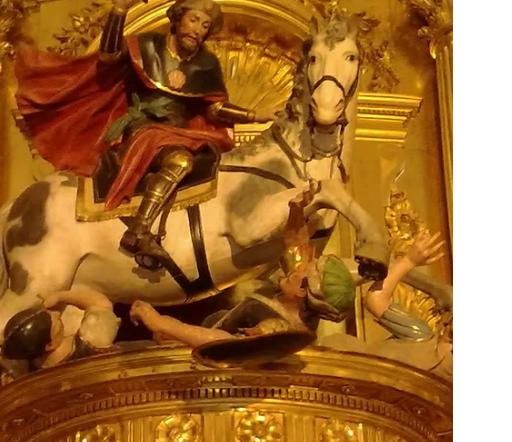 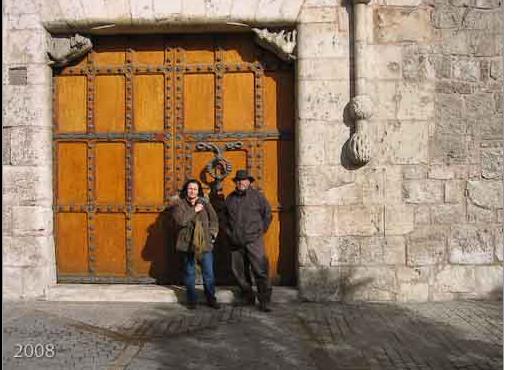 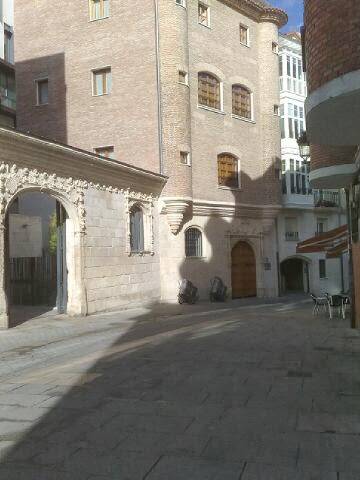 
Early next morning I met a woman feeding her pigs. She smiled, motioned for me to wait and quickly reappeared with many chestnuts in her extended hand. “For strength” she said smiling. Later pouring rain and huge trucks roaring along the highway made the 11 k into Burgos exhausting. On arrival at the pilgrims’ information office I felt ready to collapse. Luckily a new private albergue was in the next block. Spotless, with 20 bunks, hot showers, free email plus soothing Celtic music, it was perfect!

After a welcome overhaul and siesta I set out to visit the magnificent Gothic cathedral. Although the rich interior decoration was superlative, I, alas, was almost too tired to absorb it. For courage I remembered one of the timeless adages associated with the Camino, if a pilgrim makes it to the city of Burgos, he can make it to Santiago. In my case it was so far so good. Ultreia!

Within the cathedral museum are famous representations of St James in the two different guises generally associated with his legend. One is small sculpture about 30 cm high, in gold. Here he is a gentle soul wearing a broad brimmed hat and cape, holding a staff and shell. In this depiction which is the more common representation, St James has become his own pilgrim.

Near-by is his alter image where he is represented as Matamoros or the Moor slayer. As a valiant warrior with billowing red clock he rides a spirited white horse beneath which lie slain Moors.


The storm was over but it was still impossible to walk, since the next sector involved crossing the snow covered Montes de Oca. After taking the bus to Burgos we entered a café where the barman was reading the local paper. He looked up, looked down and then turned the paper towards us; our pictures were on page 3! No free coffee for the celebrities, however. We found space in the municipal albergue on the west side of the city. A series of wooden chalets filled with bunk beds and many other pilgrims, it was wonderfully warm.

Late in the afternoon sunshine I walked back to revisit the cathedral. One of my favorite representations of St James is in the treasury; small, about 30cm tall, in gold with intricate curly beard and hair, wearing his wide brimmed hat and iconic shell he holds a pilgrim’s staff complete with water gourd. Perfect.


Walked 20k mainly along the highway into Burgos. Met an interesting German couple; a policeman and a young offender. The youth was offered the choice between serving time or walking the Camino. The policeman serves as his mentor. We are all staying in a small private albergue above a tiny church in the center. All the furnishings are from Ikea! After visiting the splendid cathedral I ate a good, but pricey, dinner alone. Slowly I am feeling better; hope it continues!

After a long walk down to Burgos and across the drenched city we are the only two pilgrims tonight with the housefather in the municipal albergue which is set in a park in the far western edge of the city. This place is made of 3 connected and heated new log cabins. With the rain pouring down it seems very cozy. And now for a shower and to sleep....

We are spending an extra day of rest here in Burgos. Revisited the cathedral this morning and took many photos. Can hardly wait to hear how Super Tuesday works out. Tonight in the same chalet albergue where we are staying for free there are new pilgrims. A guy from Antwerp and a couple from Korea who only speak Korean and stare constantly.

The highlight of my day was meeting a charming French speaking hospitalero who arrived at the albergue this morning and re-discovered us in the cathedral later. She took us to visit a wonderful restored 15th century house now used as a bank. When it was a house it hosted Christopher Columbus no less. What a world. This will be my last shower for a few days, not to say last food store and, of course, last Internet. Next comes the high dry hills known as the Mesquita.


It has been a busy 2 days. Walking from Ages to Burgos was an exhausting 26k over hill and dale. Passed through Altapuerta where the oldest human skeletons have been found in Europe and then saw strange flat stone circles on a hill which I assume were laid by those early men. After such bucollic musing the junction of the Camino with Highway 1 was a jolt! At least there was a sidewalk.

Finally I arrived at the wonderful new Burgos municipal albergue. Close to the cathedral in a handsome historic townhouse with ingenious new interior spaces it is a bargain at 3 euros! I asked to stay 2 nights in order to get a bit of heated rest.

When I arrived exhausted the hospitalero was going to lunch and invited me to tag along. We ate in a Senior center and had paella, liver, and yogurt for 5 euros each. Another bargain.

Today I had to be out on the street by 8am. It was cold looking for an open cafe for breakfast. Next I revisited the magnificent cathedral. Within its priceless collection are two of my favorite images of Santiago; one as a pilgrim, the other as a warrior. The first is a small standing figure with wonderful curly gold hair and beard. His broad brimmed hat boasts a shell and he holds a staff with water gourd. The other is Santiago Matamoros where he is riding a rearing horse and slaying Moors.

Now it's time to sleep and to gain strength for tomorrow's route.


Today the weather changed to windy and cloudy; so did my luck. I got lost! Walking into Burgos has always been tedious since it entails paralleling highways . This time I chose the old N1 which mid-route suddenly became the brand new super highway A1 prohibiting pedestrians! In a frenzy I jumped a few barriers wildly crossing nearby pastures to continue west towards Burgos. When at last in the distance the windsock at the small airport could be seen I felt nearly 'home'. What a relief! Did more than twenty-five km and am truly pooped.

Walking into Burgos is always chaotic due to heavy vehicular traffic parallel to the path. From the village of Ages two ways exist; one which I just used follows a pastoral farming road up to the busy N120 highway. Then it is a long 25 km slog on an old path often shared with many racing bikers. These sleek speedy guys upon seeing my slow pace and white hair were often kind enough to stop and ask if I needed anything. All I needed was lots more pep! Nevertheless after six hours or so and two Cokes I finally made it into Burgos. No wonder that some pilgrims bus into the city. After crossing the eastern city what a wonderful relief it was to arrive at the busy sleek municipal albergue centrally located near the majestic cathedral!


While in Burgos I have pondered on two symbols found along the camino. Of course as pilgrims today we all search for and follow the famous yellow arrows which now mark the way. Initiated late last century by Elias Valinas Sampiedro the then priest at O Cebreiro and first painted by him using yellow paint begged from the Road Department these arrows in our contemporary minds have become symbolically equal to the route.

A much older camino symbol is the scallop shell. It was first associated with the hagiography or timeless legendary history of Santiago when his decapitated body was said to have been miraculously pulled from the sea near Padron, Spain; thus shells have been the symbol of Saint James and of his pilgrims ever since. Often Saint James is represented as being his own pilgrim.

My favorite pilgrim figure of James is this exquisite mid 15th century sculpture in the Burgos cathedral museum. Standing roughly half a meter tall in gold plate on silver James wears a pilgrim hat complete with shell atop his delightfully precise curls. ( Sainthood is depicted by the flat halo behind his head. ) He grips his pilgrim staff and from one shoulder hangs a tiny traveling bag known as a scrip also decorated with three additional shells. ... Thus today as I walked proudly wearing my shell while following the yellow arrows I, too, continued these symbolic camino traditions.


For the past few days I have been walking long stretches alone through dense groves of tall fern, holm oak and pine. The camino path from Villamayor to Ages via the San Juan Ortega monastery crosses a Narnia-like wood which in yesterday's incessant drizzle seemed almost bewitched.

Yet happily for me while tramping through that wood as the sun rose I sensed that special moment when everything 'clicked'. Then I realized that this was, indeed, MY way and that all was and would be good. Perhaps such secular transcendence felt while walking might be akin to what runners call 'the zone'. Your body can handle the task while your spirit glows with the effort. Neither easy, nor impossible; all simply is. Thus, you continue.

And so today I walked 26 k in 6 hours into Burgos carrying, as always, my full pack. Not bad for 74 and only 3 weeks since the exhaustion of Ibaneta! Hope my zone continues.