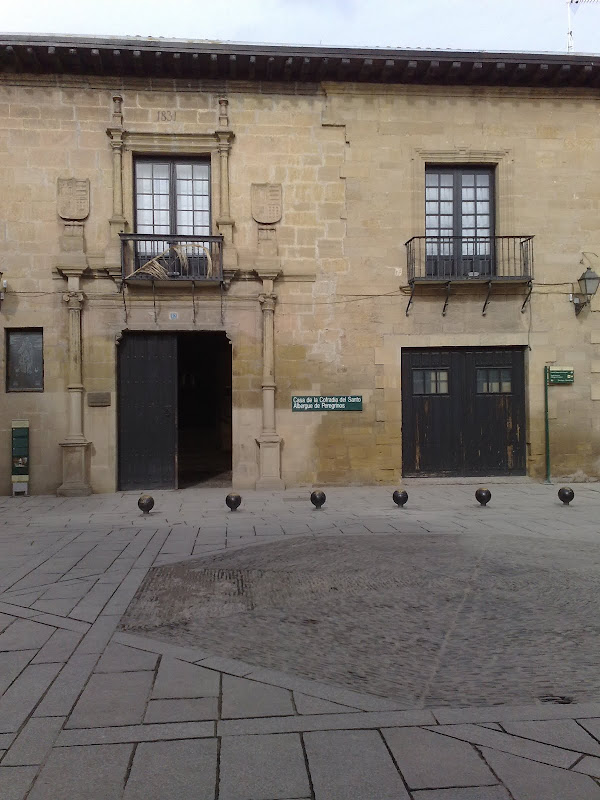 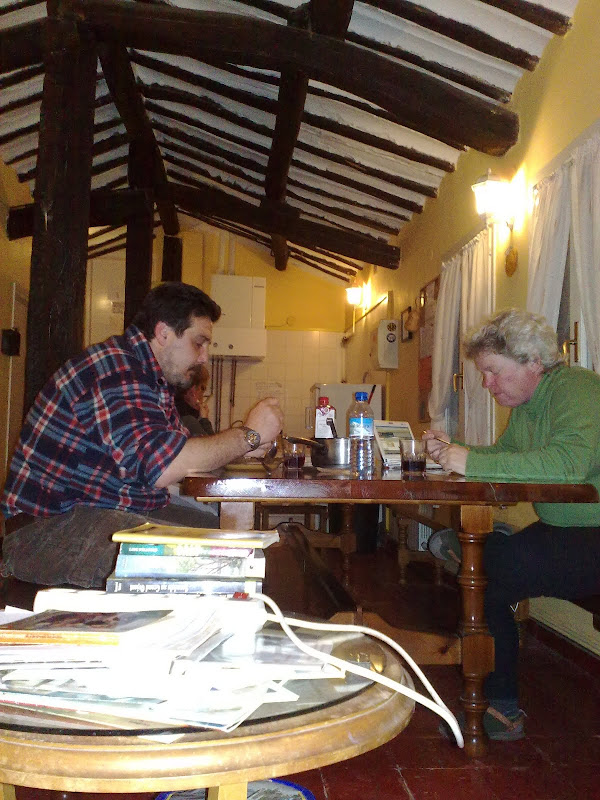 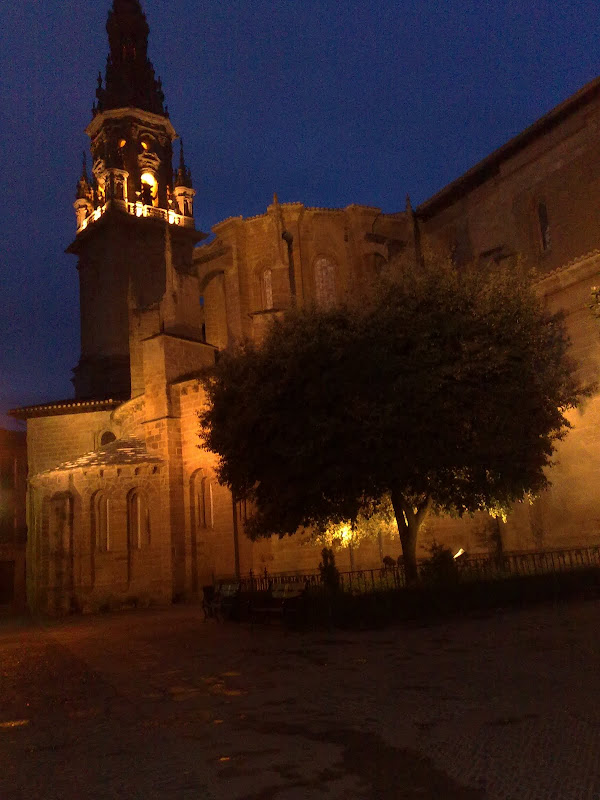 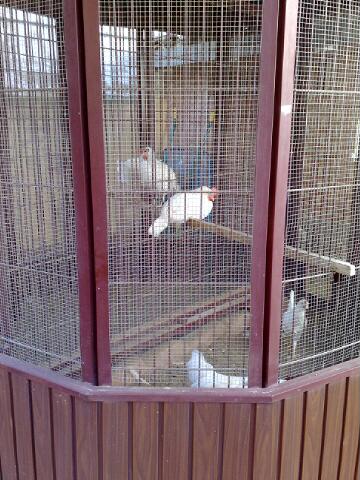 
Since the Camino climbed over the imposing cliffs, I decided to follow the road. Walking on the verges of highway 120 was pure hell in the early morning light. Huge trucks roared past. I shook from their passage and my nerves. After 6 dangerous kilometers I went back to the safety of the trail. Not well signaled it meandered across farmland, new housing developments and a golf course. Finally after another 20 k appeared the town Santo Domingo de la Calzada. St Dominic had been a monk who devoted his life to pilgrims in the Middle Ages. He also laid and paved roads. Calzada means roadway. The town typifies the city-street plan in which the Camino serves as the central spine of the city; neighborhoods grew on either side of the trail.

At the Cistercian monastery when I asked for a lower bunk the guardian smiled and handed me a number. My ‘draw’ was a tiny nook opening off the crowded dorm. Furnished with a single bed and a pile of plastic chairs, it was practically private. What a treat! Mo loved it! The nearby cathedral where St Dominic is buried is also famous for a Gothic chicken coop! In this colorful cage within the sanctuary a live cock and hen are kept in memory of a local legend involving a pilgrim and an innkeeper’s daughter. The birds are changed periodically; hearing them crow is said to bring pilgrims good luck.


It was cold but dry walking across frozen vineyards. Snow-capped mountains rose on the horizon. At Azofra my hiking staff was repaired while I ate breakfast. Mid Camino a medieval, stone cross marked one turn; how many countless pilgrims had passed this transition point across the ages? After imagining an unending timeless mob and conscious that I was treading where ‘their feet had trod’ it was doubly surprising when later in the morning the trail crossed a brand new golf course and upmarket housing estate! Tempora mutantur!

After 21 k I arrived at Santo Domingo de la Calzada. The tiny parish albergue was in an historic building close to the cathedral. Unheated it was too cold to even consider a shower. An Irish guy and I shared hot tea and talk.


Today was a long cold slog, but without wet mud. After passing the historic cross at Azofra and crossing many hills eventually I arrived at Santa Domingo de la Calzada. The sky was vivid blue and the sun bright; deep snow covered mountains to the south on my left. At Ciruena lunch at a wayside bar was delicious, hot and cheap. A crowd of construction workers from a nearby site helped me order and then watched me eat! Now I am in the same parish-run albergue next to the cathedral as before. The 3 other pilgrims are very polite young Spanish men lugging huge backpacks. Each is carrying far too much and apparently feels it.


On Tuesday the early morning light was golden, the sky pale blue and in the southern distance snow covered the peaks. We slowly climbed across the countryside to Santo Domingo de la Calzada. Upon arrival at the parish albergue there was a sign on the door to telephone a number in order to stay. Since my spoken Spanish is nil I went to the ticket office on the other side of the church to ask if they could call the number.

Raised eyebrows and cold icy stares were my reward. Finally the woman did call and we could stay. Talk about being on the right or left hand of God. Wednesday morning the albergue was truly freezing, I got up very early to visit the church and hear the famous chickens crow.


It was a hard push walking 25 k to Santo Domingo de la Calzada. Much of the way is up and out of the vineyards. There is nowhere to sit, not even a big rock. The distant snow-capped mountains are beautiful, however, especially when lit with early sunlight.

After gently climbing for at least 2 hours in such natural beauty it is a shock to finally arrive on top and find a new golf course and huge housing estate! Much is unsold and may never be sold, but the landscape is marred forever.

As I began the descent towards Santo Domingo suddenly I saw the Austrian hospitalero from Ventoso, a nearby village where I stayed 2 years ago. She still assists there but now has her own albergue in Cireuena. She is a wonderful hostess. Either spot (both are now closed for winter) would be a good stop.

When I arrived at the parish albergue in Santo Domingo that hospitalero said that the cathedral was closed for work. I asked where the famous chickens were. Usually they live in a splendid coop WITHIN the church. He took me by the hand into the albergue garden. There in an ordinary coop the chickens are spending the winter! (For a full discussion of WHY there are chickens in the church and much other history regarding the Camino read my earlier blogs for 2004-2008.)


Climbing out of Najera through the red cliffs as dawn broke this morning was both beautiful and tiring; a full moon was setting in the west as the sun rose at 8am. It was cold; a hat and gloves were a must. Dashing for an open air loo was most invigorating. I met a few curious goats en route!

By noon, however, it was very hot climbing up the pass to Ciruenla just east of Santo Domingo where I stopped for the night in an ad hoc albergue. A basic room with a PRIVATE BATH cost only 15 euros. To celebrate such luxury I washed both technical T shirts which are pivotal pieces in my skeletal wardrobe. After more than two weeks in crowded dorms the single room seemed very spacious but a bit lonely.


If little in life turns out to be as one might have anticipated this truism is particularly apt on the camino! Two days ago I set off at dawn planning to walk quickly to Najera in order to "make hay while the sun shone". Mid morning and mid stride my glasses frame suddenly broke but not the lens which both fell onto the path. Luckily I did not step unknowingly onto them! I can see close up without glasses but the distance takes on the dappled atmosphere of a good painting by Renoir. Since this is hardly an efficient way to scan for yellow arrows marking the camino path, it is a good thing that I am familiar with the general route.

Today I have rested in Santo Domingo de la Calzada doing little but looking VERY closely at handsome sculpture within the cathedral such as this of King David while waiting hopefully with fingers crossed for my glasses to be repaired.

PS. I just got my glasses back from the most helpful optician so now I'm good to go!


Yesterday walking slowly up from Najera 16 k to Santo Domingo de la Calzada was cold and VERY tiring so I asked to stay two nights here in the local confraternity's Casa del Santo albergue in order to simply rest today. Domingo after whom the town is named was an 11th century hermit who devoted his life to improving the local pilgrimage route, ie. the calzada. Buried here, he later became a saint and the village took his name. Due to a later medieval local legend of a young pilgrim's life being saved through the assistance of immortal chickens Saint Domingo himself is usually depicted accompanied by such birds.

There is an historic coop complete with chickens (changed every two weeks!) within the cathedral and over time chickens have become THE symbol of the town. In the 12th century the local confraternity was formed to help and host pilgrims as they still do today. Recently this confraternity has opened a splendid new albergue adjacent to their medieval headquarters. In the common back garden is this new contemporary chicken coop filled with the future 'church coop choir'; before dawn this morning their lively chorus announced another new day to all the dorm!


Due to injury I must cease this camino for I am no longer able to easily stand or walk. Greatly saddened I know that tonight here in Santo Domingo de la Calzada will be my last in a pilgrim albergue. Now unfortunately the time has come to stop....

Sincerely grateful for all the happiness that I have found and shared along the way during these past years I wish only the best for the future of this beloved route. Might all who walk find fulfillment; may at least my precious memories endure as long as I. Physically I may not be walking, but sentimentally I will always wear my pilgrim shell. ... Thank you for reading my blog and offering your many comments. Ultreia!

"This thou perceiv'st, which makes thy love more strong, To love that well, which thou must leave ere long." Shakespeare, Sonnet LXXIII