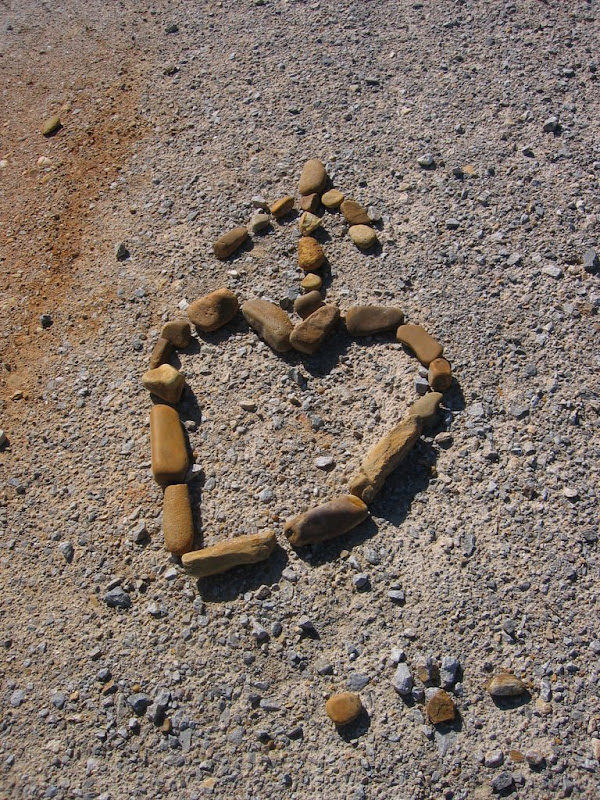 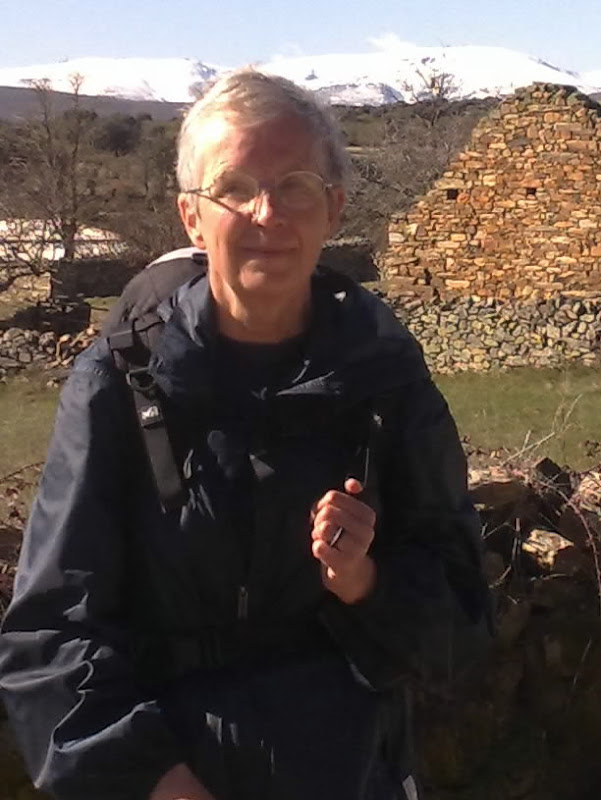 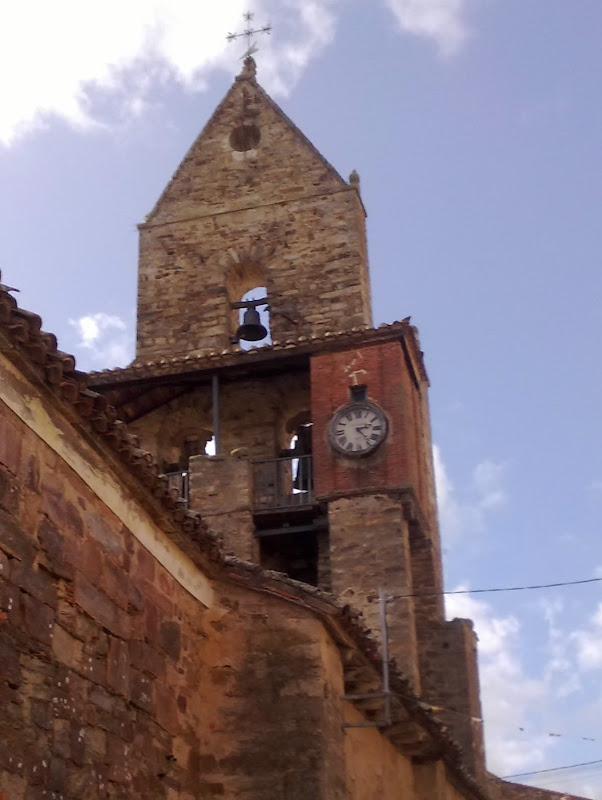 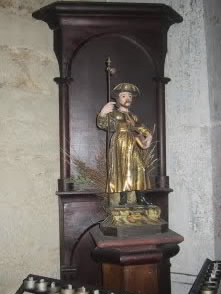 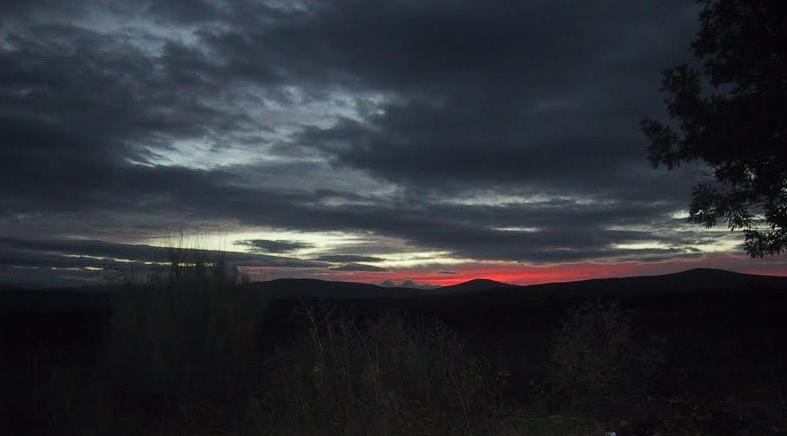 
Mirta and I continued through the area known as the Maragateria; geographically resembling the American far west for centuries it had provided mules and muleteers. After a picnic snack perched on an age-old ledge in front of the tiny wayside church in the hamlet of El Ganso, our trail slowly started to climb. Eventually we stopped at Rabanal del Camino where the refuge Gaucelmo was another special place. Named after a local hermit it had been comfortably renovated by the Confraternity of St James. The fire burning in the library was most welcome. The Confraternity, an English group of pilgrims, had also published the useful, terse guidebook, The Camino Francés, which I used.

At sunset I took an evening stroll. A small Benedictine monastery was next door, opposite was the parish church; the colors of the sky were splendid in the crystalline air and I was very happy to just be.


The perfect weather continued as the trail started to gently rise. Nothing would be flat for the next week or so. Wondering how it would be crossing those distant mountains, in 15 k we stopped at a picturesque mountain town, Rabanal del Camino. Since the albergue run by the British Confraternity of St James where I had stayed in 2004 was closed, we tried a private one. It was packed with more than 40 pilgrims and yet only one toilet seemed to be working! For comfort’s sake I went to a small hotel; S stayed at the albergue. When we met for dinner he said that he had telephoned home and now would have to leave the Camino the next day since his mother was seriously ill. Shocked we talked of little else.


Today's weather was glorious, warm with a clear blue sky. Walked about 7 k alonq a dirt track to Rabanal del Camino. Slowly the path is climbing as it crosses the orange colored earth towards the mountains. I am in the crowded private albergue. All the other pilgrims seem to have tons of baggage. Perhaps they did not carry it, but used a service. Only one loo seems to be in service. But "mind over bladder" I shall continue to say and,hopefully, stay. Last year, however, diarrhea necessitated that I move to a small hotel for the comforting convenience of private facilities.


Yesterday we walked to Rabanal del Camino where the woman that owns the only albergue open at this time of year recognized me.


Today was glorious with a cobalt sky and bright sun. As Mayte and I walked the easy 12k up towards the picturesque village of Rabinal del Camino the once distant mountains became close.

We were the first to arrive at the private albergue de Pillar; now there are about 20 pilgrims including many guys with bad blisters and one young Japanese girl. On arrival our hostess hugged me tight while recalling my earlier visits.

In the cold dusk some attended evening mass in a small 18th century chapel; the service was sung by two monks from the local monastery. Both gilded and painted in pastel tones the glorious Rococo retable had at its top a charming statue of Santiago dressed in his usual pilgrim garb. ....Leaving the service the sky was heavy with clouds and it felt like it might snow.


All had to walk this morning without any breakfast since no bar was open for 11kms! Eventually I ate some of my emergency rations, processed cheese and chocolate cookies. With a cold water chaser it wasn't cordon bleu but it sure was welcome considering the lack of any options!

Now I am in Rabanal del Camino. Got another big hug of welcome from the owner of this crowded private albergue. Since it is Saturday there are many weekend walkers as well as lots of Koreans. We all hope for good weather tomorrow crossing Monte Irago the highest point on the Camino.


Today was perfect for walking; golden autumn sunshine, pale blue sky, snow visible on distant mountains and a continuous rising path as the highest elevation on the Camino Frances, Monte Irago, slowly came into view. In the evening at the mountain village, Rabanal del Camino, I planned to attend a Vespers service in the parish church conducted by monks from the adjacent monastery.

Imagine my surprise when entering the small Romanesque sanctuary to be greeted by cozy heat as well as the Abbot who smiled as he directly asked Do you speak English?. When I nodded he then handed me a selection on St Elisabeth and love to read aloud during the service. After briefly scanning the passage, smoothing my hair, pulling down my anorak, and worrying that my wooly pants might look too messy, I went "live" in front of the assembled other pilgrims and parish members. After the service we all filed out into the frosty night.

...Later cold fog swirled white and dense throughout the village. The local bread delivery truck was parked where the camino continues westward. Dressed in "civies" the Abbot was buying two huge loaves for his monastery. As we nodded to each other I thanked him for the past evening's service; he wished me a spiritual Buen Camino and then disappeared into the white. After these brief encounters each of us would follow his own path alone into the fog blanketed unknown.


Most camino effort seems very 'normal' now. Usually rising at 7:30, I dress and pack in the dark so not to bother others still sleeping in the dorm. Breakfast is quick and shortly after dawn I start to walk.

Now that the weather is cold I like to pause after 2 hours or so for a welcome second cup of HOT coffee drunk SEATED in a HEATED wayside bar. A further 3 or 4 hours walking and I stop for the day. After checking in at the local (hopefully open) pilgrim albergue I find and eat a BIG hot lunch often in a spot where I've eaten before. Late in the afternoon it's shower time followed by a siesta. Generally I don't eat dinner unless it's communal and often my siesta is a direct prelude to bedtime since I DO get weary !

However on the camino there is little certainty; what may once have been need not always be. That's the charm of surprise. Upon arrival in the frigid mountain town Rabanal del Camino I planned as usual to stay in the large private Albergue de Pilar. However, the albergue was shut since Pilar was taking a break. At the door Pilar's mother, who is my age, graciously hugged me as a close family friend and kindly offered a tiny WARM guest room with FLANNEL sheets and private bath. What unplanned cozy luxury it is!! Every moment spent resting here is double pleasure.