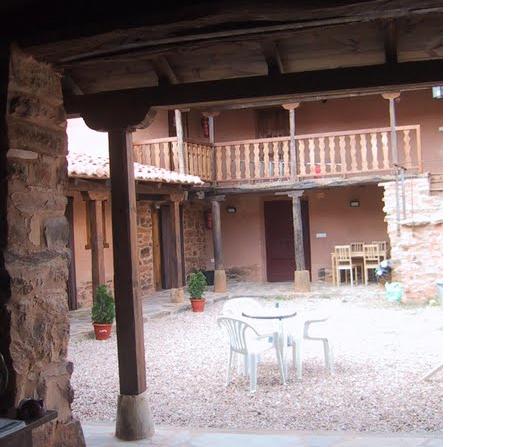 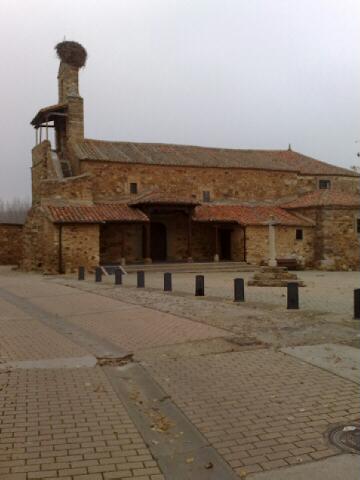 
Putting my right arm into the knapsack strap and hoisting it up hurt like hell, but the Camino called. Stiff, sore and looking like a bruised raccoon I continued in the cold and fog. Only 273 k to go! Mirta and I walked through the city of Astorga, stopping briefly at the cathedral. The Palacio Episcopal was a wonderful late19th century building by Gaudi. Its conical twists and spikey wrought iron were typical of his version of Art Nouveau style. Behind were the Roman city walls.

Further west the landscape began to change; mountains appeared on the distant horizon and the earth was more orange in color. We stopped at a handsome new private albergue in the small hamlet of Murias de Rechivaldo. Encircling a central patio were several small low structures. Most were dorms (ours had a necessary iron stove); others included a common kitchen and a dining room. Walls were the color of terra cotta, with natural wood or dark green trim. Small details had been well designed; for example in front of each shower stall were two pairs of swinging doors. In the space between the two you undressed and left your clothes, then moved through the second set to the shower stall. Your clothes stayed protected and dry.


It was a long walk across the fields to Astorga; the sky was cobalt, the soil orange and the sun hot. I took off another layer! Spring at last! However, on the distant horizon snow-capped mountains marked our future route. After a picnic lunch facing the archbishop’s palace designed by Gaudi we eventually stopped at the private albergue in Murias de Rechivaldo. It, too, is built around an open patio, but this was a new series of low volumes which used earth colored materials in the vernacular tradition. It is handsome and very comfortable. For dinner the helpful Swiss hospitalero cooked potato pancakes and chops with homemade applesauce!