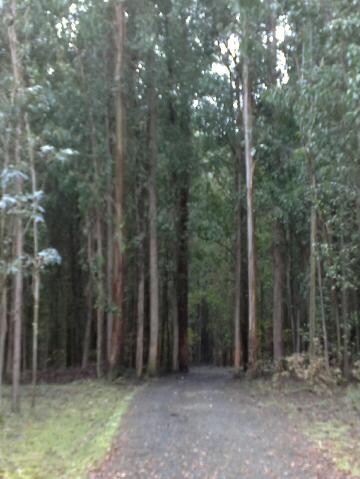 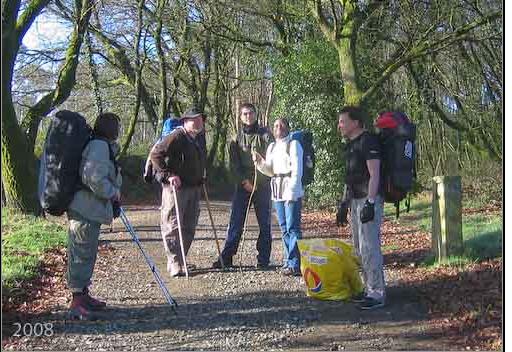 
We four walked about 19 k. For a few magical moments during the morning the sun actually shone! In the golden light the woods and trail looked enchanted. However by afternoon it was raining again with heavy winds. Outside the municipal albergue in Arca was parked the Belgian pushcart which I had first seen in Mansilla. The couple from Antwerp had been to Santiago; now they were starting their long trail back!

After supper the Belgians, the three English and I nostalgically shared our memories. Recollecting some of the places visited and the people met each of us fondly remembered his Camino. As well I recalled how in 2004 after the first immediate euphoria of arrival in Santiago once off the trail I had soon felt sad and lost. Thus, now I hoped to continue walking to the coast; the English kids said that they might join me.


Dense fog this morning so it was difficult to see the trail. However the 18k to Arca were easy, passing through woods of eucalyptus and fern. Had a good pilgrim lunch at the O Pino restaurant where I ate on past trips. Staying in the rather bleak municipal albergue; it is crowded. No heat so no shower for me. Hard to imagine that tomorrow I will arrive in Santiago!


We are now on the outskirts of Santiago at Arca. Tomorrow we shall be there! As usual I have mixed reactions. Tonight everyone is sad that tomorrow is the end.

I plan to spend two days in Santiago and then hopefully walk on to Finisterre on the Atlantic coast.