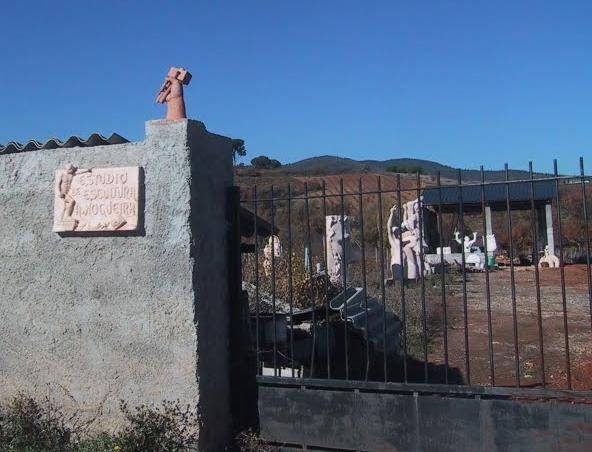 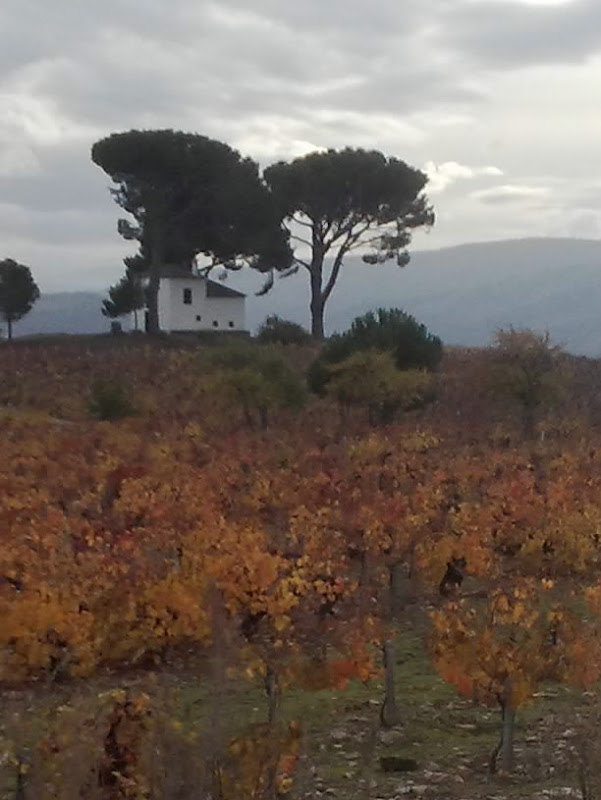 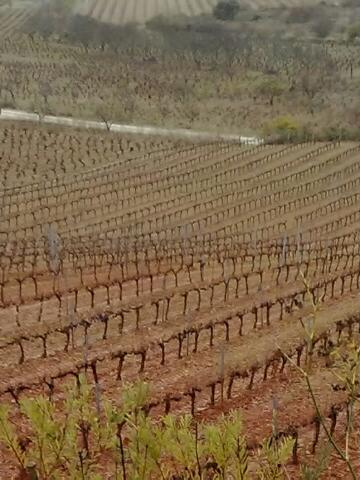 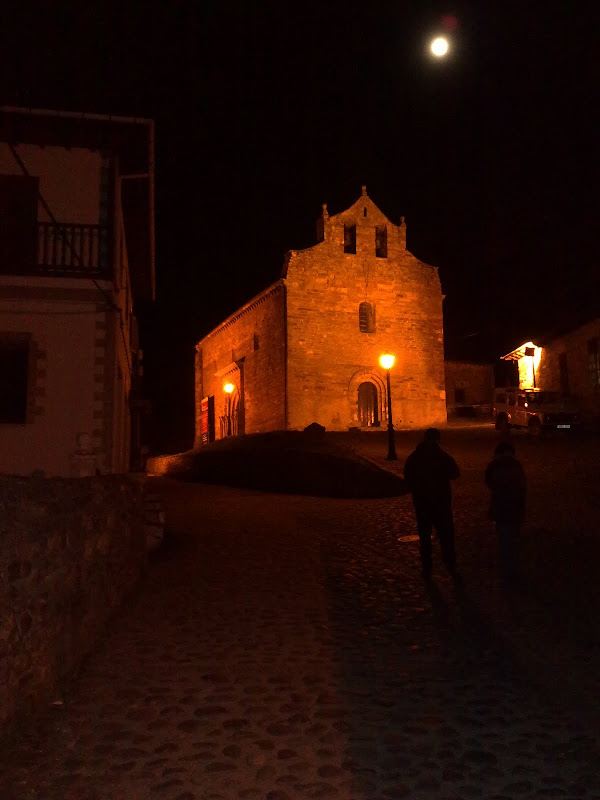 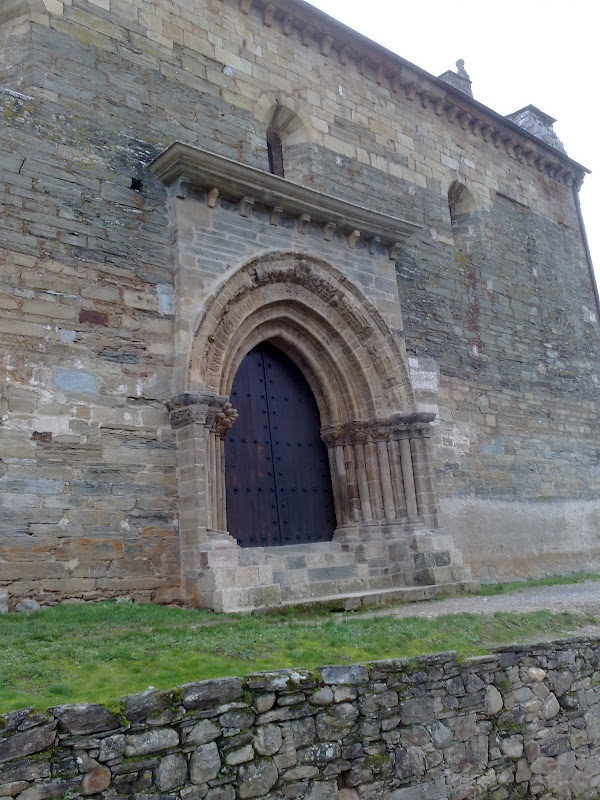 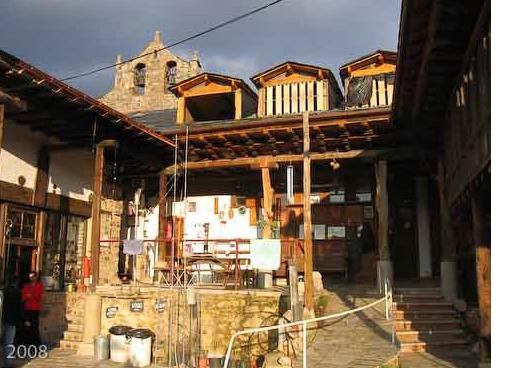 
Today we walked through Columbrianos, a strange circa 1930 company town with rows of duplex housing in concrete. Slowly the trail began to climb higher and higher through orchards and vineyards.

Suddenly near Pierros a field was filled with large 20th century classical sculpture in concrete; it was a shock to discover so much ‘art brut’.

Mirta and I trudged on to Villafranca del Bierzo. Since the municipal albergue was closed we stayed in an atmospheric private one. Several crowded dorms were grouped about a courtyard. Nearby was the tiny 12th century Santiago chapel. Stopping here medieval pilgrims too sick to continue were given the same indulgences as in Compostella. We had hiked 24 k and I was totally exhausted. During the night I was very ill suffering several bouts of intense diarrhea. Cold night air and the fact that the coed toilets were down a flight of slippery stairs and in the courtyard didn’t help! Back and forth I raced.


It was cloudy and cool as I started out of town. The Camino was difficult to follow; the signage seemed particularly skimpy. A kind old man walking his dog led me back to the trail. Slowly it started to climb up into another range of mountains; the air became cold. After passing through the almost abandoned village of Pieros I arrived at Villafranca del Bierzo. 23 k was enough for one day! Only the private albergue was open and very crowded. New hot showers had been installed since 2004 when I had stayed. It is composed of an ad hoc series of volumes and levels surrounding an open courtyard. Past midnight the dorm door banged open. A British female voice loudly complained to her silent partner “but this is just a shack!” After two voluminous knapsacks thudded onto the floor, all the now awakened pilgrims yelled for quiet!


The sun was actually hot today. Removed my jacket while crossing the vineyards;perhaps Spring has arrived! Gently climbed 23k to Villafranca del Bierzo. Staying in the rather casual private albergue next to the small church of Santiago. During the Middle Ages pilgrims too ill to continue were granted absolution at the famous church door, the 'Puerta del Pardon'.Had a delicious dinner in a nearby new restaurant appropriately named the 'Puerta del Perdon' ; it was only 10 euros and superb! What a bargain!


We covered 27 km to Villafranca del Bizero. Saw some flowers beginning to bloom including almond trees and camellias. We stayed in the atmospheric private albergue which has tidied up a bit since last year. There are now hot showers from thermal heating on the roof. The basic tone of the place is better than before. Polo and I ate dinner at a restaurant I found last year called the Puerto del Pardon after the name for the church door. We had a truly delicious dinner for 10 euros each including wonderful wine.

During the middle ages pilgrims who arrived at the church door and were too ill to continue were given the same indulgences as those valid pilgrims who made it all the wall to Santiago.


Today Mayte and I began walking back up into the mountains, but now on the west of Ponferrada. It took a long while to cross and get out of the city. Next came endless acres of rolling vineyards for the famous (and delicious) Bierzo wine. It grew more and more difficult to find the Camino's yellow arrows which mark the route. After passing through the 'lost' town of Pieros, hot and exhausted we arrived here at Villafranca del Biezro.

Since the munipal albergue is closed we are staying in the truly unique, private albergue, Ave Felix. About 20 pilgrims are crowded into one of the dorms. Over many years this place has slowly evolved as has its reputation. Everyone seems to know NOT to drink the water nor eat here!

A nearby restaurant serving delicious food and wonderful Biezro wine is the Puerta del Pardon. I ate there happily on my last two Caminos. It is named after the famous door on the local Santiago chapel where pilgrims too ill to continue once were given repentance. Unfortunately the restaurant is closed on Monday and today is Monday. We need to find an alternative fast!


The path out of Ponferrada after crossing many industrial zones eventually reached the rolling countryside densely planted with Bierzo grapes; hillsides in late autumnal tones of russet and gold stretched to the western horizon.

Spent the rainy, cold night in Ave Fenix albergue in Villafranca del Bierzo. Neither heat nor hot water, but plenty of atmosphere!