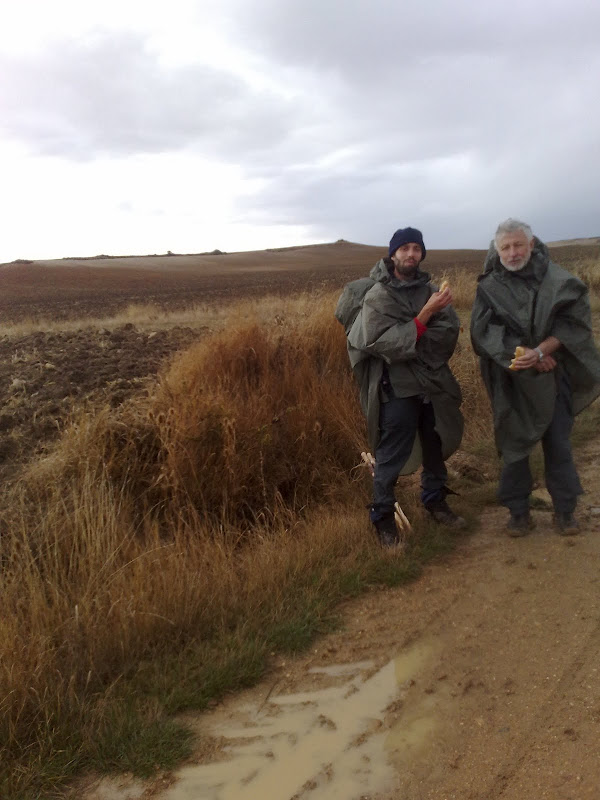 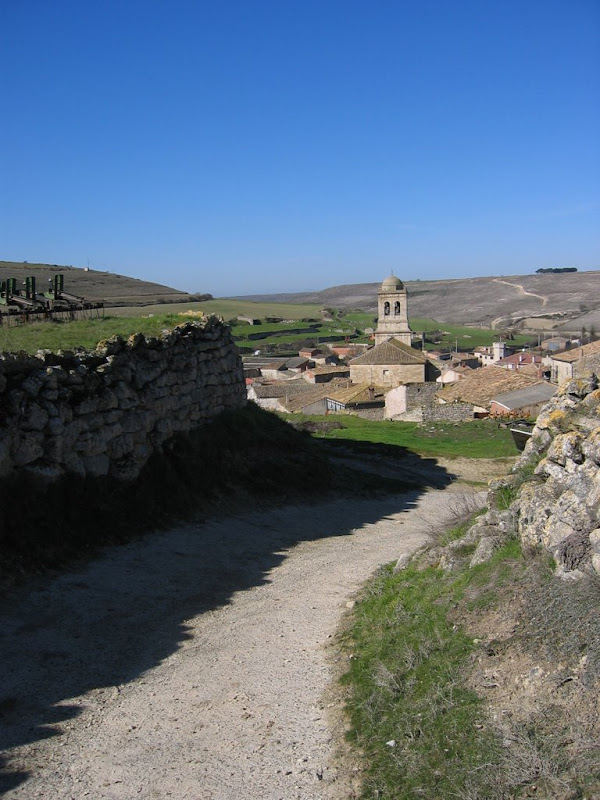 
Worried that I was progressing too slowly I walked 20 k in drizzle over ocher colored hills. Characterized by huge piles of cleared stones this bleak landscape, the immense Castillan plateau, is known as the Meseta. Treeless, it must be hot as hell in summer. I ate and slept at the municipal albergue in Hontanas. Ordinary plywood had been used imaginatively for sleeping platforms, divisions and doors within the dorm. A big fireplace warmed the ground floor dining room. Eighteen pilgrims including a fellow from Tokyo sat around one central table. Supper was soup, rice, fried eggs, salad and yogurt plus red wine. Simple but very tasty!


We continued. The bitter weather was the same with brilliant sun, blue sky, howling wind, and frozen snow. In order to keep up morale we talked on and on. Half my age and trilingual in Portuguese, Spanish and English S said that I reminded him of his mother. He could be very humorous; when he imitated Dixie accents from the American South I shook with laughter as icy tears of amusement rolled down my cheeks. What a surreal situation this was! The oddity of the setting, the disparity in our lives as well as the heady mix of banal, philosophic and absurd conversation resembled some play by Samuel Beckett! One might call it “The Snow Job”. After 10 k we arrived in Hontanas. A new private albergue was open, well heated and spotless; the showers had marble floors and limitless hot water! True bliss.


In an attempt to regain a bit of energy Saturday I walked only a third of what I did the day before. Simply went west from Burgos as dawn broke towards a new private albergue in Rabe de la Calzada. Unfortunately intense blasts of rain and wind did not aid progress.

Most of the other pilgrims in Rabe were young Koreans; in fact the guy from Seoul with whom I shared a taxi day one to Saint Jean Pied de Port was also there! To explain this Korean surge everyone assumes that a new Korean specific Camino book must have been published, but no one can identify it!

Hontanas tonight has a different mix since tomorrow, November 1, is a holiday, All Souls Day the Catholic day of Atonement when one remembers the dead. Thus tonight several male pilgrims are 'professional walkers'; these Spanish middle-aged men are usually in great shape, have very good hyper lightweight kits and often spend every holiday weekend covering great distances along the Camino. They also LOVE to recount their adventures loudly to each other as well as the rest of the dorm.

Earlier in 2004 I stayed in this attractive municipal albergue; within a small historic structure much has been built using basic plywood. Not an Ikea bed in sight! All is natural wood, terra cotta, or stone and very effective. Heated and with appropriately designed HOT showers it is a bargain at 5 euros. Now after walking 18km much of which was through VERY heavy mud, I am delighted to be so comfortable!


Setting off from Hornillos del Camino the grey sky was heavy with cloud but apparently calm, the endless surrounding Meseta hills colored ocher, and the gently mounting path dry mud. All seemed easy and I relaxed remembering earlier caminos with deep mud or even snow along this stretch. A few other pilgrims passed by including a biker in shorts. We all wished each other "Buen Camino" and kept on walking. Little did we suspect what soon would occur ahead; such innocence was indeed bliss! Suddenly the sky darkened as cold rain teemed down. Fierce wind blew and the path became heavy slippery mud. Now all was bitter cold with icy hail and it had become almost impossible to see or move. What a drenching mess!

Shaking with cold I finally stumbled down into the little village of Hontanas which has a wonderful camino tradition. The door of the municipal albergue is always kept ajar in case any pilgrim at any time needs solace. Recalling this I thankfully staggered in, found a bunk, and immediately took a blissfully long HOT shower and at last began to get warm. Four other soaked and shivering pilgrims also have found a welcome refuge here. We form quite a cosmopolitan group; an actor from Rome, a woman from Chile, a Frenchman from Le Puy, and a fellow from Korea.


For the past two days I have been following the lonely ocher camino trail as it winds across these seemingly endless hills in the middle of the vast open space west of Burgos known as the Meseta. Tonight I am in Hontanas. Other pilgrims are German, French, Italian, and British; with me as the token American we all represent the major belligerent nations of WW1. Tomorrow many of us will mentally commemorate the Armistice which ended that 4 year slaughter in 1918 at 11am on the 11 day of the 11th month. Yet tonight as the sun set together we sat and quietly sang from memory "There's a long,long trail...". With these old WW1 marching lyrics of hope and longing we emotionally spanned a century.


Once I leave busy Burgos and start to climb up and across the meseta at Rabe des Calzadas the camino seems to enter another world. Thankfully past are the hoards of camera-clicking tourists and/or pilgrims as well as the urban atmosphere with a bar at every corner. Now at last open space prevails again with wide and distant views. All has been reduced to simple basics; I am alone on a seemingly endless gravel path beneath the vast dome of an immense sky. The only sound is the companionable crunch of my boots and perhaps distant birdsong. Crossing this wilderness landscape I always 'expect' to see Saint Jerome, but hopefuĺly without any lion!!