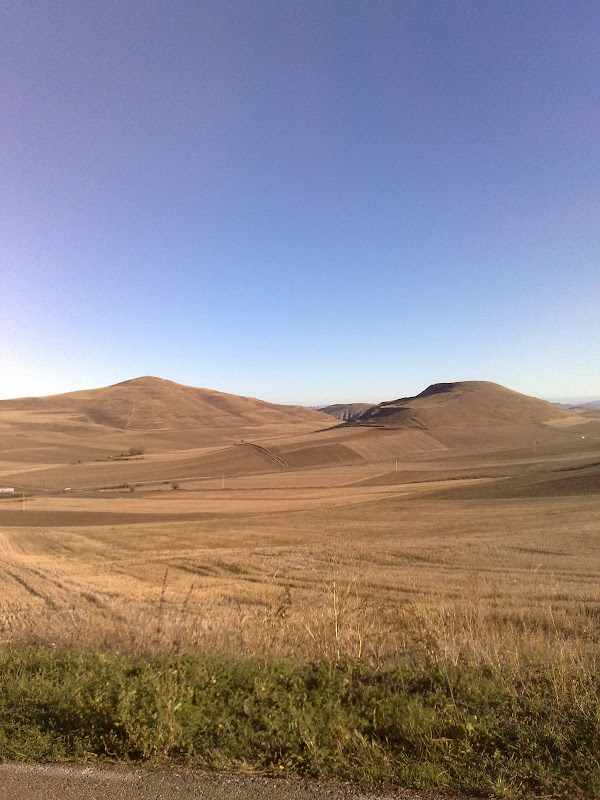 
West of Granon the trail enters the region of Castille and Leon. Relentless wind and cold air necessitated gloves, muffler and a woolly cap to cover my ears. I stopped briefly at Redecilla to see the handsome Romanesque baptismal font and shelter from the wind. The font is carved in a circular pattern depicting towers and windows.

Walking seemed easier; my knees no longer hurt. One pilgrim passed wearing a shirt that read ‘slow, but dependable’; that could be my motto! Later while catching my breath two Spanish men wearing suits came over to chat. They were Jehovah’s Witnesses. The Camino seemed an odd place for them to proselytize. After 12 more k I stopped at the brand new municipal albergue in Belorado. It was spotless, but lacked atmosphere. What a difference from the night before! Unfortunately the spring hinges of the toilet doors had been installed backwards; all night long pilgrims bruised their fingers. I, too, acquired a souvenir black and blue fingernail.


All night the wind blew. In the morning I asked about the weather forecast. “No problem, this is not the Montes de Oca”, replied the Cuban. Little did I suspect the ominous conditions hidden in his answer! Sad at leaving such a cozy place I walked 16 k across snow-dusted fields in milky sunshine to Belorado. The private albergue was cold, without heat, hot water or ambience. Fellow pilgrims were a group of noisy middle-aged German men; all snored.


Sad at leaving Granon I walked along the winding,frost covered path under a milky sun. Atop a hill a tall signpost marked the boundary of the next province, Burgos. After 15 k crossing several hills and walking parallel to the highway I arrived at Belorado. This riverside town seems roughedged like a western movie set. Early in the afternoon I stopped at a private albergue which has internet. After a shower and long siesta my legs feel better. Hopefully I am stronger.


Now the Canadians, Polo and I are in a private albergue in Belorado with a bunch of noisy and clannish Brazilians. We are all waiting for a common dinner.


Today I got up early and was walking as the dawn broke. Brown hills, blue sky and a biting wind from the west composed the scene. Shortly after the Camino entered the region of Castille and Leon I stopped for a while in the village of Viloria de la Rioja, the birthplace of Santo Domingo, the 'engineer' saint of Calzada fame. Today there is a very pleasant private albergue, Refugio Acacio & Orietta, run by a Brazilian and his wife. Their hospitality is gracious and their library outstanding! Next time I'll stay longer.

When I finally reached Belorado only one private albergue was open. Painted orange it is huge with many dorms each having 20 bunks. All is spotless and anonymous. I was alone with wonderful HEAT. However 5 Spanish guys have just arrived exhausted, cold and wet. They have walked 50k on their first day! I wonder if they will even attempt a second.