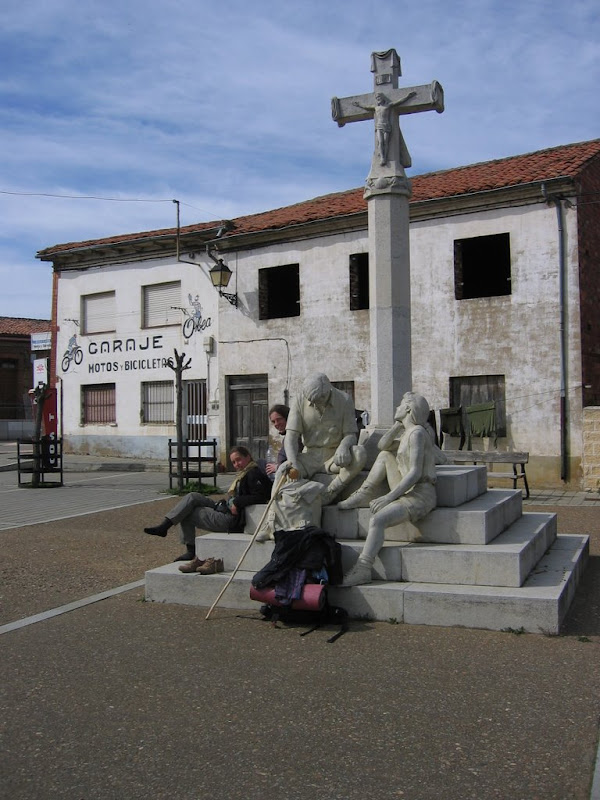 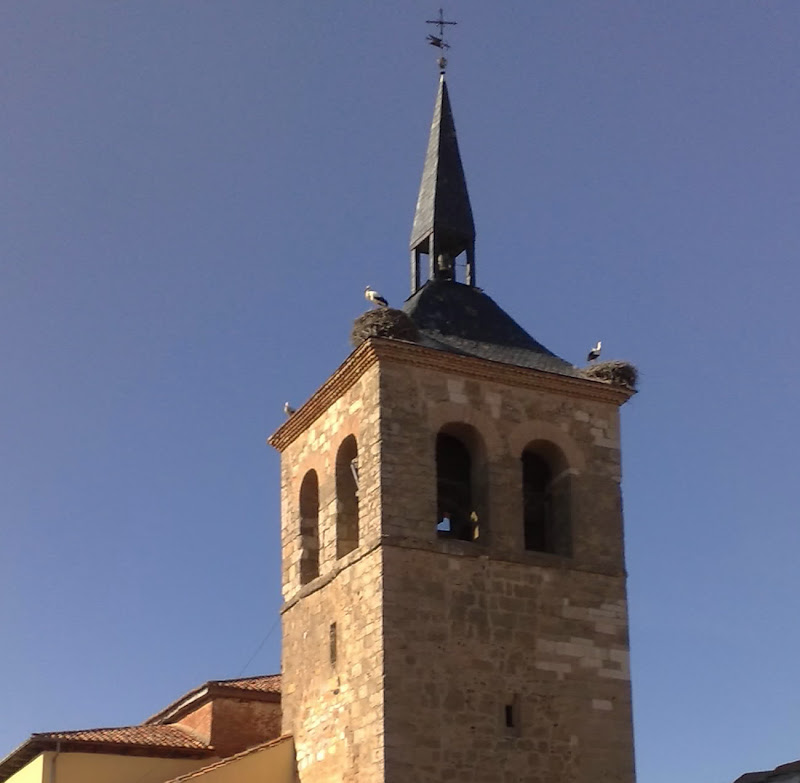 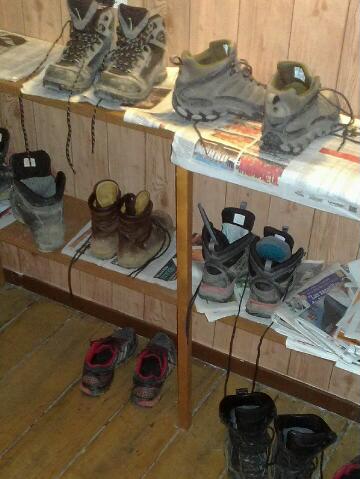 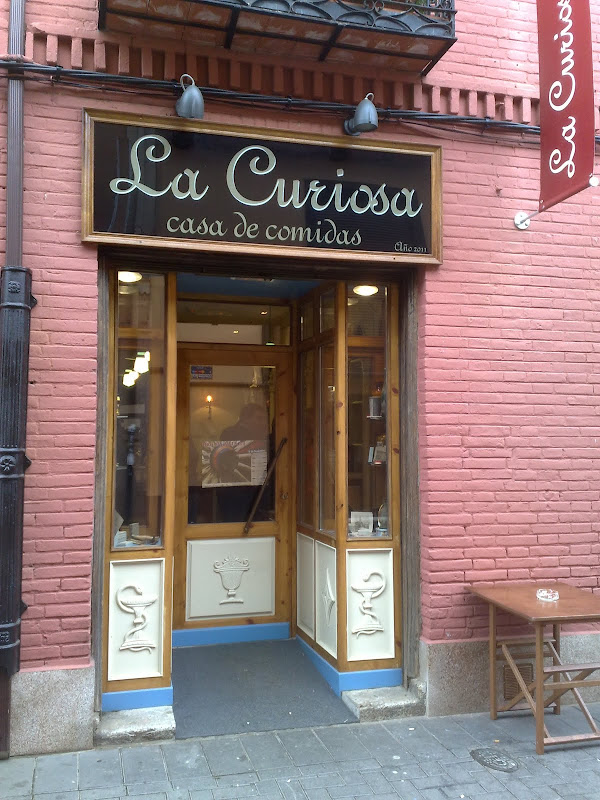 
Crossing a vast monotonous plateau dotted with arroyos or gullies after 18 k Mirta and I entered the medieval city walls of Mansilla de las Mulas. These massive walls, in some place three meters thick, were built in the 12th century using enormous stones from the river Elsa. The etymology of the town’s name is mano en silla , hand on saddle of the mules. There is a rich tradition of livestock fairs and horse sales; many vernacular buildings are adobe. Built around a central open patio the municipal albergue cum tourist office had several small dorms and no hot water. A new water heater was being installed and tested. Past midnight all were awakened by several loud bangs. It failed the test!


The 20 k trek crossed monotonous, flat fields to Mansilla de las Mulas. Recurrent tummy troubles made it especially unpleasant and tiring for me. Other pilgrims at the municipal albergue included the two men from the night before as well as an older Belgian couple. They had walked from Antwerp and had been on route since early January! Without knapsacks they pushed their luggage in a remodeled ice cream cart!! Highly motivated and intensely focused they intended to walk back to Antwerp from Santiago; early June was their estimated time of arrival home! What perseverance!


Walked 18 k to Mansilla de las Mulas. On the western horizon lie the snow-topped mountains to come. In the crowded municipal albergue the friendly hospitalero remembered me from past Caminos. Many pilgrims are about; several of us shared a jolly common supper in the attractive kitchen. Yesterday's French are still grumbling! I need a shower but it is too cold; spring has not arrived after all.


Now we are four after having picked up a Brasilian guy a few days ago. Tonight we are all in Mansilla de las Mulas.

Tonight we are all together with a nice Japanese guy. When I checked in here the hospitalero remembered me from last year. It is now cold and will get colder for the mountains come after Leon which is our next stop.

Nevertheless I am toasty in my sleeping bag and wonderful, almost never removed my athletic T shirt.


Today was another beautiful one for walking. I did the 18 k to the walled town of Mansilla de las Mulas by lunch and since the albergue door wasn't open went to the restaurant next door for the Menu de Dia. The owner, when asked what time the albergue opened, simply shrugged and hadn't a clue! Although the two buildings share a party wall their inhabitants share no words!

Eventually the albergue did open and the pleasant hospitalero remembered me from past Caminos. Polyglot and very pilgrim friendly she always keeps this place immaculate. She mentioned that tomorrow it, too, would be 'closed for repairs'. Such repairs are not ordinary renovation but FUMIGATION! It seems that many albergues were attacked by an infestation of either fleas or bedbugs last autumn. Although generally killed by winter cold professional intervention will really do the job.

Tonight there are 5 other pilgrims; 2 Spanish guys, the Danish girl, a young German fellow who has been walking since October starting near Leipzig and a French man who previously has treked to Rome. Tired and quite rosey from a day in the sun, sitting around the kitchen table all of us shared our tales.


Sunday I trekked 20km across the last flat plain from El Burgo Raneros to Mansilla de Las Mulas. Now the mountains were closer and a new cold wind was blowing sharply from the northwest. Upon arrival at the cozy municipal albergue the helpful hospitalero happily remembered me from past years. She always keeps the place immaculate yet homey which is no mean feat! I took my 'usual' bunk and the dorm quickly filled with shivering Korean and Spanish pilgrims.


Since several readers have queried me about food on the Camino, it seems appropriate to discuss when and what I usually eat. Breakfast and a big late lunch after walking are my norm with periodic bar stops throughout my walking day for coffee, hot chocolate or fresh orange juice and the loo.

In those albergues which offer kitchens many pilgrims for either dietary reasons and/or to cut costs prepare their own meals; except in emergencies I generally don't. However we all realize that today's food provides the fuel necessary for tomorrow's walking. Furthermore basic rations are always carried since the only shop or bar in town may NOT be open! My basics include tea bags, packets which make a cup of soup (even including croutons), firm cheese, small sausage, simple cookies and some chocolate. Often these same ingredients serve as a predawn breakfast hours before any Spanish bar would dream of opening!

Some hospitaleros provide delicious dinners; communal meals at Eunate and Granon are always memorable feasts. Generally for lunch or dinner many places along the way offer a standard three course Peregrino Menu (Pilgrim Menu) for 8€ or 9€. Although edible these often are only basic courses. A better alternative is the Menu de Dia (Daily Menu) which costs a bit more but provides much better quality and choice.


Monday at dawn the rain had ceased and the pale blue sky was luminous with that special glow of an early medieval painting; at last the day was perfect for walking! I walked on to Mansilla de las Mulas east of Leon where in the municipal albergue another special hospitalera, Laura, has served for many years; now she and her father manage the place together.

Over time much space has been re-purposed; what was a shower is storage, new showers are now on the patio and a tiny entry level dorm has become the supplementary dining area. Many potted plants brighten the interior and electric heaters provide warmth these cold nights. Most pilgrims cook and congregate in the comfortable kitchen where Laura offers a multitude of advice on shops, routes or blister care, etc. She greets each pilgrim personally and always gives me a big hug remembering my name and earlier visits.