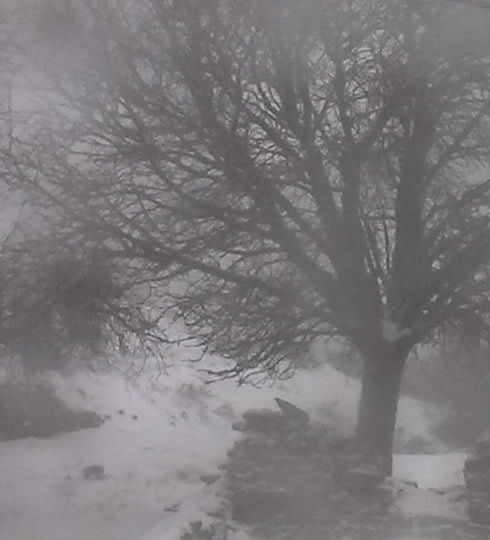 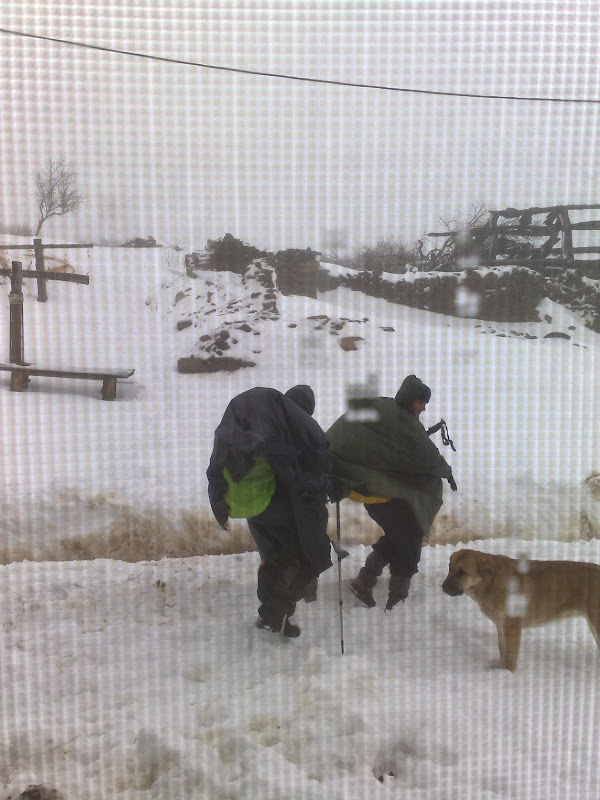 
Before dawn yesterday morning a continuous brisk noise resounded within the dorm. Could someone be stuffing plastic bags? No, sleet was hitting the roof. The weather had changed, drastically!

Nevertheless we pilgrims set off to cross the mountain. Our path grew more and more slippery. Snow began to fall; pretty at first, then stinging and very cold with an incessant wind. Walking with great difficulty on the snow-covered road after 6 k I arrived at the tiny village of Foncebadon. During my first Camino it had been a ruin.

Luckily a private albergue, Monte Irago, has been created and was OPEN. After delicious hot tea and toast Mayte and decided to stay in this warm and cozy spot. ... Now a full day later the snow outside is deep and still falling and the wind still howling. What a storm! We may be here until the spring thaw!

...Our third day here has begun. The main room now resembles descriptions of Mt Everest base camp! Several new pilgrims who were stuck at Rabinal have made it here since the storm seems to have broken. Supposedly the road is being plowed so if no change for the worse occurs tomorrow I will try to continue. Outside there are at least 75 centimeters on the ground with much deeper drifts.

Psychologically the mood this morning is a mix of Sartre's No Exit and some 1930's social realism written by Clifford Odets. Instead of being greatly relieved to find physical warmth, clean beds and good food available in the middle of a snowstorm on the side of a mountain, some pilgrims complain about the prices! Indeed, they are slightly higher than in Astorga but the stuff has to be brought in.


Crossing the high country of the Camino Frances during the past days has been VERY strenuous but the roughly 100km were majestic; the mountains are SO beautiful! At the Monte Irago albergue in Foncebadon, where in 2009 I spent 2 days snowed-in during an early spring blizzard, the morning white-out due to thick white fog brought back memories. The owner recalled me from that year of the big storm; and his cozy open fireplace and delicious meals were just as pleasant as previously.